Sepp Blatters resigns: FIFA's president resigned today, four days after being reelected, in the midst of a bribery/corruption scandal. "I am the president of everyone," he had said. Now he is the president of nobody. Assumption: Blatter knows the hammer is coming, that he likely is to be imminently indicted in the scandal. 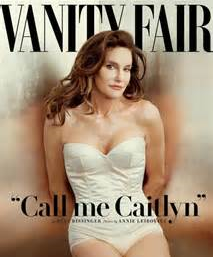 BRUCE JENNER IS NOW CAITLYN: Former Olympic decathlon champion and Wheaties box cover-boy Bruce Jenner completed his transgender transition to her this week, unveiling Caitlyn Jenner on the cover of Vogue. This is a lot for many of us to wrap our heads around. There was Chastity Bono (Sonny & Cher's daughter) becoming a man named Chaz. But clearly, Jenner is the most prominent American athlete and celebrity to transgender, at least by my eye. His periphery to the Kardashian clan and all of that attendant tabloid fame makes the story only bigger still. The attention to this is such that Jenner, on Monday, became the fastest person ever to go from no Twitter to 1 million-plus followers, surpassing Barack Obama's record. I'm curious what our readers think of Bruce becoming Caitlyn. I think it takes courage -- balls, as it were -- to do this so publicly, at this age. I say good for her. Now it's your turn. Take a dip in our poll and say why.

Canes 21, Columbia 3: Miami Hurricanes had lost at home to Columbia, 3-0, in the NCAA Regional, forcing a winner-take-all game between the teams last night. (Click on The Victim of Charming for my column from that game. I wrote that Columbia University, an Ivy League team, was a charming little story that threatened to crush mighty UM). Last night, though, order was restored, with Miami cruising into next week's super-regional, also here, a best 2-out-of-3 vs. Virginia Commonwealth.

"There are only five people still alive who were born in the 1800s. I wonder who the other four are?" --Greg Cote

HOT BUTTON (UPDATED): TOP 10 THINGS SOUTH FLORIDA SPORTS FANS ARE TALKING ABOUT: Our blog-exclusive Sunday feature is part week-in-review, part look-ahead. Hot Button means what's on our minds, locally and nationally, as the sports week just past pivots to the week ahead:

2. MARLINS: Stanton blasts awaken struggling Fish: With Cubs in town for three, the Marlins are now 4-9 under new manager Dan Jennings and last night demoted struggling closer Steve Cishek to Double-A to work on his mechanics. But Miami had won two of three at the Mets -- one thanks to four home runs including a pair by Giancarlo Stanton. (Isn't it amazing how much better Jennings seems as a manager when his team hits four homers?)

3. NBA: It's a Golden State-Cleveland Finals, as expected: From the moment playoffs began it seemed inevitable LeBron James and league MVP Steph Curry would meet in the Finals. And they will. Eventually. Game 1 is Thursday night after a full week's delay since the conference finals. Don't worry, Miami. Before long it'll be time to boo and hate-watch LeBron again.

4. HEAT: Wade camp turns up contract heat on Heat: It was reported the Heat and Dwyane Wade are significantly apart on money, and that Wade may ponder leaving in free agency. In other words, Wade's people used the media to put a little public pressure on the team. Few believe Wade actually will leave, but it makes for a neat little diversion while waiting for the NBA Finals.

5. COLLEGE BASEBALL: UM prevails in must-win, advances: The Miami Hurricanes were in the NCAA Regional championship game in their own ballpark last night and clobbered Columbia, 21-3. Miami is now two wins from advancing past the super-regional, also here, next weekend. Next time the Canes play a road game, it had better be in Omaha.

7. TENNIS: French Open passes its midpoint: It's now past midpoint of the red-clay major, and looking like No. 1-ranked Novak Djokovic could unseat French champion Rafael Nadal on the men's side. In women's half, upset-loss by defending champ Maria Sharapova appears to clear path for top-seeded Serena Williams.

9. WOMEN'S WORLD CUP: U.S. among favorites: Women's soccer owns its quadrennial stage in the month-long World Cup starting this coming Saturday in Canada, with the United States and Germany generally considered co-favorites. FIFA may be shamed, but the game is still beautiful.

10. DOLPHINS: Fins continues offseason OTAs: Miami's second organized team activity (OTA) practice day was Monday. This is all very exciting, for those intensely interested in how their team practices more than three months from the start of the season. You know you're desperate for news when the big story is the kicker being injured and out for a few weeks.

Poll result: Mixed feelings on Heat/Wade contract matter: We asked and 51.4 percent said Dwyane Wade at this point in his career should be satisfied with less money but another 41.8% said Heat should pay him the max for all he's done. The other 6.8% were undecided or unsure.