1) It is THURSDAY, MARCH 12. Congrats to my friend Bryan Baucom (pictured) for his 500th softball coaching victory with St. Thomas Aquinas High. He also is offensive coordinator for STA's vaunted football program -- one of South Florida's most successful prep coaches. 2) Feeling sexist or shallow? Click here for a video on hottest quarterback WAGs. (Yes, Lauren Tannehill gets a mention). 3) In The Previous Blogpost (ITPB): Dirty Town: On Suh and Whiteside with poll, Canes/FIU basketball, Marlins future, delights of Twitter & more. 4) Follow us on Twitter @gregcote. Also on Facebook, Instagram and Vine.

Postseason hoops: Canes tonight, FIU eliminated: Miami won its ACC Tournament opener last night over Virginia Tech, 59-49, in Greensboro, N.C., thanks to Sheldon McClellan's 16 points, strong defense and an awful opponent. But UM likely must beat a very good Notre Dame tonight at 9 to get an invite to the NCAA Tournament. FIU also won yesterday, beating Texas-San Antonio, 57-54, in the Conference USA Tournament in Birmingham, Ala., but the Golden Panthers were eliminated this afternoon by Texas-El Paso, 83-71, to finish their season 16-17.

SUH IMPACT: SETTING THE BAR ON DOLPHINS EXPECTATIONS: I attended Ndamukong Suh's Dolphins introduction yesterday and smiled when he was asked about the pressure one him. The question was 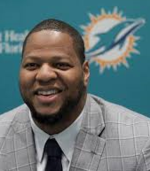 misdirected. The pressure is not on Suh. It is on (more than ever) coach Joe Philbin. As I write of the Suh signing in today's column -- love quoting myself! -- "It does not guarantee you will win or succeed. What it does is leave you out of excuses to explain why if you don't." So the question for you is how the Suh signing has impacted how you feel about the Dolphins and their chances this coming season. As I also note -- click on A Man Named Suh for the entire column -- the Pats are still the Pats and the active Bills and Jets both have improved, too. Factoring all of that, let's set an early bar on expectations for the 2015 Dolphins. Take a dip in our poll. Vote not for the option you hope for, but for the option you realistically expect, and say why.

Poll result: There is concern for Whiteside's Heat future due to temper: We asked if you were very, somewhat or not concerned that Hassan Whiteside's temper and immaturity were imperiling his future with the Heat. It was close, with 38.5 percent voting "somewhat," 37.8 "very" and 23.7 "not." That's 76.3% expressing some concern.

THE SINISTER RISE OF ROBOT SPORTSWRITERS: Click here for the sad backstory. Well, probably it's more weird than sad. The robot actually is a software program that is fed data about, say, a game result, processes that information, and produces a news story based on the data provided. So, Big Brother is not only watching, now he's writing, too. I think my job is safe (for now), but who knows? Pretty soon there  might be an app for that.

WHEN SOMETHING SAD TURNS HEARTWARMING: Some fans at a middle-school basketball game in Kenosha, Wisc., were teasing a cheerleader who has Down Syndrome. Three players walked off the court to confront the bullies. Story here.

"DEAR GREG...": "Your blog's OK but would be better if occasionally you would show a picture of Rob Gronkowski holding a bowling pin. Thank you." Dear Reader: I'll try, but can't imagine where I'd get one.

MESSAGE TO OUR BLOG FAMILY: (Note, this decision is corporate, not my own): "Starting Tuesday (yesterday), to comment on this blog you’ll need to log in with a Facebook account. We encourage lively discussion, but also believe respect and civility must be part of good debate. Your blog posts will carry the name on your Facebook account; you will have the choice whether your post also appears on your own Facebook page." Find a broader explanation here. Change affects all blogs, not just this one. I apologize for any inconvenience and thank our blog community -- the strongest on all of MiamiHerald.com -- for standing together through the change.

1) It is WEDNESDAY, SEPTEMBER 17. A belated happy birthday to Dan Marino, who turned 53 this week. Time flies like his passes once did. Fast. 2) The latest Dolfan Satisfaction Meter results, showing a sizable dip, may be found in blogpost directly below. 3) In The Previous Blogpost (ITPB): Dolphins fizzle in Buffalo, DSM poll, Heat signing, Hot Button Top 10 & more. 4) Follow us on Twitter @gregcote. Also Facebook, Instagram and Vine.

CONUNDRUM: TANNEHILL HASN'T FULLY EARNED TRUST, BUT DOLPHINS MUST TRUST HIM: I explore the curious state of Ryan Tannehill and the Dolphins in my latest column; click on Pass Or Fail to 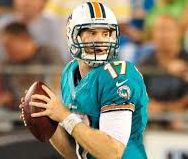 read. Two mediocre games into this third season, some fans and media already are concluding he isn't the team's long-term answer at quarterback. I say it looks like the Dolphins are afraid to find out. They are not letting him throw deep as often as they should. Sunday in the loss at Buffalo they ran out the clock with 2:21 left in the half and three timeouts (plus the two-minute warning) left. That was negative coaching betraying a lack of confidence in the man running the offense. Unshackle Tannehill, I say. It is the only way to know for sure what you have, and what the future holds. But enough of my opinion. Time for yours. Take a dip in our poll and say why you feel as you do.

his latest sneaker, the $200 LeBron 12 pictured left, a shoe whose color scheme seems to pay subconscious homage to the NFL in the city he left behind. Of more interest, it seems LeBron also has quietly also unveiled a new hairline that has reduced his growing expanse of forehead. Check out the before and current pics at right.

ON CANES QB KEVIN OLSEN: [Update: UM released the following statement in its entirety: "Kevin Olsen is no longer a student at the University of Miami. We wish him the very best in the future."] My original post: I have a personal policy to not criticize

college athletes as I would pro athletes. Kevin Olsen (pictured in this week's police mug shot) makes that a challege. UM's oft-suspended quarterback is suspended again after his latest off-field issue, a DUI arrest with a fake ID -- dropping an unneeded distraction onto Al Golden's lap as the team prepares to play Nebraska. I temper this with a degree of sympathy, because it has become obvious the kid has an alcohol problem. He needs help and the school should try to give it as a last step before cutting ties altogether.

NFL PIX 'N FANTASY: WEEK 2 DIPS: We update you briefly every week on how we

did the previous NFL weekend with our published predictions and with our fantasy-league team. Pix: We went 9-7 overall in Week 2 and 8-8 against the spread, nailing our Upset of the Week call ("Aawwk!") with Cowboys winning at Tennessee. Fantasy: Thud! Greg's Lobos fell to Earth like the Dolphins, losing 136-90 with nobody topping 15 lousy points.

"the State Heisman." This is a cumulative weekly list of the most productive quarterbacks, running backs and receivers from Florida's seven FBS college football teams: Miami, FSU and Florida, FIU and FAU, and South Florida and UCF. Our past two season SOPY winners have been FSU QB Jameis Winston (2013; 2,107 points) and Canes QB Stephen Morris (2012; 1,900.5 points). Our simple formula awards a half-point for every passing yard and one point for every rushing or receiving yard, with six points for every TD scored or thrown. The SOPY Top 10 entering Collball Week 4:

WORLD'S FIRST 3-D PRINTED CAR: This technology is beyond my comprehension -- I still listen to CDs -- but I find this fascinating. The Strati (pictured), a two-seat electric car with a range of 120 miles and a max speed of 40 mph, has been unveiled at a Chicago auto show. It was manufactured with a 3-D printer by Local Motors of Phoenix. The Strati will cost between $18,000 and $30,000 when it goes on sale later this year. Click here for the backstory.

Check back a lot daily because we update and add to our latest blogposts a lot...