LeBron makes Best-Dressed list: Heat be-all LeBron James adds yet another honor. Pictured left in all his sartorial eloquence, James is one of three athletes on the 74th annual International Best-Dressed List out today, and appearing in the September Vanity Fair, along with Patriots prettyboy Tom Brady and Rangers goalie Henrik Lundqvist. Remember when Dwyane Wade was considereed the Heat's bon vivant on clothing and style. Apparently LeBron has now even passed him for that.

DOLPHINS VS. CANES: FIRST TO 9 WINS WINS?: I leave it to others to magnify and dissect this week's Dolphins stadium scrimmage as if it were particularly significant or illuminating. It was neither, of course. It was a dressed-up practice and little more despite the packaging. We can't know for sure

at this point how good (or great, or bad) the Dolphins will be this season, and the same goes for the Hurricanes across town. But we do know this: It's a close call which team should win more games. Bovada sets the Canes' victory over/under at 8.5 wins (in a 12-game regular season) and the Dolphins' over/under at 8 wins (up from 7.5, in a 16-game season). Our two biggest football teams have finished tied with the same number of wins -- excluding postseason games -- 14 times in 47 years, including each of the past three seasons. Will we have a fourth straight tie? If not who'll break it with the most victories, Canes or Dolphins? I know many of you are fans of both teams, but your dispassionate outlook says what? Vote now, say why, and check back to monitor evolving results. 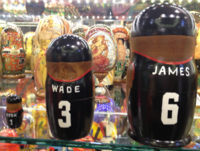 RUSSIAN HEAT DOLLS: Russian nesting dolls of the Heat's Big 3 feature a very large LeBron James, a medium Dwyane Wade and a tiny Chris Bosh. Which, come to think of it, mostly sounds about right. But the Mario Chalmare and Ray Allen dolls also are bigger than Bosh. Now that's cold.

Golden Touch: Canes land 4-star recruit: The U got a big football committment from four-star defensive end Trent Harris out of Winter Park, whose suitors included Florida, FSU, Alabama and Ohio State. Click on Golden Touch for my related column on how UM coach Al Golden's steady hand has impressively guided the program through the long NCAA mess he inherited.

ARE MARLINS SLOWLY WINNING BACK FANS?: So many Marlins fans are estranged because of owner Jeffrey Loria, but games like Sunday's will chip away at that cold war by degrees. A towering, game-winning home run by Giancarlo Stanton putting a 'W' on rookie pitcher Jose Fernandez's 13-strikeout performance -- now that's how to stake 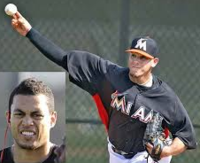 your claim to brighter days ahead. It's a shame that the club dumping unpopular hitting coach Tino Martinez stole the day's biggest headlines, because the story of the day and increasingly of the season is the way Fernandez is grand-marshaling an impressive parade of rising Marlins talent. Fernandez is pictured with Stanton (inset). I don't know of any team that has a younger, better, brighter-future bat/arm combo than Stanton (23) and Fernandez (20). Certainly no other South Florida pro team has a more dynamic duo of rising stars. The team that began the season an abysmal 13-41 is since a credible 27-24 even with two straight losses. The upturn only somewhat justifies Loria reverting to a much lower player-payroll, though. The good-faith obligation he has to spend more remains, and estranged fans are paying attention. The offensive lineup still is a huge issue that must be remedied by spending for a veteran bat or two before next season. Miami is last in MLB in runs per game (3.18), home runs (62) and batting average (.232). The best chance to keep Stanton long-term, against long odds, isn't just money. It's protecting him in the batting order with surrounding talent. Signs are evident, though. The Marlins have a lot of young, emerging talent. With an owner willing to augment that with spending for complementary veterans, this could be a very interesting team very soon.

Tino explains the unraveling: Defrocked Marlins hitting coach Tino Martinez told FoxSports (click here) that an escalating argument with three players over picking up baseballs in the batting cage led to his resignation. Players were Justin Ruggiano, Derek Dietrich and Chris Valaika. They balked at one of the sport's unwritten rules and their coach overreacted, handled it poorly. Four grown men. So silly it came to this.

Poll result: Expectations for Tannehill optimistic but reserved: We asked what you expected QB Ryan Tannehill to become in his Dolphins career and most, 42.8 percent, voted "very good." However more said only "pretty good" (27.0%) than "great " (16.1%). Another 11.1% voted "fair/OK" and the remaining 3.0% voted "a disappointment." Our conclusion? Confidence in Tannehill is fairly strong, but only 1 in 6 voting "great" indicates he has much still to prove.

U.S. SOCCER GETTING CLOSER TO ITS GOOOAAALLL!: We don't do enough with soccer in the blog, but happily the U.S. men's national team is forcing our hand. The team's first CONCACAF Gold Cup crown since 2007 marked the first international title under coach Jurgen Klinsmann, and the Americans have now won a U.S.-record 11 straight int'l matches. That's a big tailwind entering the September resumption of World Cup qualifying. The Gold Cup verified that veteran star Landon Donovan remains in his prime, and a lot of rising young talent now surrounds him. Time for America at large to start paying attention. 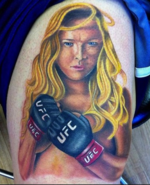 DECISIONS ONE MIGHT LIVE TO REGRET: "OK it seemed like a good idea at the time, right? Had I been drinking? Um, well, sure. But only for three or four hours. Anyway, we lurch past this tattoo parlor and there's nobody there but the ink guy, probably 'cause it's, like, 4 a.m. So we go in, and I tell him what I want, and I though he did a great job. Only the next day, as I'm stepping out the shower, do I discover my wife is not a big Ronda Rousey fan at all."

Click back. We'll be updating/adding to this latest blogpost...