1) It is MONDAY, AUGUST 21. R.I.P., Jerry Lewis, 91, and Dick Gregory, 84, two men with very different approaches to comedy, each a genius in his own way. 2) Dolphins time! Know any die-hard Dolfans? Surprise and delight them with our new book on club's first half-century. Learn more or order here: Fins At 50. 3) In The Previous Blogpost (ITPB): Miami impact in Top 200 fantasy rankings, Dolphins lose Fake Game 2, my call for open Fins QB competition & more. 3) Join us on Twitter @gregcote. Also Facebook, Instagram, Periscope and Snapchat.

Latest Sunday column: Priority for new Marlins owners should center on keeping Stanton: As Giancarlo Stanton powers through his best season with a majors-leading 45 home runs, the incoming new owners fronted by Derek Jeter should make a priority of committing to making Stanton a career-long Marlin. Click on Stanton the Litmus Test For New Owners to read. 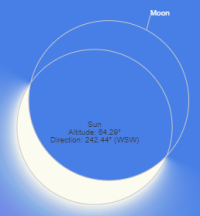 HAPPY SOLAR ECLIPSE MONDAY!: I'm no astronomy nut (although I do proudly own and wear a T-shirt commemorating the great Pluto after its unfortunate 2006 demotion from full planet), but am looking forward to experiencing the partial solar eclipse Monday afternoon. It is projected to begin in South Florida at approximately 1:25 p.m. and end around 4:20, with the maximum eclipse seen by us at 2:58. Pictured is an illustration projecting the maximum eclipse we'll see in Greater Miami -- assuming fair weather and no cloud cover, of course. Weather will be a crapshoot. The forecast for this afternoon is partly cloudy, with widely scattered thunderstorms and a 20 percent chance of rain, so let's hope we get a good look at the eclipse. It'll be a bummer if the day is dark and overcast because of the weather. You need a sunny day for a partial solar eclipse to really stand out. Based on the illustration it seems as if the sun (weather willing) will be visible to us only as a sort of lopsided crescent grin when the eclipse is fullest. It looks to me as if we'll have around an 80 percent eclipse. Anyway, enjoy the wonder of science or the majesty of God, depending on your point of view. Either way, enjoy the marvel of a rare treat! 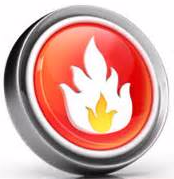 1. DOLPHINS: Fins any good? Week in Philly, 'dress rehearsal' may tell: Opening win, then lopsided loss. Who are these guys? Will they be any good with Jay Cutler? Does adding veteran LB Rey Maualuga help? Best answer yet may come this Thursday night in Philly as Fins culminate a week of shared practices with Eagles because Fake Game No. 3 is traditional “dress rehearsal” where starters play a lot. So. Will the real Dolphins please stand up?

2. MARLINS: Stanton out of the park, Samson just out: It was reported Marlins president David Samson will be out once Jeffrey Loria's sale of club to Derek Jeter group is final. Meanwhile Giancarlo Stanton -- with MLB-leading 45 homers after one Sunday -- continues to make a so-so season matter. Stanton has a chance to hit 60 unless cowardly teams start walking him.

3. HURRICANES: UM look solid as opener nears, except...: Looking like Malik Rosier or Evan Shirreffs for the starting quarterback job after Saturday's scrimmage. Season opener vs. Bethune-Cookman looms in 12 days and Canes look like ACC contenders. Well, unless you're concerned about the minor matter of an unproven QB operating behind a suspect offensive line.

4. FIGHTING: Mayweather-McGregor: Ready, set, hype!: Only five more days until unbeaten boxer Floyd Mayweather and UFC star Conor McGregor will be in a Vegas ring this coming Saturday. Mayweather is heavily favored, but, with both men so unlikeable and such idiots in the buildup, can we please fix this thing so they simultaneously knock each other out?

5. HEAT: Hey, more Dwyane Wade speculation!: It was reported a Wade-Heat reunion may yet happen, based on a Chicago writer writing that Wade "is expected to reach a buyout agreement at some point in the next few months." Would you please wake me when what might or might not happen in a few months actually happens.

7. GOLF: U.S. women trounce Europe to win Solheim Cup: There was a South Florida flavor as Miami native Christie Kerr and especially Lexi Thompson from Coral Springs were instrumental in the U.S. routing Europe 16 1/2 to 11 1/2 to win the Solheim Cup match-play event in Des Moines, Iowa.

Missing the HB10 cut: Nick Saban ranted against media predictions, saying, "Why do we play?" Here's another question, Nick. Should a man being paid $11.1 million to coach Alabama be complaining about anything!? ..... How much longer will it continue to be news that an NFL player sits for the national anthem? That reminds me. The Smithsonian will have a new exhibit featuring Colin Kaepernick items. Will one of the items be an unemployment check? ..... They're talking about taking down the Marlins Home Run Sculpture. What, is it linked to the Confederacy? ..... LeBron James called for healing and love in the wake of the violence "in Charlottesville, North Carolina." Hey, he's a baller, not a professor of geography!

Note: Marlins have today off.

Select other recent columns -- Double QB Quandary A Rarity (On Dolphins, Canes' shared upheaval). New Owner, New Hope (Let's party at news Loria agrees to sell to Jeter group). A Diamond, Shining (Giancarlo Stanton's great season). Immortality Calling (Jason Taylor in Hall, now who's next?). Also: Right Time, Right Quarterback. The Uncommon Pressure On the Miami Dolphins. Blockbuster Would Be Slumpbuster for Riley. Paroled But Not Free. Don't Hold Your Breath. An Ageless Wonder, Even In Defeat. All-Star Week Proves Miami's Baseball Potential as Loria Era Ebbs. The Gentleman-Athlete Earned Our Thanks. Heat Lose Twice On Hayward. Bam Is Due Benefit Of Doubt. Make Fun of the Farce, But You'll Watch. No Parade In Sight. A Fall From Greatness And From Grace. NFL's Moral Obligation. The Dolphins' Eight Ifs. Home Run For Miami. The Jose Statue's Positive Purpose. An American Tragedy. History Breathes at UM Sports Hall. Is There A Team Brave Enough for Kaepernick?. Thank You, Mae Riback. A Ghost Tour of Miami's Sports Past. The Miracle of Liberty City. Thank You, Edwin Pope.

A CRYING SHAME: THE UNRAVELING HEAT:   [Update: Heat lose at home tonight to Portland for Miami's fifth straight loss and sixth in seven games]. Coach Erik Spoelstra was wrong to make what's private public and tell the world some of his players were crying Sunday after the team's fourth straight loss and fifth in six games. Amazing how CryGate has taken off as a national story. I was on ESPN's Outside The Lines, on The Sporting News national radio and on with Tony Kornheiser just in the past 24 hours, talking about it. That the star-studded Heat are crying makes it that much easier for all but Miami fans to laugh. This is not a team built to inspire sympathy (let alone patience). But the crying matter, of course, is peripheral to the point, which is that stars LeBron James and Dwyane Wade have been chokers more than clutch when needed most lately. And that Chris Bosh (one shot in the fourth quarter Sunday) is too acquiescent to the Big 2. And that the center position continues as a huge weakness even as the point guard spot has improved. And that the bench is weak. And that Mike Miller (one point in 31 minutes) continues as an erratic disappointment. And that Miami sorely needs Udonis Haslem back on the floor as much for the emotional lift as the rebounds. Suddenly, Miami slipping to a No. 4 playoff seed seems possible as championship hopes run away. What to do, what to do? I present two Heat polls here. the first is on who should have the ball in the closing seconds. It's been LeBron, but that ain't workin'. I think Miami should give the team and the ball back to D-Wade, who obviously wants it. The second poll is on the coach. It is admittedly most likely a moot question because I honestly don't think Pat Riley wants to coach again, or will. But it's still an interesting discussion point.

CHAD OCHOCINCO CASTS FOR DOLPHINS: Perpetually dissatisfied Chad Ochocinco-or-is-he-Chad Johnson-again is lobbying for a trade out of Cincinnati and putting out feelers to get back to his hometown of Miami. "The Dolphins have always been my team since I've grown up," he recently noted. Stop it! Just stop it. Please? Chad is 33 now, and Miami already fulfills the diva-receiva quotient with Brandon Marshall. If the Dolphins are thinking trade with Cincy, QB Carson Palmer is the guy they should try to pry loose, although Miami's lack of a second-round draft pick would hinder that possibility even if there were interest.

PANTHERS TALK!: I have a new column online and in Tuesday's pulp edition on the Florida Panthers and the task facing GM Dale Tallon. Why? Because sometimes the intrepid columnist must delve into topics he knows won't generate a slew of online hits. Somehow, inexplicably, it made today's top-10 columns list on USSportsPages.com.

CHARLIE SHEEN STILL WINNING, TALKING: Yeah on Saturday the defrocked Two And A Half Men star debuted an online show of sorts on Ustream. Click on Giving Winning A Bad Name for details and the video. Warning: It's 13 minutes of your life you'll never get back. Charlie moves closer and closer to the homeless man wearing a cardboard shirt ambling down a busy street ranting to himself with arms flailing. Except people aren't taking Charlie as seriously.

SPEAKING OF PATHETIC...: I happened across the season debut of Celebrity Apprentice last night and noticed Jose Canseco among the participants. The hope here is that Donald Trump will pay Jose to go away and never appear publicly again.

TV'S GREATEST WOMEN: TVSquad.com names its "100 Most Memorable Female TV Characters" and the top of the list is 10. Edith Bunker; 9. Clair Huxtable; 8. Veronica Mars; 7. Carmela Soprano; 6. Buffy Summers; 5. Elaine Benes; 4. Peggy Olson; 3. Lucy Ricardo; 2. Laura Roslin; 1. Mary Richards. Quick thoughts: Have never watched 8 or 6. Have never heard of 2. I appreciate Mad Men but think 4 is way over-ranked. And Lucy should-a beat Mary. Finally, I find it interesting that all 10 of these women have one thing in common: They all agree Charlie Sheen is sad.

AND IN OTHER NEWS, NASA SCIENTISTS FIND EVIDENCE OF ALIEN LIFE: Click here. I dunno. I'd have thought this might have been bigger news. 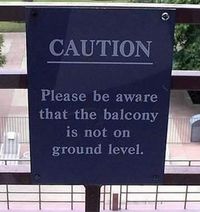 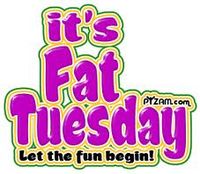