[1) It is FRIDAY, FEBRUARY 1. This is a jockey's favorite month, because it's the shortest. God that was awful! 2) In The Previous Blogpost (ITPB): A-Rod/Ray Lewis accusations, Smirk Wednesday, Cats slipping. 3) Join us on Twitter @gregcote]

Super Bowl predix: Upset! Ravens, 24-21: The favored 49ers might have an overall talent edge, but Ray Lewis gives the Ravens an emotional/intangible advantage, which often is big in a Super Bowl. Also think Joe Flacco has the vertical passing game to penetrate San Fran's D. Click on Super Bowl Gem for the full prediction capsule.

MARINO LOVE-CHILD A SCANDAL, BUT FORGIVENESS TRUMPS SCORN: I have my say in my newest column today; click Marino Deserves Forgiveness to read. Do you agree? Vote in our poll below and say why you feel as you do. Original post from yesterday: Dan Marino, maybe the biggest sports figure in South Florida history, has been exposed by the New York Post for having fathered a love-child in 2005 and paid 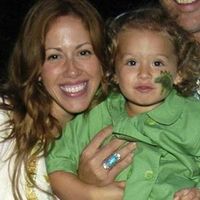 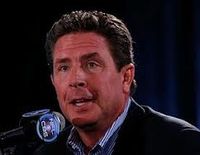 millions to the mother to support the child and to keep quiet. She evidently did not keep quiet. Full story here. Marino, a CBS analyst since 2003 who is to be involved with Sunday's Super Bowl broadcast, apparently had an affair with a CBS production assistant, Donna Savattere, then 35, that resulted in the birth of daughter Chloe. The mother and daughter are pictured. The news broke on Marino's 28th wedding anniversary to Claire; they have six children including two adopted daughters. Marino, when confronted with the news, owned up to it, saying, "This is a personal and private matter. I take full responsibility both personally and financially for my actions." Now, my take: Marino is enough a public figure to make this newsworthy, but I feel bad for Dan, for Claire and their family. He made a mistake eight years ago. He's human. This does not change his standing as one of the NFL's all-time great quarterbacks or as a Miami icon. Neither does this erase any of the good works he has done in the community in raising funds for great causes; I don't know of any athlete we have had who's done more. Some will think less of Marino and that is their right. He has paid millions in this matter, and now he is paying far more, with his embarrassment and with the tarnish on his name. How if at all does this matter affect your opinion of Marino? Vote and say why.

Smirk Friday: Super Bowl With a Smirk, here to tweak the self-imortant NFL and gravitas of its big game, is back today to refute speculation that Beyonce lip-synched replies to questions at her Halftime Show Press Conference. We have details on that, plus Ali, overweight cheerleaders, bowling, Tazon Latino, puppies, football laces and, as always, much more. Click on Smirk Friday for the full column.

LEBRON JAMES UPSET HE'LL MISS SUPER BOWL: The Heat play at Toronto Sunday and will miss most if not all of the Super Bowl because the team will be en route back to Miami on a private jet with no Wi-Fi or satellite TV. "How disgusting is that!?" James said. LeBron, a huge football and Cowboys fan, said, "If the Cowboys were in the Super Bowl I'd stay there for the game."

THE LANCE EFFECT: A-ROD, LEWIS DENIALS HARDER TOP ACCEPT: Lance Armstrong has made it harder for us to believe athletes when they say "I didn't do it," as Alex Rodriguez (Biogenesis) and Ray Lewis (deer-antler extract) have this week. I explore that here: Click on The Lance Effect for the full column.

Posted by Greg Cote at 9:30 AM in Baseball, Dolphins, Heat, NFL, Polls, Scandal, Super Bowl With a Smirk | Permalink | Comments