1) It's SATURDAY, JULY 31. Farewell, July. See you next year. 2) I was back in-studio Tuesday with the Le Batard Show. Check out that day's podcasts for lots of me including a new Back In My Day. 3) Join me on Twitter, Instagram and Facebook. And follow the Greg Cote Show podcast separately on Twitter, Instagram and now on TikTok, too! 4) In The Previous Blogpost (ITPB): Hot Button Top 10, new Greg Cote Show podcast & more.

GREG COTE SHOW PODCAST: NEW EPISODE WITH 'TED LASSO' CREATOR OUT NOW!: Our new 29th episode of 2021 and 71st overall is out now! A new pod drops every Monday at 7 a.m. ET on Apple, Spotify, Google, Amazon, Stitcher, Megaphone, iHeart -- wherever you pod, and of course at MiamiHerald.com. You can find all 71 we've done so far HERE, for free. In our newest episode: Bill Lawrence (pictured), the creative force behind 'Ted Lasso,' joins us to discuss the hit AppleTV+ show whose season 2 is now streaming. Greg has a special request of Bill. Hear his response in a fun, wide-ranging conversation. Also in the new ep: Greg shares a Don Shula story; we discuss the origin of the phrase “shooting the sh--”; the amusement park-like slide at the Dolphins’ new $135 million training facility; the strangest Summer Olympics that ever were; NFL continuing to put the hammer down on unvaccinated players; a two-part live report by Greg and Chris from the recent 5-0 home loss by sad Inter Miami; and a new Mount Gregmore. Thanks as always for the support, pod family. Please listen, rate, review and follow! (Our pod simulcasts on Sirius XM, too, every Monday 5-6 p.m. ET on Channel 145). 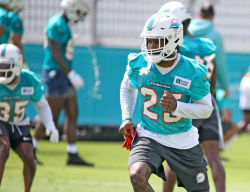 XAVIEN HOWARD IS RIGHT TO FEEL DISREPECTED, AND DOLPHINS NEED TO FIX THIS MESS: Many questions in sports might be argued because they are not always easy to answer. Who to draft? When to make a coaching change? Is he a Hall of Famer? What free agent to pursue? How good will Tua Tagovailoa turn out to be? Then there are other questions that should not be questions at all because they are not debatable. Such as: What should the Miami Dolphins do about the mess they have made with star cornerback Xavien Howard? Well, duh. PAY THE MAN! Player empowerment is sweeping sports. Now NFL players are seeing what started in the NBA, with influential stars exercising their leverage to get out of contracts, to get more money, to get to a new team. Howard, the player coaches and teammates call “X,” wants his share. No, demands his share. He deserves that, and his employer should see that. Instead Dolphins management, which has done a lot right the past couple of years, has fumbled this one. For our full latest column, visit Xavien Howard Right To Feel Disrespected, And Dolphins Need To Fix This Mess.

NOT EVEN ON GOLD MEDAL STAND HAS SIMONE BILES EVER STOOD TALLER THAN NOW: The most stunning disappointment of the Tokyo Olympics is Simone Biles. Yet not even on a gold medal stand has she ever stood taller, or been a better role model. There is bravery in admitting anxiety, inner turmoil, the things no one else can see. There is bravery in admitting human frailty when the rest of the world looks at you and expects only strength, perfect landings, perfect endings. When the very ethos of sports has always been to run through proverbial brick walls, play with pain, tough it out. How long overdue is the dawning new reality: That athletes are not bulletproof. That they hurt like the rest of us beyond the injuries and physical pain that make the headlines. That there is nothing wrong and everything right about someone prioritizing their mental well-being, whether that someone works slinging fries or going for gold. For every young girl Biles has inspired to pursue Olympic greatness, there are an equal number or more who will now take heart that they have a new champion in their own struggles with mental health. For our full recent column, visit Biles' Withdrawal For Mental-Health Reasons Merits Empathy, Not Scorn. 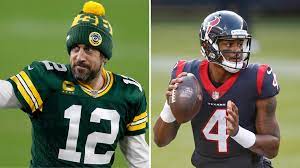 TOP 10 NFL STORYLINES AS TRAINING CAMPS OPEN! (WHERE'S TUA?): Not counting the perpetual question of whether Tom Brady will ever start acting his age, here are our top 10 intriguing NFL story lines as the season unfurls this week with the opening of training camps: 1. Aaron Rodgers: This has been ncharted turmoil: The NFL’s reigning MVP might sit out the season, might abruptly retire to host “Jeopardy!,” might get his wish and be traded in a blockbuster deal, or might even reluctantly agree to player one more season in Green Bay. It began to seem like the latter, with NFL Network insider Ian Rapoport reporting Monday afternoon: “Rodgers has indicated to people close to him that he does plan to play for the Packers this season,” but then softening that a bit with, “That is the expectation.” After boycotting the Packers’ mandatory June minicamp for the first time, it appeared the impasse would continue into training camp and the team’s first scheduled practice Wednesday. Rodgers had wanted out ever since Green Bay traded up to draft his replacement (Jordan Love) in 2020 without the courtesy of telling him — among other perceived slights and disrespect. The club’s olive branch was to make him the highest-paid player in the game. He turned it down, at least initially. (Rodgers and the No. 2 on our list are pictured). To read our full recent column with the rest of our top 10 storylines -- two directly involve the Dolphins -- visit Top 10 NFL Storylines Entering Training Camp (Where's Tua?).

Other most recent columns: Where Dolphins Rank Among Teams With Longest Championship Droughts / Dolphins Owner Ross Unveils New $135 Million Training Site As Another Reason Team Must Win Now / It's Selfish, Me-First Athletes Who Are Refusing the COVID Vaccine / Hot Seat Scale: Ranking Miami's Biggest Coaches By Most to Least Job Security / Peril vs. Possibility: Should the Heat Gamble and Try to Fix Ben Simmons? / Tokyo Olympics Should Be Delayed Again But It's Too Late. Why? Money / May Sha'Carri Richardson Be Last Victim Of Olympics' Archaic Marijuana Rules / 'I'm D'Eriq King For College Hunks Hauling Junk!' It's Strange New World in College Sports / Time For Sports To Quit Hiding, Stand Up And Lead The Pro-Vaccine Fight / and Nassib Coming Out As Gay NFL Player A Milestone In Sports History.

Select other recent columns: Exhibition Losses Give Team USA Wakeup Call It Needs Headed to Olympics / Injury-Wrecked Playoffs, Asterisk Champion: Why Greedy NBA Is Getting What It Deserves / Better 2 Years Late Than Never, Panthers Get 2023 NHL All-Star Weekend / Fate Snatched Basketball From Chris Bosh. His new Book Is Part of His Journey Of Healing / Here's What Else Must Go Right (Besides Tua) For Dolphins To Continue Momentum / Rumors, Speculation and the Truth on Spoelstra, Lillard and Heat / Wanted: A 'Next Big Thing' In Men's Tennis, Golf / Where's Tua? Ranking Our Top 15 South Florida Pro Athletes 25 And Younger / As Teams Like Miami Pray For Right QB, Packers' Disrespect Of Rodgers Is Galling / Messi-to-Miami Is Shot of Hope David Beckham's Troubled Soccer Club Needs / Miami Heat, With No Answers, Put Out of Misery In Game 4 Loss To Milwaukee / Another Early Panthers Playoff Exit Ends An Encouraging Season Too Soon / Pythons, Peppers, Pirate Flag Raised. Inside Le Batard's 24-Hour Triumph / The Curious, Complicated Drama Of Naomi Osaka's French Open Withdrawal / Hall of Fame Snubbed Chris Bosh Last year. Time To Make it Right / Aging Ex-Dolphins Reflect On Own Mortality One Year After Shula's Death / Aaron Rodgers' Packers Drama Involves Miami (Of Course). But Here's Why It Won't Happen / Grade-A Draft Feeds Momentum For Team-On-the-Rise Dolphins /  Le Batard Bet On Himself And His Audience -- And Won Big / Justice For George Floyd Helps Heal Our Shaken Faith, But Fight For Equality Goes On / What Would Jackie Robinson Think About Race In America Today? /  It Won't Fix the World, But Matsuyama's Masters Win Lifts Japan In Time Of Anti-Asian Hate / Talk Of U.S. Olympic Boycott A Reminder Sports, Politics Are Entwined -- And That's Good / How And Why the Miami Heat Landing Kawhi Leonard This Summer Could Happen / Even After Playoffs In '20, Marlins Still 'Bottom Feeders' Fighting For Respect / Special Opening Day as Marlins Welcome Back Fans, Feeling Of Hope / In History And In Hearts, Howard Schnellenberger Will Matter For All Time / Beckham Keeps Name-Dropping Messi, Ronaldo For Inter Miami. Can He Deliver? / Women Keep Accusing Deshaun Watson of Sexual Misconduct. But Will It Matter to NFL Teams? / Phil Reflects on 25-Year Rivalry/Friendship With Tiger As Honda Classic Tees Off / Reality, Loss, Comeback: How Sports Has Been Guiding Light In America's Awful Past Year / Heat Should Parts Ways With Meyers Leonard Over Anti-Semitic Slur / Beckham's Resolve Tested By Tumult As Inter Miami Nears 2nd MLS Season / Time-Travelling To 1960s And Childhood, When The Baseball Card Was King / Quit Lecturing LeBron On Activism And His Own Conscience / Michael Jordan, Pitbull Signal Needed New Era as NASCAR Returns to Homestead / Doesn't Matter If Tiger Woods Never Wins Again. We Are Lucky He's Alive / Loss at Aussie Open Leaves Serena's Legacy Firm Yet Still Unfinished /  Inter Miami's Beckham Risks Stepping Into Massive, Avoidable Mess / Put Brady In Sports' All-Time Pantheon. But He Has Company / Final Herald NFL 2020 QB Rankings / Marlins Hit History-Making Home Run With Kim NG Hire As GM / In a Pandemic-Battered Season For FIU, Butch Davis' Love Of Coaching Survives / Don Shula, 1930-2020, R.I.P. / and What Shula Meant to a Father & Son. The Boy Was Me.