Our Dolphins-Lions gameblog and postgame thoughts are immediately below the new DSM poll.

(That's the season best mark following a defeat). The DSM, in its seventh season, is a continuous weekly gauge of how fans are feeling about the Dolphins and their direction. Right after each game I invite you to share your overall degree of satisfaction. Criteria for voting is your own, but I suggest fans consider the most recent game's performance and caliber of opponent, season as a whole, direction the club is heading and your overall degree of optimism -- all in the context of reasonable expectations. Results are certified official the morning after one full day of voting. In this case that was around 9 a.m. today/Tuesday.

G9: DOLPHINS @ DETROIT: FAILING TO BRING THE MIAMI SOUND TO MOTOWN: Final: Three-game winning streak ends as Dolphins fall to 5-4 and see playoff shot take a hit, a defeat compounded by left tackle Branden Albert's season-ending knee injury. Heartbreak loss as Miami fought from an early 10-0 deficit to take a late lead before giving it up with 29 seconds left. Bottom line? Miami got beat on pass defense as Matthew Stafford threw for 288 yards and Calvin Johnson and Golden Tate both topped 100 yards receiving. Miami also got beat for its red-zone shortco ing, as with settling for three in the fourth quarter from a 1st-and-goal situation. That gave Miami a 16-13 lead but it turned out to be the losing field goal. A hard-fought game by Dolphins, not a shameful loss by any means. But a hurtful loss nonetheless. ..... Fourth quarter: Sure would be nice to have that one timeout Miami used on defense. ... Theo Riddick 11-yard TD pass from Stafford with 29 seconds left. Good coverage by Reshad Jones, but not good enough. ... Miami gets final timeout back after Philbin argues he never called it. ... Fins back up 16-13 on 20-yard kick after Charles Clay drops TD pass in the e-zone. ... DET knots it 13-13 early in fourth on 5-yard kick. ..... Third quarter: Dolphins' first lead at 13-10 as Tannehill-Wallace 3-yard TD pass immediately followed a long Dion Jordan block-field goal return to the 3. Earl Mitchell had the block. ... MIA within 10-6 on 50-yard FG. Lions momentum has been negated. It's a game again. ... Ugh. Dabiel Thomas loses fumble on first possession. ..... Halftime: It's the defensive struggle we thought it would be. Miami has only 103 total yards and must find a qay to spark the offense. Imbalance in the Fins attack so far, with Tannehill at 20 pass attempts and the team only 10-for-18 rushing. Have the conceded the run? We'll see. Miami gets kick to start second half. Feels like Dolphins lucky to be only down by a touch. ..... Second quarter: Miami within 10-3 on 23-yard FG just before half. ... Oy! LT Branden Albert leaves game injured. ... Grimes interception gets it right back for Miami! ... Tannehill intercepted; his own tackle prevents pick-6. ... Tannehill overthrows Wallace on a deep ball ... Lions try another fake punt -- ballsy! -- but Miami stops it. ... Miami's luck so far: Fake punt is sucessful but penalty negates the first down. Penalties hurting. ..... First quarter: Fins O-line is being overwhelmed. ... DET 10-0 on 49-yard Calvin "Megatron" Johnson catch over much-smaller Brent Grimes. Gorgeous deep pass by Matthew Stafford. ... Quick punt for Miami. Ndamukong Suh having his way with Fins OL. ... Koa Misi defensive stop has Detroit settling for short FG and 3-0 lead on drive extended by successful fake punt. Thought Miami defense played well even though Lions controlled ball for 15 plays. ..... Original post: Eliminate Dolfans and Lions fans, extract the partisanship and remove the betting/fantasy factor. This would still be a game that football fans

should want to watch as the second half of the NFL season kicks off. It weighs in both conference's playoff chase. It involves two of the best defenses in the league. And it matches an improving Dolphins offense -- Miami has averaged 30.6 points since Week 4 -- and a Detroit squad getting top weapon Calvin Johnson back. This will be a huge test for Miami's pass defense especially because, apart from the Megatron factor, Golden Tate has been a handful. Should be fun to watch. I'm not convinced the Lions are better than just pretty good. Last time I watched them they were really lucky to beat awful Atlanta by a point in London. Also, erratic Matthew Stafford usually is a decent bet for a pick or two, and I think the Fins' pass rush will bother him. Detroit is favored here by 3, meaning oddsmakers see it dead-even apart from the home-field factor. My pick: Dolphins, 23-20.

Georgia RB Gurley to Dolphins?: NFLDraftScout.com has its 2015 mock draft out, estimates Miami picking 21st, and has the Dolphins selecting Georgia running back Todd Gurley. Click here for the full first-round guesstimates.

THE LIST: BEST DOLPHINS GAMES VS. DETROIT: This is only 11th all-time meeting between the clubs; Miami leads 7-3. Dolphins have faced only the Giants fewer times (7) among franchises that have been around as long. Most indivdiual passing, rushing and receiving yards by a Dolphin vs. the Lions:

Poll result: Heat fans are rooting against LeBron: We asked in the previous blogpost, and "rooting against" beat "rooting for" by a nearly 4-1 margin, 58.6 percent to 15.2.0%. The other 26.2% answered that they are "pretty much ignoring" LeBron this season.

HOT BUTTON NOV. 9: TOP 10 THINGS SOUTH FLORIDA SPORTS FANS ARE TALKING ABOUT: Our blog-exclusive Sunday feature, an expanded, updated Hot Button Top 10. Hot Button means what's on our minds as the sports week just past pivots to the week ahead:

3. Heat: Miami, LeBron both win: Heat won last night to improve to 4-2, and LeBron's Cavs also won their last game to go to 2-3. Take a picture of the standings. Might not be much longer that Miami has the better record.

4. College basketball: Canes open season on Friday at home: NCAA hoops tips off in five days, with Jim Larranaga's Hurricanes men hosting Howard after Katie Meier's women face Oakland. Both UM teams are judged mid-pack in the ACC, suggesting March Madness may be closer to March Mildness in the 305.

5. NASCAR: One week until season crescendo at Homestead: Today in Phoenix determines the final four drivers eligible for NASCAR's season title next Sundday at Homestead. Winner will be whichever driver has fastest car, or the most luck avoiding the vindictive non-qualifiers hell-bent on running the finalists into a wall.

6. Alex Rodriguez: A-Rod's latest shame: It was reported The Yankees' fading star, under oath, admitted all about his PED use to DEA agents, while still continuing to publicly deny all wrongdoing. We thought he was cheat. Turned out he was a cheat, and a lliar.

7. Stephen Ross: Dolphins owner puts business over football: Ross agreed to have Miami play a "home game" against the division rival Jets in London next year, denying the team one of eight home games, and cheating Dolfans of the joy of booing their most hated rival.

8. Marlins: Club begins contract talks with Stanton: Giancarlo Stanton, who finds out Thursday if he is the NL MVP, has begun talks with club about possibly re-signing long-term. Hope Jeffrey Loria isn't involved. Writing a check with that many commas must make him nauseous.

9. Panthers: Hockey team loses, but at least finds the net: Florida lost 6-4 last night to the Calgary Flames. The good news? Cats topped two goals for only the second time all season.

[1) It is FRIDAY, JANUARY 18. Brand new blogpost coming later this morning. A journalism professor once told me "brand new" was redundant. She may be right. I ignore her anyway. 2) Season debut of American Idol last night was more palatable than I'd imagined. Nicki Minaj adds something. Plus, credibility points for bouncing the one-legged guy. 3) Join us on Twitter @gregcote]

WHAT TO MAKE OF THE INCREDIBLE MANTI TE'O STORY: Yes, and Touchdown Jesus wept. Again. It isn't bad enough Notre Dame got schooled by Nick Saban's Alabama in the BCS National Championship that 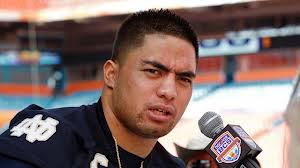 Miami hosted. Now its signature player, linebacker and Heisman runnerup Manti Te'o, is exposed as, well ... as what? He would be a liar of Lance-esque proportion (only much more creative) if we believe the Deadspin piece (here) that reported Manti completely made up the non-existent girlfriend who supposedly died of leukemia in November. Or ... Manti could be the victim of a heartless prank, as Notre Dame and Te'o now claim. Liar or victim. In this case there doesn't seem much gray area. Liar or victim? For the record, I lean to thinking Te'o contrived the whole tale, but am not sure. I invite you to vote and share your own thoughts.

When I was the victim of a (much smaller) hoax: Media outlets all over the country including this one were victims of the Manti Te'o/dead-girlfriend story, reporting it as fact. I sympathize. As a young

reporter in 1982 I wrote what I thought was a nice, timely little story about how Fort Lauderdale Strikers soccer player Ken Fogarty (pictured) was worried because his sister was on a British military vessel headed to the Falklands War. Turned out Fogarty, a prankster, made the whole thing up. A certain trust is in play when media and subjects intersect. Should somebody have asked Te'o to see his girlfriend's death certificate? Should I have called the Royal Navy to confirm Fogarty's story? Maybe yes on both. But only in the clarity of retrospect. 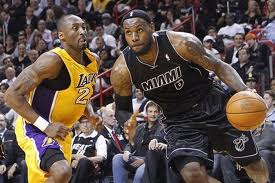 LEBRON'S 39 LIFTS HEAT PAST LAKERS: LeBron's 39 points and Dwyane Wade's 27 powered Heat over Lakers in L.A., 99-90, late last night. Impressive win, and big show by the Big 2 after each was named an all-star starter earlier in the day. The result reignited the hope in Miami fans that, yes, there is a switch that this team is able to find, and flip. Original post: The Heat crushed Golden State last night as LeBron James breezed past 20,000 career points younger than anyone else. Now, tonight, it's Heat at Lakers and, yes, for this one I will stay up 'til 1 a.m. Lakers have won a couple in a row but still struggle off playoff pace. Miami is only 9-9 on the road. No matter. This is still a marquee, statement, event game, a stage on which both teams will want to bring the A-game and really perform. Can't wait!

[Update: Remember last week when LeBron bragged that the pressure on the Lakers is "nowhere near what we went through"? Kobe Bryant today was asked about that. His response: "What does he want, a cookie?"]

UM HOOPS' NICE RUN, HUGE TEST: The nice run: A 13-3 record, five wins in a row and a pristine 4-0 ACC mark for Jim Larranaga's men. I'm-a start to float conspiracy theories if the Canes are still not ranked in the next poll. The huge test: This coming Wednesday, UM hosts No. 3 Duke. We'll be a college basketball hotbed ... at least for the night.

ANTICLIMACTICALLY INTO THE CONFESSIONAL WITH LANCE ARMSTRONG: Last night was the much-hyped interview with Oprah Winfrey in which shamed cyclist Lance Armstrong came clean about his PED use after years of indignant denials. "One big lie," he admitted. (I imagined the interview would star Oprah with an occasional appearance by Lance). It was the interview we already knew so much about there was almost no need to watch. It was on the network we have never seen and have no idea how to find.

Poll result: Support for Dolphins' stadium plan, but not strong: We asked in the previous blogpost if you supported the Dolphins' plan for a $400 million stadium improvement that would be shared equally by owner Stephen Ross and tax dollars. Yes won with 57.4 percent. Yes-but-only-if-Ross-pays had 35.6%. Only 5.1% thought the stadium was fine as is, and 1.9% were undecided.

THINGS GREG COTE PONDERS BUT SELDOM TALKS ABOUT (one in a series): With no evident protest or uproar, the classic 100-watt light bulb evidently is being phased out. Publix now maxes out at 75 watts. Updates as warranted.

Click back. Will be updating/adding more to this latest blogpost...