How much faith do you have in the people running the Dolphins? (with poll); plus UM women's hoops, Heat, Kirby Hocutt, Lost & Found (Ken Fogarty) & more 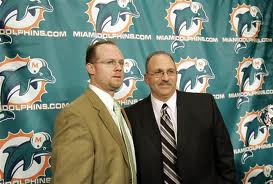 HOW MUCH FAITH IN THIS DOLPHINS' REGIME?: I explore, in a new column you'd find online now, in Friday's pulp edition or by clicking HERE, the many questions and doubts dogging the Dolphins as free agency and the NFL Draft approach. Should they sign Jeremy Shockey? What will they do for a QB? Who should they draft in the first round? I also explore the many reasons why Dolphins fans might be apprehensive right now. Because, of all the questions facing this unsettled team, the biggest question is this: Do the men running it -- GM Jeff Ireland and coach Tony Sparano (pictured) -- have the right answers? Take a dip in our poll. How much do you trust the Dolphins' leadership as the 2011 offseason heats up? 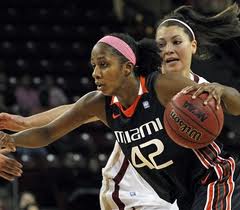 at Miami's Hurricanes -- won by the Canes, 84-68 -- and I make that claim because this feels like it could be the most special season in UM's 39 years of women's hoops. Certainly it was this market's most significant women's game in the sport since the June 1, 2000 debut of the WNBA's short-lived Miami Sol. The Seminoles were AP-ranked No. 14 and the Canes No. 12, and victorious UM is now thinking top-10 and ACC championship. Miami has a chance to better its best ranking ever (No. 6 in 1992) and is certain to make the women's NCAA Tournament for the first time since 2004. Full credit to coach Katie Meier and an entertaining team led by super-guards Riquna Williams and Shenise Johnson. If Miami stays hot, Johnson (pictured), who scored 25 points tonight, should be a national Player of the Year factor. More intrigue for tonight: FSU had been a nemesis, on a 15-2 series run coming in, but UM instead improved to 20-0 at home. You know how mighty oaks grow from acorns unless a deranged Alabama fan comes along and poisons the tree? Well, mighty programs grow from games like tonight's. The under-supported Canes had a chance to significantly build their following, and seized it. This was a huge game, but an even bigger opportunity.

ON KIRBY HOCUTT: The Miami Hurricanes' bright young athletic director, Kirby Hocutt, 38, is leaving for Texas Tech after being offered that job and accepting. He has only been at UM three years. Hmm. So, umm, when he said this was his dream job and talked about "The U" and family and all that ... was he just joshing? Guess we found out. 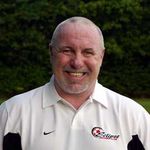 LOST & FOUND: KEN FOGARTY: [This debuts an occasional blog feature in which we give you a brief where-are-they-now on various South Florida sports figures from the past]. Ken Fogarty was a stout bulldog-of-a-British defender who played for the NASL's Fort Lauderdale Strikers in 1979-83, when the team enjoyed a thriving niche following and drew crowds of better than 10,000 to Lockhart Stadium. He appeared in 101 games, fourth-most in club history. Ken is pictured in action back in the day (No. 7) and more recently. Today, at 56, he is technical director for the Texans Soccer Club, a premier-level youth program in Houston. "Coming to this country was the best thing to ever happen to me," Ken told us today. "I came from a dour, fourth-division style of play. In England it was black and white and in Fort Lauderdale, color. What a fabulous experience for me."

CELL-PHONE DRIVERS STINK: I have seen those "Shut Up And Drive" bumper stickers (and variations, as pictured) but never found the cause all that compelling, until yesterday, when a 31-year-old woman on a cell phone -- with a baby in a car seat -- plowed hard into the back of my 19-year-old son's car when he was stopped at a red light. He's OK. I'm angry. Not sure if she was texting or talking, but, either way, I am coming around to the idea that driving while using a cell phone isn't much different than DUI in terms of the potential hazard. I have observed, by the way, that women seem by far more likely to be the ones with wheel in one hand and phone in the other. C'mon, ladies. I know y'all are harried and juggling and multi-tasking and all that, but if you don't think driving deserves your undivided attention, well, call a @#%&ing cab!

Click back. Will be adding more stuff to this new blogpost later...

Our new Lost & Found series features occasional columns catching you up with former prominent South Florida sports personalities who have fallen from the headlines.

(By the way, because a few e-mailers have asked: The recipient of Mira's "MIRAcle" pass was Nick Spinelli. And the Gator defender who forced Mira's hand was fellow Key Wester Sam Holland, now a Miami attorney).

Have in mind a suggested subject for a future Lost & Found episode? Drop a name below or to gcote@miamiherald.com.