1) It's SATURDAY, MARCH 14. Coronoavirus threat, sure. But at least we all survived Friday the 13th -- even you paraskevidekatriaphobes. 2) A new Back In My Day video (Flavored Coffee!) premiered Tuesday on the Le Batard Show on ESPN Radio. Watch the video here: pic.twitter.com/jEeboy2jSR. 3) In The Previous Blogpost (ITPB): Hot Button Top 10, Premiere Week for new Greg Cote podcast & more. 4) Join us on Twitter.com/gregcote. Also on Facebook and Instagram.

GREG COTE SHOW PODCAST EPISODE 2 NOW OUT!: Our new Miami Herald podcast, "The Greg Cote Show With Greg Cote," premiered last Monday and is out with Episode 2 now! You can find it by searching 'Greg Cote Show' on Apple, Spotify, Stitcher or wherever you do your podding. Or find it directly right here. Please listen and subscribe! Subscribing is totally free and so important to what we're doing in this new project. Our podcast is a variety show, sports and non-sports, 3-0-5 and national, fun and (when absolutely necessary) serious. Check out Episode 2 now! (Episode 3 drops Monday morning).

MAJOR MIAMI SPORTS EVENTS ENGULFED BY GROWING CORONAVIRUS SCANDAL. NEW COLUMN--UPDATED!: Sports is at the mercy of the spreading coronavirus outbreak, with leagues unsure what to do about the growing threat, and fans in a state of abeyance. Elsewhere games and sporting events have

been canceled or postponed, or played to empty houses — no fans allowed. Just this week the NBA suspended its season until further notice and the NCAA Tournament said games would be played in empty stadiums, after the NBA, MLB, NHL and Major League Soccer jointly announced that media members would be denied access to team lockerrooms as a precaution against the spread of a virus that can be deadly. Teams have instructed baseball players to not sign autographs. The Ivy League basketball tournament was canceled. All sports in Italy are on hold until April 3 at the earliest. Wednesday’s Champions League soccer match in Paris was played with no fans in attendance. The start of Japan’s baseball season was delayed. Ohio’s governor recommends no fans be allowed at indoor events. Will next month’s NFL Draft in Las Vegas become a closed event with no fans allowed? In South Florida the NBA suspension has stopped all Heat games for now, the NHL suspension has stopped all Panthers games for now, the Miami Open tennis tournament was canceled, the MLS suspended its season and thus that of new team Inter Miami, and it was announced NASCAR's upcoming Homestead race would be run with no spectators. Now MLB has canceled the rest of spring training. All this comes at a time of year the sports calendar had been especially packed with major events anticipating big crowds. Still on, at least for now, as teams, leagues, government and health officials grapple with how to best deal with a threat that already has essentially closed the entire country of Italy and is ow officially a pandemic: The Marlins’ Opening Day on March 26 and the Florida Derby on March 28. Stay tuned. My latest column is updated with the latest developments. To read in full, WITH NO PAYWALL, please visit Miami Sports Now Utterly Engulfed By Coronavirus Threat -- But Precaution Is Justified. 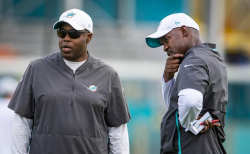 WITH MONEY AND PICKS GALORE, PRESSURE ON DOLPHINS GM GRIER TO WIN NEXT 6 WEEKS: For the Miami Dolphins the next six weeks will shape a forlorn franchise’s immediate and long-term future. But the coming free agency period and NFL Draft will not be about any one player as much as it will be an overall referendum on general manager Chris Grier, the man out front in roster decisions. (He is pictured with coach Brian Flores). This begins Grier's fifth season as GM and third with say over personnel, and he begins the biggest month-plus of his professional life. It will dramatically and quickly turn the Dolphins competitive, or be a seismic disappointment. The question: Are Grier and his braintrust including owner Stephen Ross and coach Brian Flores -- up to the challenge. Miami has hit the lottery in terms of available spending money and draft picks. That means Grier and Co. have every opportunity and no excuse to fail. For our full recent column, please visit It's Dominate Or Bust For Dolphins GM Grier Over Next 6 Weeks.

Other most recent columns: Repentant Cheater A-Rod Slams Astros With Lesson On How to Handle Their Own Scandal / Inter Miami Is Market's Sleeping Giant As Home Opener Nears and As NFL Free Agency & Draft Near, All You Need To Know About Dolphins' QB Situation. Also: Beckham, Inter Miami Survive To Finally Reach Opening Week / Jeter Arrives At Camp, Calls Marlins 'Layered With Talent' / Dwyane Wade, His Transgender Daughter And A Lesson In Love / Why Marlins Aren't Pursuing Puig All About Change In Ownership and Pressure On Marlins for Big Improvement Now -- and It's About Time.

'ORDINARY MAN': NEW OZZY VIDEO: I've talked up this song before. Here's the new, official video for it:

Posted by Greg Cote at 12:20 PM in Back In My Day, Dolphins, Health, Music, The Greg Cote Show podcast, Videos | Permalink | Comments