Note to the blogdom: It's Memorial Day in America. Be thankful for somebody. We'll be back with a brand new blogpost Tuesday morning.

[Phillip Merling's arrest: (Click on Nowhere To Hide for today's column by me on Merling's arrest). Dolphins young defensive end arrested early Thursday morning for aggravated battery in a domestic dispute involving his pregnant girlfriend. The is the fourth Dolphin arrest this offseason, following the DUI busts of Will Allen and Ronnie Brown and Tony McDaniels' domestic battery. Merling was a high 2nd-round pick in 2008 but has disappointed on the field as well -- one big reason the club drafted Jared Odrick to fill a similar role. Dear Phillip: Have you always been an idiot, or is this a trait you developed over time? More Dolphin news: Team just cut Reggie Torbor].

[Jarvis Williams, R.I.P.: Condolences to the loved ones and friends of Williams, the former Dolphins safety (1988-93) who passed away unexpectedly at age 45 in Palatka, Fla., of an acute asthma attack. I covered Jarvis and recall him as a solid safety and nice guy. Williams and the more outgoing Louis Oliver were a formidable safety tandem for a lot of seasons here].

THE MARLINS DON'T DRAW BECAUSE...: ...why? Enlighten me. Tell me, because I don't know. The team is fun to watch. They're pretty good and chasing a playoff spot. They have some star power with guys like Hanley Ramirez and Josh Johnson. They have some blue-collar ethic with guys like Cody Ross and Dan Uggla. They have rising young players. The stadium is centrally located. Yet they come home to open a long homestand last night and the crowd is an embarrassing 11,434. Let's figure out why. Take a dip in our poll and drop a comment of elaboration. Will the new stadium be a panacea? I have my doubts. This poll is for Marlins fans -- those who do and don't go to games. That's why "don't care about baseball" is not one of the poll answers. Vote now!

[Blogpoll note: This one has blasted past 1,000 votes, unsually high for a Marlins-related poll. Thanks. And keep 'em coming!]

DENNIS RODMAN--BOOM!: Spy report. A lawyer friend of mind at a table of five was having a business meeting at Capital Grill in Fort Lauderdale Tuesday night when Dennis Rodman was spotted in the restaurant walking past. On a lark Rodman was hailed and called over. He came over -- quite obviously beside himself with liquor or other influences -- sat, stayed for 15 mostly incoherent minutes and kept saying "Boom!" at the end of every sentence. As in, "You my lawyer? How you get me out of this DUI tonight -- BOOM!" I wouldn't say it if it weren't true. Boom!

BEASLEY A DRAFT-DAY GONER?: ESPN's Chris Sheridan said on Jorge Sedano's 790 the Ticket radio show today he thinks the Heat will trade Michael Beasley on draft-day next month. It sounded like a logical guess by Sheridan more than any inside info. I think it's still soon to give up on Beasley's potential. But if Miami does, I would think the Heat would get a starter-caliber player in return or possibly a low-first-round draft pick. Another possibility would be packaging Beasley in a sign-and-trade to get Amare Stoudemire prior to the onset of free agency.

SUPER BOWL GOES ALL FROZEN TUNDRA: Click on NFL Goes Insane for today's column by me on this. As expected Tuesday the new Giants/Jets stadium in East Rutherford, N.J. was awarded the 2014 Super Bowl, the next one available. Gotham beat out Tampa's bid. The third bidding city, our own Greater Miami (I'm done with "South Florida"), was the first eliminated. I think the NFL was concerned the Dolphins' 746 celebrity part-owners would try to glom too many freebie tickets. Jersey averages 20-some degrees in early February, so we're looking at a frigid, possibly snowbound SB in an open-air stadium. That's brutal, of course. Could make for an interesting or at least bizarre game, visually. Could also make for a miserable SB Week for visiting fans.

"I'M NO. 88!" (UMM, IS THAT GOOD?): An interesting, brand- new website called Sportsgrid.com (check it out) attempts to quantify popularity of athletes, teams and sports media using various criteria. Well lo and behold your faithful columnist/blogger, little ol' Greg Cote, is (when last I checked, anyway) ranked No. 88 nationally in the "Power Grid" among all writers of sports, both online and print. The top five: Peter King, Bill Simmons, Peter Gammons, Joe Posnanski and Dan Patrick. The criteria is a combination of news buzz, blog buzz, Bing searches, print circulation and online unique hits. I think being 88th sort of sucks, but at least it does rank No. 1 in the South Florida market of the seven local writers ranked among 321 nationally. (How's that for putting a positive spin on being 88th!?)

PLAYS ON WORDS GONE WRONG: CBSSports.com weighs in on the first-place Tampa Bay Rays with the headline, "They're gRAYt!" Gawd. When a pun makes even me groan, you know it's awful. 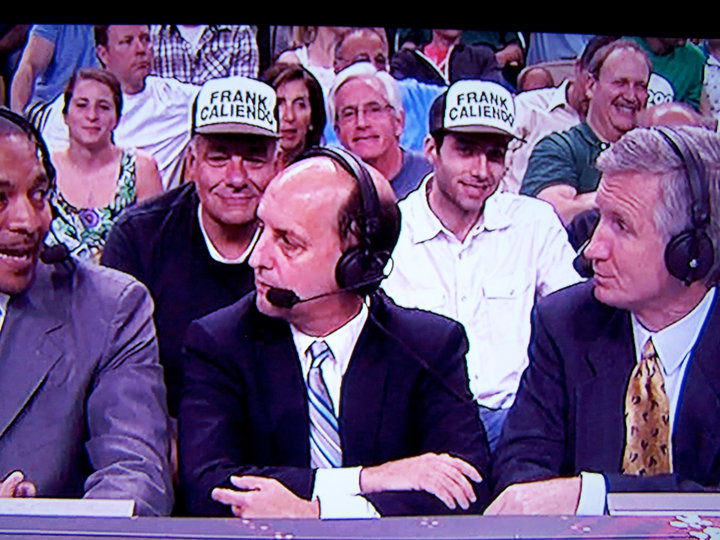 CALIENDO HATS? CALIENTE!: Comedian Frank Caliendo Tweeted that he was as surprised as anyone to see this scene on TV in Game 4 of the Celtics-Lakers series. Hmm. I might be cynical, but I set it at even money that Frank or someone connected to him knows who these two guys are. Caliendo -- whom I recently saw in Vegas, and he was great -- is big enough to have fans who'd do this, but also small enough to go guerrilla like this for some free national pub.

WHAP A PINATA FOR PAC-MAN: Happy birthday to Pac-Man! The all-time greatest arcade video game (IMHO; well, along with offshoot Ms. Pac-man) turned 30 this week. Fast fact: the game's original Japanese name was Puckman, which derived from the Japanese word paku, meaning "chomp." But American arcade operators worried vandals would alter the letter P to appear like an F, so Pac became the safer substitute for Puck. 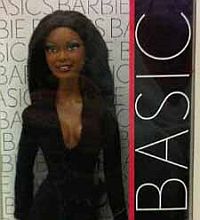 MATTEL ROLLS OUT BUSTY BARBIE: Mattel's Barbie series has a new "Back to Basics" line that features female dolls dressed as if ready to go clubbing (or in some cases ready to stand on a street corner winking at cars). One of them (we'll call her Busty Barbie) is pictured right. I only wish I were making this up.

AMERICAN IDOL VOTERS BLOW IT. BIG TIME: With incredulity I report that American Idol voters tonight awarded the season title to Lee DeWyze over the far-more talented Crystal Bowersox. Not that I'm bitter. In a related story, the series Dancing With the Stars crowned its new celebrity champion and it was ... Nicole Scherzinger! Seriously. She is alleged to be a pop singer whose claim to fame came as part of the group Pussycat Dolls. Nicole Scherzinger. Rule of thumb: Nobody with the last name Scherzinger is allowed to be considered a celebrity. I mean, Bowersox is weird. But  Scherzinger!? C'mon.

THE LIST: MARLINS ATTENDANCE: Florida is averaging about 17,300 per game (15th of 16 NL teams), on pace to draw roughly 1.4 million for the year. Top five attendance totals in club history, in millions:

[Note: The Chris Bosh vs. Amare Stoudmire for Heat poll continues raging in the post directly below this in the blog].