Dolphins' uncommon optimism: The franchise hasn't made the playoffs since 2008 or won in the postseason since 2000 but its latest editon is all fired up and all but guaranteeing the playoffs in '15. Click on Refreshing Bravado for my column off the start of training camp.

HOT BUTTON (AUG. 2): TOP 10 THINGS SOUTH FLORIDA SPORTS FANS ARE TALKING ABOUT: Our blog-exclusive Sunday feature (posted early this week) is part week-in-review, part look-ahead. Hot Button means what's on our minds, locally and nationally, from a Miami perspective, as the sports week just past pivots to the week ahead:

1. DOLPHINS: Playoffs or bust! Big talk as training camp opens: Stephen Ropss, Joe Philbon and Ryan Tannehill, et al, exuded confidence and all but guaranteed the playoffs as Dolphins camp began on Thursday. The bravado was refreshing to hear, but, coming from a team that hasn't won a playoff game in 14 years, it also sounded a little like your girlfriend smack-talking Ronda Rousey.

2. MARLINS: Fernandez goes for home win-streak record Sunday: Jose Fernandez, 15-0 at Marlins Park, takes the mound Sunday vs. Padres trying to equal the MLB record for most consecutive home victories to start one's career. It's also "Bark in the Park" day. Opponents haven't bothered or derailed Jose at home. Let's see if a bunch of yapping dogs can.

3. HURRICANES: UM opens football practice on Thursday: Coach Al Golden begins his fifth year leading The U, but, coming off a 6-7 season, fan patience toward Golden is minimal. To give you an example, I hear disgruntled boosters have arranged for a plane to pull a 'Fire Golden' banner Thursday in gloomy anticipation of a disappointing first practice.

4. NFL: Brady still fighting as Goodell denies Deflategate appeal: Patriots QB Tom Brady remains under a four-game suspension but is taking his case to federal court, which will hear arguments Aug. 12 and 19. So it's official: They truly have made a federal case of whether Brady was aware of infinitesimally under-inflated footballs that had zero bearing on any outcome.

5. MARLINS: Fish are sellers (of course) at trade deadline: A flurry of baseball trades to beat the MLB deadline included Miami trading away five players -- starting pitchers Dan Haren and Mat Latos among them -- and getting all young prospects in return. Deals were expected, and less a fire sale than smart business. Rotation is thin now, though. Have they told you yet? You're starting Tuesday.

7. HOWARD SCHNELLENBERGER: Tribute dinner planned for coaching icon: Miami Touchdown Club is hosting a tribute dinner for Schnellenberger, 81, this Thursday at Signature Grand in Davie. I don't wanna say Howard has had a full career, but if they detailed all of his various accomplishments, I'd estimate that Thursday's dinner would end around early October.

8. JUNIOR SEAU: Controversy overshadows Hall induction in Canton: Pro Football Hall of Fame will induct its latest class this coming Saturday, overshadowed by the Hall's decision to not let the family of the late Junior Seau speak on his behalf. Not sure which is worse. That heartless decision. Or the subsequent refusal to budge from it.

10. CECIL THE LION: Has hunting ever seemed less sporting?: A Minnesota dentist, Walter Palmer, is in trouble for illegally hunting and killing the beloved lion Cecil in Zimbabwe and now faces extradition to face charges. (See more on this below). Authorities aren't buying the dentist's excuse that he was merely trying to sedate the animal to perform a root canal.

Missing the HB10 cut: Dolphin Cam Wake poses with uncaged tiger in Thailand. "That was intimidating," said the tiger. ..... Marlins play farting sounds on PA system during Nationals batting practice because, well, they're the Marlins! ..... Marlins will have influence of over design of David Beckham's new MLS stadium planned near Marlins Park. Uh oh. ..... Two Heat fans spend $75,000 to watch a game with Dan LeBatard. You can have met for 20 bucks. ..... Kyle Busch is first NASCAR driver in eight years to win three races in a row, and we still don't like him. ..... Florida's two-day lobster mini-season ends. Do y'all not realize lobsters are readily available for purchase year round? ..... Beijing is awarded 2022 Winter Olympics despite having no snow. IOC strikes again! ..... Boston withdraws as host candidate for '24 Summer Games, and entire city yawns. ..... Coral Springs' Lexi Thompson, 20 wins her fifth LPGA tournament. When I was 20, I figured out that if you shook a vending machine an extra bag of chips might drop. ..... R.I.P., Rowdy Roddy Piper, wrestling's greatest bad guy.

THE MOST IMPRESSIVE STREAKS IN MIAMI SPORTS HISTORY: I fancy myself a South Florida sports historian so this kind of stuff interests me. Here are my top five Miami streaks, plus a few no-I-didn't-forget-you honorable mentions:

1. Dolphins' 18-game winning streak, 1972-73 -- Four decades later it still is tied for the third-longest streak of all-time in the NFL. But it is our choice for No. 1 because of the historical significance that it included the epic and still-unparalleled 17-0 Perfect Season of '72. Fullback Larry Csonka, along with Don Shula the broken-nosed face of perfection, is pictured.

2. Hurricanes' 58-game home winning streak, 1985-94 -- It remains an NCAA football record, and an emblem of both the UM Glory Years and why the Orange Bowl still is so fondly remembered by so many. That streak also is one of the reasons so much pressure finds Al Golden today. Quarterback Gino Torretta is pictured.

3. Jose Fernandez's 15-0 home record, 2013-current -- Fernandez, pictured, is scheduled to pitch on Sunday here, and one more win would tie the all-time MLB record for most consecutive home victories to start one's career. (A major reason for that streak and just as impressive as the wins: His 1.19 career ERA at Marlins Park).

4. Heat's 27-game winning streak, 2013 -- The Heat's franchise-record winning streak stands as probably the greatest hallmark of the four-year LeBron James Era; well, after the two championships, of course. The streak was the second-longest in NBA history and ended six victories shy of tying the all-time record of 33 set by the 1971-72 Los Angeles Lakers. James (back when Miami still loved him) is pictured.

ON WALTER THE LION KILLER: The story has riveted international attention: How a Minnesota dentist, Walter Palmer, paid $50,000 to hunt and kill and beloved lion named Cecil in Zimbabwe. Now it seems 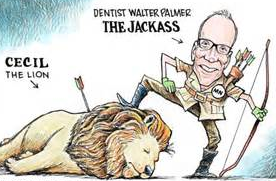 that government is attempting to extradite the doctor to face charges, and I must admit I hope the U.S. cooperates. Two Zimbabwe men already have been arrested. (Click here for the latest). The Zimbabwe Conservation Task Force says Cecil suffered a slow death, first with a crossbow, later by a gun. Palmer has said he regrets what he did, but he still should face consequences beyond, we may presume,the ruination of his dental practice from the tsunami of outraged reaction. The good to come of this: The light shone on the damnable practice of hunting for pleasure -- not for need, not for food, but for the pure sport of it. Hunters are free to do what's legal, but many of the rest of us are free to condemn the practice. What Palmer did, it must be emphasized, was not legal. (The illustration pictured is by Dave Granlund).

Poll result: Most think Brady legacy is damaged: We asked how much weight Tom Brady's role in Deflategate should be given in shaping his ultimate NFL legacy and it was 53.9 percent "a lot," 30.9% "a little" and 15.2% "none."

[Note: Dolphins draft poll still welcoming votes in the post directly below this]. 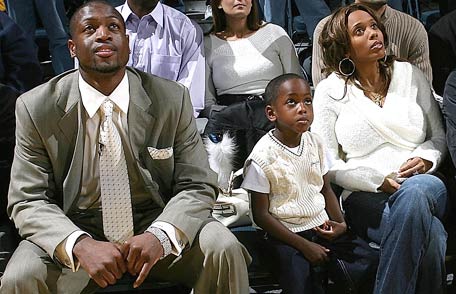 WADE'S PERSONAL NIGHTMARE: In court papers being filed today Heat megastar Dwyane Wade is asking for full custody of his two sons, 8 and 2, alleging that estranged wife Siohvaughn is an unfit parent and saying she needs psychological help. He also is suing her for defamation, and their divorce trial is set for June. Ugly, bitter situation. Pretty remarkable he can set aside the inner and personal turmoil and perform like he does on the court. Every day, a new reminder that athletes are human. They bleed like us. (Granted, they bleed on thousand-dollar silk sheets and have personal valets to clean up the mess. But you get my point). Pictured: Better days.

DEZ BRYANT: Dolphins met with receiver Dez Bryant last night and are to do so again today, an encouraging sign that the team still is seriously considering him with the 12th overall pick in the draft. Remember the Cote Formula, Dolphins: Baggage Plus High-Impact Trumps Perfect Citizen Without High-Impact. 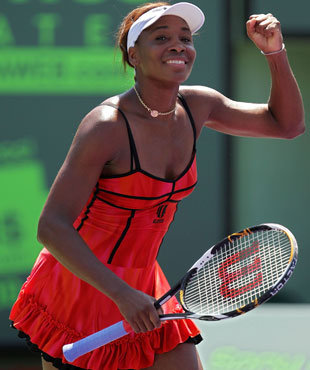 MARINO/RAIDERS 1990 TRADE TALKS: I was surprised to read in another Miami Herald blog a recent post about Dan Marino once almost joining the Raiders. A colleague left the impression the trade possibility was not covered at the time, and seems to invite credit for first reporting it. The colleague wrote, "In the mid to late 1990s when I first wrote it, I took a lot of heat from local sports talk radio..." And: "The story broke in the mid 1990s." Hmm. Huh? I happened to cover the Dolphins fulltime for two years, in 1990-91, so I know better. This possible trade was nearly all I wrote about in March 1990, including a March 23 story in which Marino publicly acknowledged for the first time he'd asked to be traded. (You could look it up!) It was first reported then that the L.A. Raiders were the serious suitor, but that Miami's demands for the then-28-year-old Marino were too high. The Dolphins were demanding one or two first-round draft picks, depending on other considerations, plus one or two young but rising players. Raiders players discussed included running back Bo Jackson, cornerback Terry McDaniel and guard Steve Wisniewski.

ALEX BROWN, ANYONE?: Bears released defensive end Alex Brown today. He is 30, and fairly productive with 43 1/2 sacks in eight seasons including six ast year. Also a play-with-pain guy who had 127 straight starts. Might be someone the Dolphins should consider for the right price. I'm just sayin'.

"I AM KAZAAM" WINS HAIKU CONTEST: I have relegated the March Madness Haiku Challenge winner announcement to this small item in a pique, because the entries were disappointing to me in both number and quality. But standing above the rest was I am Kazaam with: "There is no Cinderella, only step-mothers. Somewhere, Wofford weeps." The alliterative ending nailed it. Congrats, Kazaam. E-mail me your address and once I verify it's you via your IP number we'll agree on a prize.

ANDY RODDICK: Here is my column on Roddick and the state of American tennis from the Sony Ericcson Open. Pictured left is Andy's wife Brooklyn Decker, the swimsuit model. This is one (or perhaps two) of the reasons life is very good for Andy. 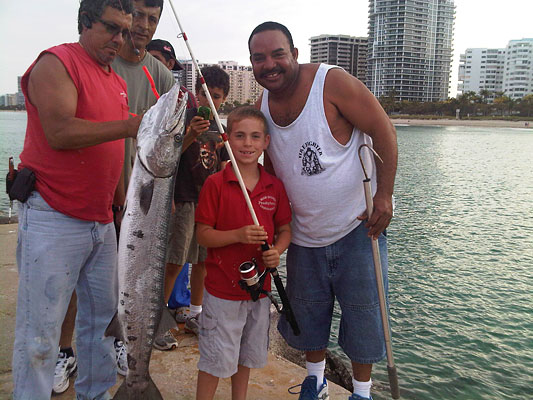 AREA BOY SLAYS GIANT 'CUDA: The young boy in the picture is Jackson Carney, 7, who helped the man at right bring in this large barracuda off the south jetty at Haulover. Jackson is the son of a friend of ours. That is one of the small privileges of bloggery: Throwing in a personal photo on occasion.

RICKY MARTIN: Always suspected he was gay. But then when he revealed he was, I found myself not giving even half a crap.