1) It is SUNDAY, MARCH 1. Happy new month! 2) Our Sunday Random Evidence notes column and our blog-exclusive Hot Button Top 10 are taking today off. 3) Click here to watch a Boston-area man roll the last three strikes in a perfect 900 series in bowling. 4) In The Previous Blogpost (ITPB): ESPN analytics ranking of local teams, get-well-Bosh campaign, Dan Marino, Daytona 500, Oscars review & more. 5) Follow us on Twitter @gregcote. Also on Facebook, Instagram and Vine. 4) Here is the latest 'Back In My Day' segment from the Dan LeBatard Show: Back_in_my_Day-_Baseball's_Rule_Changes-_2-24-15 (2)

"Will the last ESPN on-air personality to not be suspended please turn out the lights?" --Greg Cote

HARTLINE OUT, BEASLEY, JAGR IN. HUH? WHA!?: OK I leave for a long weekend's holiday in Austin, Tex. and all hell breaks loose back in South Florida. Man I can't leave you people alone for a minute! Just since I left early Thursday, the Heat bring back Michael Beasley with a 10-day contract, the Panthers acquire aging star Jaromir Jar, and the Dolphins release receiver Brian Hartline (and also Brandon Gibson). Quick thoughts on each: Heat/Beasley -- Makes sense. With Chris Bosh out the rest of the season and Josh McRoberts out all year, Miami needed power-forward help, and Beasley is still young enough and with enough upside to risk a trial run. Panthers/Jagr -- Well, Jaromir is 43 now. Can he still provide the scoring punch Florida needs to lock down a playoff spot? As when the Marlins signed Ichiro, this signing is exciting for the remaining big-name value but may not have huge impact. Dolphins/Hartline -- It's a clear salary purge to erase a one-time prominent WR of diminishing results. The question now is if eliminating Hartline and Gibson means it'll be more likely that Mike Wallace stays. (I doubt it). Interesting times for all of these teams. And getting more interesting all the time.

WHAT MIAMI TEAM HAS MOST EARNED YOUR OPTIMISM?: Blind hope is one thing, but I'm talking here
about optimism rooted in reason. What is the local Big 5 team most headed the right way? Current or 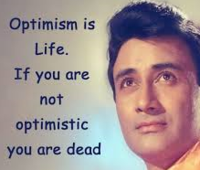 most recent won-lost record should be factored, but maybe not as much as the overall direction -- the sense of how well the team is positioned to win big and soon. This is not asking your favorite team or sport. It's asking who among Dolphins, Heat, UM football, Marlins and Panthers fans should feel the most optimistic right now? Purposely I did not include a "none of them!" option in the poll, because like the guy to the right staring up at you says, if you can't find optimism somewhere, you're dead. This, I know, is a tough poll question that may scare away discourage many potential voters because the answer can't be quantified and because it's hard to compare different sports. Plus, you may think it's a close call between a couple of teams. Nevertheless! You are challenged: Take a dip in our poll and drop a Comment saying why you feel as you do. 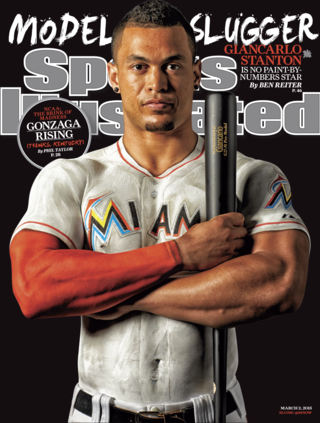 STANTON'S BURGEONING STAR-POWER AFFIRMED ... IN BODY PAINT: Marlins star Giancarlo Stanton adorns the cover of the latest Sports Illustrated, and SI say it's the first time any athlete has been on its cover in body paint. (Um, don't some things go without saying?) This is the latest indication of Stanton's burgeoning journey from local star en route to national superstar. A $325 million contract will start that process, along with the expectation of 40-plus home runs. Being built like somebody sculpted in marble doesn't hurt. And the human interest angle -- coming back from an awful, face-smashing beaning -- just adds another layer.

On Marlins' two top prospects: One you may see soon, the other will take awhile. The Marlins

place righty pitcher Tyler Kolek (ranked No. 34) and catcher J.T. Realmuto (No. 72) among ESPN's Top 100 MLB prospects for 2015. Kolek, who just turned 19, will need a few years to marinate and refine, although he's a 6-6, 270-pound behemoth with a mid-90s fastball and the club thinks he could develop into a top-of-the-rotation starter. Realmuto (pictured) turns 24 in March and has a chance this spring that he's ready to stick with the big club.

BETTING PUBLIC HAS LITTLE FAITH IN TIGER TURNAROUND: It was the opposite once. The wagering

public loved Tiger Woods. Back in his reign, as a major neared, people actually debated if Tiger vs. the field was a decent bet. I remember the conversations. Now? New odds from our friends at Bovada have Tiger winning zero majors this year as a prohibitive 1-7 likelihood, and he's now a 14-1 longshot to surpass Jack Nicklaus' career majors record. The bright side? If you see Tiger with a big comeback left in him, it's a buyer's market.

Check back often because we constantly update and add to our latest blogposts...