1) It's FRIDAY, MARCH 15. As ridiculous as it sounds, and it does (!), the Fort Myers Miracle minor-league baseball team is having a 'Greg Cote Day' at its ballpark on Saturday, July 27. Go here for ticket information. 2) Football is never done, and so it's always the perfect time to buy our 'Fins At 50' book for the Dolfans in your life. Check it out on Amazon. 3) In The Previous Blogpost (ITPB): Hot Button Top 10, on Dolphins' Tannehill/Gore/Wake, Blake Shelton concert review & more. 4) Join us on Twitter @gregcote. Also Facebook and Instagram.

BOUTIQUE COLUMN!: GREATEST COACH YOU'VE NEVER HEARD OF HAS NOVA SOUTHEASTERN HOOPS SOARING: NSU's men's  basketball team is 26-3, ranked No. 3 in NCAA Division II and hosting this weekend's eight-team Southern Regional in their Davie campus arena. They play Saturday at 5. In my latest column I write of coach Jim Crutchfield (pictured), who arrived last season and has dramatically turned around a once moribund program with few fans. Crutchfield has the best career winning percentage of any body who has coached at least 10 seasons in the NCAA. Any division. Ever. This is a coach and a team easy to root for. To read my latest column, please visit 'Coach Crutch' Has Nova Southeastern Soaring.

DOLPHINS FREE-AGENCY: MIAMI KEEPS LOSING MORE THAN GAINING: The ledger could have balanced somewhat if Miami had landed quarterback Teddy Bridgewater (pictured), but, instead, T-Bridge -- a Miami native opts to stay in New Orleans as a backup in yet another free agency defeat for the Fins. The Dolphins have had a rough start to NFL free agency -- especially juxtaposed to the noisy splashes being made by the Browns, Jets and elsewhere around the league. We detail the reasons why in our recent column. Please visit Dolphins Not Better Now Than When Last Season Ended to read. 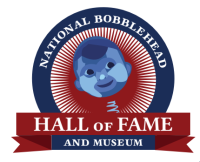 A TOUR OF THE NATION'S NEW BOBBLEHEAD SHRINE ... AND ITS MIAMI INFLUENCE: The National Bobblehead Hall of Fame and Museum just opened last Month in Milwaukee, founded by a couple of lifelong buddies who quit better-paying adult jobs to pursue their wacky dream. Now they run an empire of some 10,000

unique bobbleheads -- about 6,500 of them on display. I have always loved bobbleheads. Never out of style. Always kitschy. Always ridiculous and great. Custom bobbleheads are becoming big, and a couple of Christmases ago my wife sent out a photo of me somewhere and out of China magically arrived a Greg Cote bobblehead (pictured left). Must have been an old photo. I look young and thin. It looks nothing at all like me. I love it! Anyway, the national bobblehead shrine I write of in my recent column has a bunch of Miami stuff in it, and in fact drew some of its inspiration from the bobblehead display at Marlins Park. Their best-selling bobblehead (by far) has been Sister Jean, the 99-year-old Loyola basketball nun. But the co-founder also tells us the Hurricanes/Turnover Chain bobblehead was huge the season before last. Fun story, different column. To read it, please visit Trip to Miami Inspired a National Bobblehead Shrine.

Other most recent columns: A Case For Tannehill, Gore And Wake All Returning. Also: Jeter Gets Reminder Why Marlins Boss Is His Toughest Position Yet, The Intrigue Left: Will LeBron Go Out On Top?, Transgender-Athlete Firestorm A Necessary Debate and Across the Rio Grande to the PGA Tour.

FAREWELL, FRANK GORE AND CAM WAKE: Headed to Buffalo in free agency, running back Frank Gore, the Old Cane, gave the Dolphins one very good year, and dirt cheap, too. On merit, by all of the usual measurements -- contribution, skill, cost -- he deserved to be re-signed by Miami. Same for defensive end Cameron Wake, gone to Tennessee after giving Miami a great career that will see him on team's Honor Roll. Unfortunately, both men were caught in the wide new net being cast as the Fins weed out their older players in a broad, ground-up reboot. It is not quite as stark or all-inclusive as what the Marlins are doing, but pretty close. In the long term it may work (if a top quarterback is a part of it). But in the short term it hurts. The Dolphins are not better today for the absence of Frank Gore and Cam Wake. They are diminished.

LATEST 'BACK IN MY DAY': THEME CRUISES!: Cruisin' ain't what it used to be, unfortunately. Here's the new BIMD that premiered on Tuesday's Le Batard Show on ESPN Radio and ESPNews:

Select other recent columns: Riley Scoffs At Retirement Because His Work Isn't Done / Wade's 'Last Dance' A Masterwork In How To Say Goodbye / Six Reasons To Be Hopeful About Marlins' Rebuild / Stain On NFL Stays Until Kaepernick Is Signed / He Was Wrong To Stiff Caddie, But Vilifying Kuchar is Wrong, Too / Why Murray Is Perfect Fit For Dolphins / From Dark and Empty to the Top Of the World: Dan Le Batard at 50.

Posted by Greg Cote at 8:30 AM in Back In My Day, Bobbleheads, LeBatard, Marlins, Me, MMA, Radio, Videos | Permalink | Comments