It's SATURDAY, JULY 9. Was back in-studio with Le Batard Show on Thursday (not Tuesday) this week. Check out that day's show podcasts. 2) Join me on Twitter, Instagram, Facebook and TikTok. 3) In The Previous Blogpost (ITPB): Hot button Top 10, Nobody wins and everybody lsees as NFL weighs Deshaun Watson punishment, An appreciation of Heat's Pat Riley, new Greg Cote Show podcast, updated Mount Gregmore of columns. 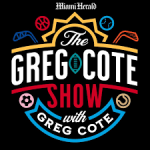 GREG COTE SHOW PODCAST: NEW EPISODE, HOLIDAY SPECIAL, OUT NOW!: Our 29th episode of 2022 and 120th overall is out now! A new episode drops every Monday at 7 a.m. ET on Apple, Spotify -- wherever else you pod and of course at MiamiHerald.com. Find all 120 we've done so far HERE, free. In the newest episode: It's a star-spangled Fourth of July holiday party on Fort Lauderdale Beach and you are invited! Also, a new Mount Gregmore, and the latest event in our Father-Son Olympics -- cornhole -- is the closest and most exciting yet. Hit up GCS2229 for full story on the latest ep, and watch our weekly YouTube preview. Thanks as always for the support, pod family. Please listen, review, follow, subscribe et cetera and so forth. We simulcast on Sirius XM, too, Mondays from 5-6 p.m. ET. And now, brand new: Our podcast has a website and merch store: Check it out at TheGregCoteShow.com and visit the merch store by clicking 'Shop'. New items! Also check out our podcast's new YouTube channel.

Nobody Wins, Everybody Loses, As NFL Weighs Deshaun Watson Punishment

The End Isn't Here, But It's Coming. Miami Sports Has Had Nobody Like Heat's Pat Riley

Title IX Empowered Women. The Supreme Court Has Done The Opposite

The Hilltop: The five columns before that: Florida Panthers Swap Coach Of Year Finalist For Guy No. 1 In Career Losses / 20 Cases Settled, But Deshaun Watson Won't Begin To Clear Name Without Remorse / Tua Will Handle Scrutiny & Pressure. Question Is If Rest of Miami Dolphins Can / 'Black Cloud' Over U.S. Open Amid Golf Civil War In Time Of Revolution In Sports / Curry's 4th NBA Title, 1st Finals MVP Opens Path To Michael/LeBron Best-Ever Talk

I love you.  I do not always like you.

There have been times, distant and present, when I hated what I was seeing in and of my country.

That began for me as far back as when the term Watergate was coined for the skullduggery of a sitting president, at a time when protests over the Vietnam war enflamed the nation. Many saw the protesters as anti-American. “Love It Or Leave It,” the bumper stickers of the day read. No. Love it or change it. Love it or make it better. 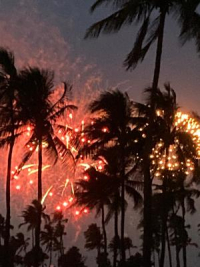 America was founded on ideals lofty, ideals still unfulfilled 246 years later. Equality. Liberty and justice for all. We are still reaching for that. (Aren’t we?)

I say to the country I love, keep reaching, please. Keep searching. Be better.

Today I hate so much of what I see and feel of my country.

I am troubled by a political divide that is the deepest in my lifetime.  A present day when we cannot always agree even on what is the truth.  I hate a gun culture so unyielding to protect even assault weapons that the ongoing mass killing of innocents does not seem too high a price to pay.  I am shamed by a Supreme Court that would betray women and the will of the people.  I cringe that snapshots of the storming of the U.S. Capitol and the march of domestic terrorist groups convey to the rest of the world that this is who we have become. It isn’t. (Is it?)

I stand for the national anthem because I am standing for that founding ideal so worth protecting.  It is an intensely personal choice and, because it is, I also respect those who in good conscience do not, because in their freedom to express their anger or disillusionment they need an outlet.  We all say or pray or plead or demand of our country, “Be better,” in our own way. There was much talk on social media in the wake of the dismantling of Roe v. Wade that America does not feel worth celebrating this Fourth of July. I get that.  It is not the first Fourth of July I have had such thoughts.

But I will celebrate this holiday, and this country, even with everything about it that saddens and disappoints me.  I will hang on to those founding ideals, and the desperate hope that we have not quit fighting to reach them, and never will.

At some point on this holiday I will see my smiling 4-year-old granddaughter, blissfully oblivious to all the wrong around her in America, and hope she grows up in a nation that quits fighting with itself but never quits fighting for its ideals.

I do not always like you, America.  But for all time and to the bone, I love you.  And is it with that love and a patriotic heart that I beseech you, and all of us: Be better.

Select other recent columns: Why'd World Cup pick Miami? Thank Dolphins Founder & Unlikely Soccer Visionary Joe Robbie / Serena Playing Wimbledon Still Matters, Maybe More Than Ever. Because It Feels Like Goodbye / Free' speech? Ignorance Cost Del Rio $100,000. But He's Lucky To Still Have A Job / Why Browns' Watson Faces, Deserves Lengthy Suspension From NFL / Whatever Happened To Don King? Famed Boxing Promoter Back At 90 For Last Bow in Miami / Mickelson, Johnson et al Are Saudi Pawns Pocketing Blood Money / Dolphins Denied It, But Deshaun Watson Lawyer Reveals How Close Miami Was To A Deal / A Lesson In Sioux City: Sports And Real Life In Age Of Mass Shootings / ‘Centerpiece of futbol in world’: Dream is green-lit. Now can Inter Miami deliver? / Only In Miami: Ex-Marlins Prez Samson Joins Fight vs. 'Boondoggle' Soccer Stadium / Blowing Up Dolphins' Brady-Payton Plan Parting Shot Of Flores Lawsuit. For Now / Inter Miami Has Been Major Failure For David Beckham. Here's The BIg Fix / Rotation Set, Lineup Improved, Excuses Gone. Time For Marlins To Win / Could Have Died. Nearly Lost a Leg. Tiger Playing Masters Means He's Already Won / Marlins Owner Sherman Said He'd Spend. Payroll Says It Hasn't Been Enough / Crushing End Short Of Final Four, But Miami Hurricanes' NCAA Run Was Exhilarating Milestone / Tyreek Hill Trade, Terron Armstead Signing A Win-Now Power Play By Dolphins / When Spoelstra Joined Heat's 'Inner Circle' And Became Riley's Next Coach / Why Brittney Griner Is Lost In Russia / Brady A Dolphins Part Owner? Why It Could Happen / Top 15 Figures (Non-Athletes) In Miami Sports History / Hall of Fame Keeps Saying No, But Zach Thomas Keeps Feeling Gratitude / McDaniel Overcame Much In Own Life, Now Must Overcome Dolphins' Turmoil And Win / An Inside Preview Of Le Batard Show's Upcoming Musical. Yes, Musical / Ranking Flores/Ross Bombshell Among Biggest Dolphins Scandals / Ross Should Be Done As Fins Owner if Flores Allegations Are True  / Ortiz Makes Hall, But Final Denial Of Bonds, Clemens A Shame on Voters, Baseball / 'There Was A Pall On Us': The Panthers Season That Would Not Be Derailed / State Of Miami Sports: Every Major Team, Graded Top To Bottom / Dolphins Firing of Flores The Unjustified Travesty Of A Clown-Show Owner / Canes Land Grand Prize In Cristobal, So No Excuses Left. New Glory Days A Must / 50 Years At the Herald For Me -- And a Lifetime Of Gratitude / UM And Blake James Parted Ways With Class -- Which Butch Davis Didn't Get From FIU / Dolphins Fans, Ex-Players Gather For Emotional Farewell to Don Shula, Father of the Glory Days / Fairy Tale With Wrong Ending: Remembering Jose Fernandez 5 Years Later / An Appreciation of Udonis Haslem As He Re-Ups For 19th Heat Season / College Football and FSU Lose a Treasure In Passing Of Bobby Bowden /  Biles' Withdrawal For Mental-Health Reasons Merits Empathy, Not Scorn / Where Dolphins Rank Among Teams With Longest Championship Droughts / Nassib Coming Out As Gay NFL Player A Milestone In Sports History / Le Batard Bet On Himself And His Audience -- And Won Big / Justice For George Floyd Helps Heal Our Shaken Faith, But Fight For Equality Goes On / In History And In Hearts, Howard Schnellenberger Will Matter For All Time / Reality, Loss, Comeback: How Sports Has Been Guiding Light In America's Awful Past Year / Time-Travelling To 1960s And Childhood, When The Baseball Card Was King / Marlins Hit History-Making Home Run With Kim NG Hire As GM / Don Shula, 1930-2020, R.I.P. / What Shula Meant to a Father & Son. The Boy Was Me