1) It's SATURDAY, FEBRUARY 26. I'm humbled to have been named a national top-10 sports columnist in the Division A (major outlets) category once again by the Associted Press Sports Editors. Big honor. Thanks, readers! 2) Programming note: Was back on with Le Batard Show this week. Check out Wednesday's show podcasts, including a new Back In My Day. 3) Join me on Twitter, Instagram and Facebook. Follow the Greg Cote Show podcast separately on Twitter, Instagram and now TikTok, too! 4) In The Previous Blogpost (ITPB): Hot Button Top 10, Dolphins' offseason map to improvement, new Greg Cote Show podcast.

GREG COTE SHOW PODCAST: NEW 100TH EPISODE OUT NOW!: Our 9th episode of 2022 and 1andmark 100th overall is out now! A new pod hits every Monday at 7 ET on Apple, Spotify, Google, Amazon, Stitcher, Megaphone, iHeart -- wherever you pod, and of course at MiamiHerald.com. Find all 100 we've done so far HERE, free. In our most recent episode, we throw a party for our 100th ep, recap the annual PFPI Gala, discuss recent big Le Batard Show news and more. Thanks as always for the support, pod family. Please listen, rate, review and follow. (Our pod simulcasts on Sirius XM every Monday 5-6 p.m. ET). 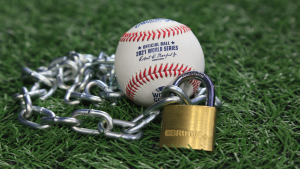 MLB PLAYERS ARE ON RIGHT SIDE IN LABOR DISPUTE, BUT BASEBALL HAS FAR BIGGER PROBLEM TO FIX: Major League Baseball slogs, regrettably, avoidably, toward the eighth season in its history to suffer a reduced schedule and shortened season. The first in 1918-19 and the most recent before now in 2020 had pretty good excuses: A world war and a global pandemic. Every one in between, including this one, were rooted in money and played out at the intersection of avarice and intractability. So this should be opening weekend for spring training. Roger Dean Stadium in Jupiter, training camp of the Marlins 90 minutes north of Miami, should be lively, anticipation in the air. Instead the place is quiet but for the exchange of rancor between MLB executives and players union reps (including the Marlins’ Miguel Rojas) meeting there and failing to solve this. Stalemate. Nobody wins. Fans lose. Baseball loses. Plainly, players are on the right side here — the workers, not the baseball barons who pay them. But here’s the thing, and it’s quite remarkable: This acrimonious lockout that is turning off fans and almost certainly will truncate the season — it isn’t even MLB’s biggest problem. For our full latest column: Players Are On Right Side In Labor Dispute, But MLB Has Far Bigger Problem To Fix.

MICKELSON'S SUPPORT OF SAUDI  GOLF LEAGUE SADLY MIRRORS SPORTS' BLIND EYE TO HUMAN RIGHTS: Phil Mickelson did it. He did it with a perfect precision to equal the finest golf shot he ever sculpted. With one comment, he pretty much explained why the sports world is clueless on how to deal with the real-world matter of human rights. He was speaking of the Saudi

Arabian government’s aim to start the Super Golf League, a huge-money new professional tour to rival the PGA Tour. The comments, public this week, are from a forthcoming book by Alan Shipnuck, “Phil: The Rip-Roaring (and Unauthorized!) Biography of Golf’s Most Colorful Superstar.” “They’re scary motherf------ to get involved with,” Mickelson said, of the Saudi government. “We know they killed [Washington Post reporter Jamal] Khashoggi and have a horrible record on human rights. They execute people over there for being gay. Knowing all of this, why would I even consider [their new league]? Because this is a once-in-a-lifetime opportunity to reshape how the PGA Tour operates. The Saudi money has finally given us that leverage.” So there it is: Mickelson, with legacy-damaging clarity, speaking for sports at large in the unseemly exchange of principle for pay. Most other golfers have rebuked the Saudi effort and pledge allegiance to the PGA Tour. Rory McIlroy called Mickelson’s comments “naive, selfish, egotistical and ignorant. Just very surprising and disappointing. Sad.” Mickelson has caused a firestorm not only because he’s the enormously popular “Lefty,” one of the game’s all-time greats, but because athletes as individuals rarely are willing to put their name on being OK with human rights abuses so long as the money is right. Normally that is left to sports’ governing bodies and to television networks to play that sordid game with such aplomb — to follow the money with blinders on for everything else. For our full recent column: Mickelson's Support Of Saudi Tour Mirrors Sports' Blind Eye to Human Rights.

MOUNT RUSHMORE ON STEROIDS: THE TOP 15 FIGURES (NON-ATH:ETES) IN MIAMI SPORTS HISTORY: Presidents Day on Monday, the national holiday for White House occupants through history, got us thinking about the leaders of distinction across the decades in Miami and South Florida major team

sports. Franchise owners, team executives and coaches — we’re talking everyone but players themselves. Who have been the most important, influential figures we’ve had, not counting athletes, all sports and all time? There was a passing-of-the-baton quality to the timelines of the two men highest on our list, as Pat Riley was introduced in Miami by the Heat in September 1995, just a couple of months before Don Shula retired from the Dolphins. I fancy myself something of a Miami sports historian, so I think I have a strong top 15 here. Then again, Presidents Day can’t seem to decide if there’s an apostrophe in there, so nothing is certain. (I would fight you on my first two, though). For the full column including the list of top 15 non-athletes in Miami team sports history: Top 15 Figures (Non-Athletes) In Miami Sports History.

Other latest columns: Who Dolphins, With Windfall To Spend, Should Target In Offseason To Fix Offense Fast. Also: An Inside Preview Of Le Batard Show's Upcoming Musical. Yes, Musical / The Lesson For Dolphins in Rams-Bengals Super Bowl Result / Hall of Fame Keeps Saying No, But Zach Thomas Keeps Feeling Gratitude / and McDaniel Overcame Much In Own Life, Now Must Overcome Dolphins' Turmoil And Win.

Select other recent columns: Dolphins New Coach McDaniel Must Win, Heal Broken Franchise / Ranking Flores/Ross Bombshell Among Biggest Dolphins Scandals / Ross Should Be Done As Fins Owner if Flores Allegations Are True  / The G.O.A.T. We Never Saw Coming: From 199th Drafted To History, A Salute To Tom Brady / Like Him Or Don't, Antonio Brown Not Always To Blame -- And Wasn't In Bucs Divorce / Ortiz Makes Hall, But Final Denial Of Bonds, Clemens A Shame on Voters, Baseball / Mahomes-Allen Air Show A Reminder How Much Better Dolphins And Tua Need To Be / Time Is Right (But Running Out) For MLB to Reinstate Pete Rose /'There Was A Pall On Us': The Panthers Season That Would Not Be Derailed / No-Vaccine Is Your Right. But There Are Consequences as Djokovic Was Reminded / State Of Miami Sports: Every Major Team, Graded Top To Bottom /Dolphins Firing of Flores The Unjustified Travesty Of A Clown-Show Owner / Canes Land Grand Prize In Cristobal, So No Excuses Left. New Glory Days A Must and 50 Years At the Herald For Me -- And a Lifetime Of Gratitude.

Select other columns: Dolphins Win, Finish 9-8, Now Must Commit To Build Around Tua / Why Saban 'What-If' Still Haunts Miami 15 Years later / No Playoffs And No Idea Yet On Tua Worst Possible Way For Dolphins To End Season / Revealing My 2022 Baseball Hall of Fame Ballot / Georgia Crushes Michigan in OB. The Bad News? 'Bama Next / Party, Meet Hangover: Tua, Dolphins Out Of Playoff Chase With Loss at Titans / Hey, America, After 7th Straight Win, Do Miami Dolphins Have Your Attention Yet? / Duuuuuke Lifts Fins to 6th Straight Win, .500 / / UM Legend Frank Gore Talks NFL Future, Cristobal, Boxing As He Prepes For Ring Debut / Tua Keeps Showing Dolphins How Silly They Were To Doubt Him So Soon / UM And Blake James Parted Ways With Class -- Which Butch Davis Didn't Get From FIU / How Miami Dolphins Are Poised to Transform Their 1-7 Start Into Playoff Contention / Dolphins' Watson Lust Ruined Season, Damaged Tua. And That Starts With Owner Ross / Quenneville Rightly Sacked as Panthers Coach Over 2010 Chicago Scandal / As Dolphins' Dysfunction Surrounds Him, 10 Ways Tua Is The Unluckiest Man On Earth / State of the Art: Heat, Miami's Best-Run Franchise, Sails In Opener / 'Time to Hunt': Cats' Hyped Season Off to Wild, Winning Start / Dolphins Fans, Ex-Players Gather For Emotional Farewell to Don Shula, Father of the Glory Days / If Sports Had A Spine, Kyrie Irving & Other Anti-Vaxxers Wouldn't Be Playing / Kyle Lowry Must Channel 'Doctor Of Greatness' If Heat Is To Chase NBA Title / Fairy Tale With Wrong Ending: Remembering Jose Fernandez 5 Years Later / Why It's Too Soon, And Dumb, To Quit On Tua As Dolphins Answer / Year Of Reckoning, And Impatience, For Slow-Starting Dolphins & Canes / Hope And Hype Are Sky-High. Time For Florida Panthers To Finally Deliver / Miami Herald's 2021 NFL Team Rankings: You Won't Believe Where Dolphins are / Why Dolphins, Canes Should Be Taking Lead In Requiring Fans To Be COVID-Vaccinated / An Appreciation of Udonis Haslem As He Re-Ups For 19th Heat Season / Unraveled: The Story Behind Who Aubrey Huff Became / College Football and FSU Lose a Treasure In Passing Of Bobby Bowden / Biggest Victory Of Hall Of Famer Jimmy Johnson's Life Was Getting His Son Back / Biles' Withdrawal For Mental-Health Reasons Merits Empathy, Not Scorn / Where Dolphins Rank Among Teams With Longest Championship Droughts / Dolphins Owner Ross Unveils New $135 Million Training Site As Another Reason Team Must Win Now / Hot Seat Scale: Ranking Miami's Biggest Coaches By Most to Least Job Security / May Sha'Carri Richardson Be Last Victim Of Olympics' Archaic Marijuana Rules / 'I'm D'Eriq King For College Hunks Hauling Junk!' It's Strange New World in College Sports / Nassib Coming Out As Gay NFL Player A Milestone In Sports History / Fate Snatched Basketball From Chris Bosh. His new Book Is Part of His Journey Of Healing / Where's Tua? Ranking Our Top 15 South Florida Pro Athletes 25 And Younger / Pythons, Peppers, Pirate Flag Raised. Inside Le Batard's 24-Hour Triumph / Le Batard Bet On Himself And His Audience -- And Won Big / Justice For George Floyd Helps Heal Our Shaken Faith, But Fight For Equality Goes On / In History And In Hearts, Howard Schnellenberger Will Matter For All Time / Women Keep Accusing Deshaun Watson of Sexual Misconduct. But Will It Matter to NFL Teams? / Reality, Loss, Comeback: How Sports Has Been Guiding Light In America's Awful Past Year / Beckham's Resolve Tested By Tumult As Inter Miami Nears 2nd MLS Season / Time-Travelling To 1960s And Childhood, When The Baseball Card Was King / Doesn't Matter If Tiger Woods Never Wins Again. We Are Lucky He's Alive / Final Herald NFL 2020 QB Rankings / Marlins Hit History-Making Home Run With Kim NG Hire As GM / In a Pandemic-Battered Season For FIU, Butch Davis' Love Of Coaching Survives / Don Shula, 1930-2020, R.I.P. / What Shula Meant to a Father & Son. The Boy Was Me.