GREG COTE SHOW PODCAST: NFL! ROBOT UMPIRE! M&M SCANDAL! NEW EPISODE OUT NOW: Our 5th episode of 2022 and 96th overall is out now! A new pod drops every Monday morning at 7 ET on Apple, Spotify, Google, Amazon, Stitcher, Megaphone, iHeart -- wherever you pod, and of course at MiamiHerald.com. Find all 96 we've done so far HERE, free. In our brand new episode, Chris and Greg exalt over the NFL's most exciting playoff weekend ever, and have an exclusive 1-on-1 chat with a Robot Umpire. Also in the new ep: Bomb dog retires;  M&Ms scandal; Greg apologizes to Newlywed Mark for referring to a part of his wedding as a 'nightmare' on Le Batard Show; Yeti reports live from a hospital bed. Thanks as always for the support, pod family. Please listen, rate, review and follow. (Our pod simulcasts on Sirius XM every Monday 5-6 p.m. ET).

NFL CHAMPIONSHIP ROUND PLAYOFF PICKS: 4 TEAMS LEFT. 2 SUPER BOWL TICKETS. HERE'S WHO's GOING: Had a rough week in the Divisional Round and a perfect example of our luck was Bills blowing that lead (and a win for me) with 13 seconds left. Oh well. Move on. Finish strong. Our picks for Sunday's Bengals-Chiefs AFC Championship Game and 49ers-Rams NFC title game: NFL Championship Playoff Gems. Previous: NFL Divisional Playoff Gems, NFL Wild-Card Playoff Gems. 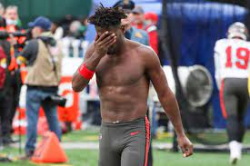 LIKE HIM OR DON'T, ANTONIO BROWN NOT ALWAYS TO BLAME -- AND WASN'T IN BUCS DIVORCE: The most memorable, talked-about play of this NFL season — the one that didn’t happen on the field — lives on. It does so in the legal action being pursued. It does so in the wondering whether Tom Brady and Tampa Bay might be playing Sunday, still chasing a second straight Super Bowl win, if it hadn’t happened. The spectacle resonates, too, because it dances on the periphery of the brain trauma football can cause, and the discussion of mental health becoming more and more open in sports. And in the altogether unsurprising idea that a head coach might sometimes place winning ahead of a player’s health on his list of priorities. I know: Antonio Brown is easy to dislike, largely through his own actions through the years. No dispute. But it doesn’t means he’s wrong here. “The trigger was telling me I’m not allowed to feel pain,” he said. “I acknowledge my past. But that doesn’t make me a second-class citizen. My past does not forfeit my right to be heard when I am in pain.” Today Brown is 33 and at least temporarily unemployed, turning 34 when training camps start this summer. Today he is a man still trying to explain why, during a game few weeks ago, Bucs at Jets, Brown abruptly left the bench in anger, peeled off his jersey and pads, tossed them into the crowd, put up a peace sign with his fingers, and trotted off, turning his back on his team, profession and the NFL. For our full latest column, visit Like Him Or Don't, Antonio Brown Not Always To Blame -- And Wasn't In Bucs Divorce.

ORTIZ MAKES HALL, BUT FINAL DENIAL OF BONDS, CLEMENS A SHAME ON VOTERS, BASEBALL: David “Big Papi” Ortiz, Boston Red Sox icon and one of four men in MLB history to hit 500 home runs and win three World Series, was elected Tuesday into the National Baseball Hall of Fame with distinction as a first-ballot honoree. It wasn’t the biggest news to come out of the announcement. This was: Barry Bonds and Roger Clemens -- arguably the greatest hitter and pitcher to ever play the game -- were denied the Hall in their 10th and final year of eligibility to appear on the ballot. And Miami-raised Alex Rodriguez was dealt a massive rebuke in his first year of eligibility, despite career numbers that by themselves suggested he might sail into Cooperstown in a landslide vote. Baseball’s Steroids Era lives on. It is still taking names and meting out punishments. Lifetime sentences, apparently. That Bonds and Clemens were turned away for the 10th year in a row defies fair logic and conveys a vindictiveness that does not serve well either MLB, the Hall of Fame or the voting members of the Baseball Writers Association of America, of whom I am one -- proudly, usually, but less so as the 2022 class was announced. For our full recent column, visit Ortiz Makes Hall, But Final Denial Of Bonds, Clemsn A Shame on Voters, Baseball.

MAHOMES-ALLEN AIR SHOW A FACE-SLAP REMINDER HOW FAR DOLPHINS, TUA STILL HAVE TO GO: We watch NFL games through our own prism, right? From the vantage of how our own team compares. For a Miami Dolphins fan this exercise is called “torture.” But never quite like it was Sunday night, in the astounding crescendo to the single greatest weekend in the league’s playoff history -- led by an epic duel between Patrick Mahomes and Josh Allen. The Kansas City Chiefs and Buffalo Bills offenses were unstoppable in the hands of two premier quarterbacks who took mere seconds to trade points until finally Mahomes and the Chiefs prevailed in overtime 42-36. It was the greatest possible advertisement for the NFL. But from where Miami sits, alas, Sunday night was depressing. Sobering. Enough to make a Dolfan set the alarm for around 2034, which might be about when the two quarterbacks now most in their way are finally retired or at least in decline. Mahomes is 26. Allen is 25. And there is not a single Chiefs or Bills fan today — not one, anywhere — wondering if their team has the right quarterback. If he’s good enough or maybe possibly someday could be. Allen pilots the new king of the AFC East, Miami's division. Mahomes leads the king of the AFC, Miami’s conference. These are the two quarterbacks, and teams, the Dolphins have to figure out how to be better than for any chance to reach the Super Bowl in the foreseeable future. For our full recent column, visit Mahomes-Allen Air Show A Reminder How Much Better Dolphins And Tua Need To Be.

Select other recent columns: Time Is Right (But Running Out) For MLB to Reinstate Pete Rose / 'There Was A Pall On Us': The Panthers Season That Would Not Be Derailed / No-Vaccine Is Your Right. But There Are Consquences, as Djokovic Was Reminded / State Of Miami Sports: Every Major Team, Graded Top To Bottom / and Dolphins Firing of Flores The Unjustified Travesty Of A Clown-Show Owner. Also: Dolphins Win, Finish 9-8, Now Must Commit To Build Around Tua / Why Saban 'What-If' Still Haunts Miami 15 Years later / No Playoffs And No Idea Yet On Tua Worst Possible Way For Dolphins To End Season / Revealing My 2022 Baseball Hall of Fame Ballot / Canes Land Grand Prize In Cristobal, So No Excuses Left. New Glory Days A Must and 50 Years At the Herald For Me -- And a Lifetime Of Gratitude.

Select other recent columns: Georgia Crushes Michigan in OB. The Bad News? 'Bama Next / Party, Meet Hangover: Tua, Dolphins Out Of Playoff Chase With Loss at Titans / Hey, America, After 7th Straight Win, Do Miami Dolphins Have Your Attention Yet? / Duuuuuke Lifts Fins to 6th Straight Win, .500 / / UM Legend Frank Gore Talks NFL Future, Cristobal, Boxing As He Prepes For Ring Debut / Tua Keeps Showing Dolphins How Silly They Were To Doubt Him So Soon / UM And Blake James Parted Ways With Class -- Which Butch Davis Didn't Get From FIU / How Miami Dolphins Are Poised to Transform Their 1-7 Start Into Playoff Contention / Dolphins' Watson Lust Ruined Season, Damaged Tua. And That Starts With Owner Ross / Quenneville Rightly Sacked as Panthers Coach Over 2010 Chicago Scandal / As Dolphins' Dysfunction Surrounds Him, 10 Ways Tua Is The Unluckiest Man On Earth / State of the Art: Heat, Miami's Best-Run Franchise, Sails In Opener / 'Time to Hunt': Cats' Hyped Season Off to Wild, Winning Start / Dolphins Fans, Ex-Players Gather For Emotional Farewell to Don Shula, Father of the Glory Days / If Sports Had A Spine, Kyrie Irving & Other Anti-Vaxxers Wouldn't Be Playing / Kyle Lowry Must Channel 'Doctor Of Greatness' If Heat Is To Chase NBA Title / Fairy Tale With Wrong Ending: Remembering Jose Fernandez 5 Years Later / Why It's Too Soon, And Dumb, To Quit On Tua As Dolphins Answer / Year Of Reckoning, And Impatience, For Slow-Starting Dolphins & Canes / Hope And Hype Are Sky-High. Time For Florida Panthers To Finally Deliver / Miami Herald's 2021 NFL Team Rankings: You Won't Believe Where Dolphins are / Why Dolphins, Canes Should Be Taking Lead In Requiring Fans To Be COVID-Vaccinated / An Appreciation of Udonis Haslem As He Re-Ups For 19th Heat Season / Unraveled: The Story Behind Who Aubrey Huff Became / College Football and FSU Lose a Treasure In Passing Of Bobby Bowden / Biggest Victory Of Hall Of Famer Jimmy Johnson's Life Was Getting His Son Back / Biles' Withdrawal For Mental-Health Reasons Merits Empathy, Not Scorn / Where Dolphins Rank Among Teams With Longest Championship Droughts / Dolphins Owner Ross Unveils New $135 Million Training Site As Another Reason Team Must Win Now / Hot Seat Scale: Ranking Miami's Biggest Coaches By Most to Least Job Security / May Sha'Carri Richardson Be Last Victim Of Olympics' Archaic Marijuana Rules / 'I'm D'Eriq King For College Hunks Hauling Junk!' It's Strange New World in College Sports / Nassib Coming Out As Gay NFL Player A Milestone In Sports History / Fate Snatched Basketball From Chris Bosh. His new Book Is Part of His Journey Of Healing / Where's Tua? Ranking Our Top 15 South Florida Pro Athletes 25 And Younger / Pythons, Peppers, Pirate Flag Raised. Inside Le Batard's 24-Hour Triumph / Le Batard Bet On Himself And His Audience -- And Won Big / Justice For George Floyd Helps Heal Our Shaken Faith, But Fight For Equality Goes On / In History And In Hearts, Howard Schnellenberger Will Matter For All Time / Women Keep Accusing Deshaun Watson of Sexual Misconduct. But Will It Matter to NFL Teams? / Reality, Loss, Comeback: How Sports Has Been Guiding Light In America's Awful Past Year / Beckham's Resolve Tested By Tumult As Inter Miami Nears 2nd MLS Season / Time-Travelling To 1960s And Childhood, When The Baseball Card Was King / Doesn't Matter If Tiger Woods Never Wins Again. We Are Lucky He's Alive / Final Herald NFL 2020 QB Rankings / Marlins Hit History-Making Home Run With Kim NG Hire As GM / In a Pandemic-Battered Season For FIU, Butch Davis' Love Of Coaching Survives / Don Shula, 1930-2020, R.I.P. / What Shula Meant to a Father & Son. The Boy Was Me.