Note to readers: I'm burning a bunch of unused vacation days throughout December so am having fewer columns out lately. But am still producing occasional columns and regular staples such as the weekly NFL picks, the podcast and this blog. 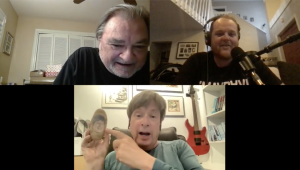 GREG COTE SHOW PODCAST: SPECIAL NEW EPISODE WITH BELOVED HUMORIST DAVE BARRY OUT NOW!: Our 49th episode of 2021 and 91st overall is out now -- and it's a must-hear special one. A new pod drops every Monday at 7 ET on Apple, Spotify, Google, Amazon, Stitcher, Megaphone, iHeart -- wherever you pod, and of course at MiamiHerald.com. Find all 91 we've done so far HERE, free. In our newest episode: Pulitzer Prize-winning author and humorist Dave Barry joins us for a lengthy conversation ranging from the inanity of his 2021 Holiday Gift Guide to a serious talk about some of the personal tragedy he's lived thorugh and how that has informed his humor. Also in the new episode: My Dolphins Christmas song, the Fins' 6th win in a row, Greg's Lobos gird for fantasy playoffs and much more. Thanks as always for the support, pod family. Please listen, rate, review and follow. (Our pod simulcasts on Sirius XM every Monday 5-6 p.m. ET).

Our other most recent columns: Canes Land Grand Prize In Cristobal, So No Excuses Left. New Glory Days A Must / UM Legend Frank Gore Talks NFL Future, Cristobal, Boxing As He Prepes For Ring Debut / Tua Keeps Showing Dolphins How Silly They Were To Doubt Him So Soon / 50 Years At the Herald For Me -- And a Lifetime Of Gratitude

NFL WEEK 16 PICKS: DOLPHINS-SAINTS AND ALL THE REST -- AND A GOOD START THURSDAY!: Our hot streak cooled a bit last week at 10-6 overall and 7-9 against the spread, including an end to our remarkable six-game wining streak on outright Upset of the Week bull's-eyes. This week we call three more outright upsets, and nailed the first Thursday night to get our week off to a big start. We had @Titans (+3 1/2) beating 49ers, 23-20. And Titans won, 20-17. For all of our latest picks including Dolphins-Jets, visit NFL Week 16 Gems.

(*) OUR PICKS: HOT STREAK COOLS WITH A BIT OF A SO-SO WEEK: Our recent hot streak cooled a bit in Week 15 as went an OK 10-6 overall but a rough 7-9 against the spread (including 0-4 ATS on the Monday and Tuesday doubleheaders). That included an end to our fabulous six-game winning streak on Upset of the Week bull's-eye when Pats failed to win at favored Colts. Bright side: Nailed one other outright (mini) upset with Steelers over Titans, and had a quartet of 'dogs-with-points in covers by Lions, Jets. Texans and Ravens.

(*) GREG'S LOBOS: OFF PLAYOFF BYE, 'BOS AWAIT SEMIFINAL MATCHUP: Lobod enjoyed a first-round playoff bye after a 9-5 seaeson record earned the No. 2 playoff. That was important, giving QB Lamar Jackson time to -- I hope -- get healthy. Our semifinal opponent in PFPI Fantasy, our 10-team friends 'n family league, is my nephew Joe, a tough draw. Though he finished 8-6, Joe's team outscored me by an average of 19 points a game this season and handily won our lone head-to-head meeting. I need you, Luck. You with me?