NFL Week 5 picks out now!; plus Why it's way too soon and dumb to quit on Tua as Dolphins answer. Latest column; also Fins, Canes' woes make it year of reckoning for both, Greg Cote Show podcast, Week 4 results for Picks/Lobos/QB Rankings & more

1) It's SATURDAY, OCTOBER 9. Was back in with Le Batard Show this week and it was eventful to say the least. Be sure to check out Tuesday's show podcasts. 2) Join me on Twitter, Instagram and Facebook. Follow the Greg Cote Show podcast separately on Twitter, Instagram and now TikTok, too! 3) In The Previous Blogpost (ITPB): Hot Button Top 10, Dolphins' inept home loss to Colts, Shula 'Celebration of Life,' new Greg Cote Show podcast & more.

GREG COTE SHOW PODCAST: SETH WICKERSHAM ON PATRIOTS BOOK, LE BATARD SHOW GOLF ON NEW EPISODE OUT NOW!: Our 38th episode of 2021 and 80th overall is out now! A new pod drops every Monday at 7 ET on Apple, Spotify, Google, Amazon, Stitcher, Megaphone, iHeart -- wherever you pod, and of course at MiamiHerald.com. You can find all 80 we've done HERE, for free. In our new epsisode, ESPN senior writer Seth Wickersham (pcitured) joins in to chat up his new book on the Patriots dynasty and how it ended. Also: Greg & Stugotz vs. Chris & Mike Ryan in Le Batard Show golf, the return of Mount Gregmore, Hard Knocks/Greg's Lobos episode 3, high-school prom stories, funereal times for Dolphins and Canes and more! Thanks as always for the support, pod family. Please listen, rate, review and follow. (Our pod simulcasts on Sirius XM every Monday 5-6 p.m. ET).

NFL Week 5 picks: Had a rough go last week but with one redeeming highlight: Our fourth straight bull's-eye for a perfect 4-0 mark on Upset of the Week picks. Now we turn to Week 5 and our picks for Dolphins-Bucs, Bills-Chiefs, Game of the Week, Upset of the Week and all the rest. Got off to a bad start Thursday night. Had home-'dog Seahawsk in an upset, but Rams took care of business. For all of our latest picks: NFL Week 5 Gems. 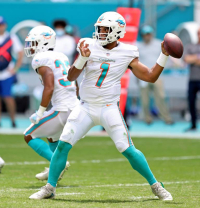 MUTE THE NOISE! WHY IT'S TOO SOON, AND DUMB, TO QUIT ON TUA AS DOLPHINS' ANSWER: There might be harder things to defend in sports at the moment. Kyrie Irving, for example, putting his selfish, irrational antivaccine stance above his Brooklyn Nets teammates and all of their fans. Or Jacksonville Jaguars coach Urban Meyer, in an Ohio bar fraternizing with a woman not his wife, almost as if he thought it wouldn’t explode into a viral video. Well, I am here today to defend Tua Tagovailoa. Unlike Irving and Meyer, who brought all of this on themselves, Tagovailoa’s apparent crime, if I understand it correctly, is that he is not Justin Herbert. This biological fact has many Miami Dolphins fans (and media) throwing a ton of shade on Tagovailoa — even though he has missed the past two games injured. That is because blame exists to be placed, and it needs to go somewhere with the Fins facing a 1-4 start as they stare into the double barrel of Tom Brady and his defending champion Bucs this Sunday at Tampa Bay. For our full latest column visit Why It's Way Too Soon, And Dumb, To Quit On Tua As Dolphins' Answer.

DOLPHINS, CANES' WOES MAKE IT YEAR OF RECKONING, WITH THESE 2 MEN MOST FIGHTING FOR THEIR FUTURES: A unexpected funereal air cloaks Miami football. The Dolphins, coming in buoyed off a 10-win season, stumble to a 1-3 start after a terrible home performance Sunday and stare at 1-4 with a visit to Tom Brady’s champion Tampa Bay Bucs on deck. The Hurricanes, ranked No. 14 in the preseason polls, stagger to a 2-3 start and face being an unthinkable 2-6, with their next three games as an underdog at North Carolina, home vs. a ranked North Carolina State and then at 4-1 Pitt. Lest we forget FIU, which is 1-4 and has now lost 11 of its past 12 games on coach Butch Davis’ increasingly tenuous watch. (The hot seat under Butch surely is such his trousers are smoldering. The upside: Nobody is paying much attention to FIU’s woes because of all the gnashing and hand-wringing over the Canes and Fins). When the sky is falling there is nowhere to run, and so this has quickly because a season of reckoning — and impatience — for our NFL franchise and two FBS-level college programs. Things will change, or somebody will pay. We will focus on the Dolphins and UM for this analysis that we will resist calling an autopsy. Both teams have enjoyed ever-distant glory days, setting the bar on expectations that both teams have spent most of the past 20 years failing to meet. The two fan bases are agitated, and should be. For our full recent column, visit Year Of Reckoning, And Impatience, For Slow-Starting Dolphins And Canes.

(*) OUR PICKS: OUCH. ROUGHEST WEEK YET: Went 9-7 overall and a wincing 6-10 against the spread -- despite rolling to 4-0 on the season on Upset of the Week picks with Seahawks winning in San Fran the latest. Also called Ravens' mini-upset win in Denver. Too many misfires though, including on Dolphins-Colts.

(*) GREG'S LOBOS: THIRD STRAIGHT WIN AND TIED FOR FIRST!: Lobos beat my brother Dick's Roughriders 113-102 for a third straight win and a tie for first at 3-1 in our famiy 'n friends PFPI Fantasy League. We placed seven starters in double-figure scoring led by 21 from game MVL Ezekiel Elliott.

Other most recent columns: Dolphins' Shutout Loss in Home Opener a New Low For Flores Era / Miami Hurricanes Aren't Very Good -- And Keep Proving It / The Big Question About Canes, Fins After Ugly Home Losses.Xavien Howard Deserved the Money and Respect He Wanted -- This Was Why / Canes' Offense Dangling Like a Cat And Needing Help / Tua's Burden as Dolphins Open at Pats? Lift a Team, a Franchise and a City. Now / Chasing Giants & Ghosts: Miami Hurricanes' 20-year search for return to glory / Miami Herald's 2021 NFL Team Rankings: You Won't Believe Where Dolphins are / Canes Can Shock the World and Beat Alabama. Here's How [Update: Oops!] / Belichick Must Be Smiling As Dolphins Deal With Rumors And Tua With Doubt / Fins' Faith In Tua Will Be A Lie If They Sell Soul, Spend Big For Watson / There Is Only One Way an ACC/Big Ten/Pac-12 Alliance Can Out-SEC the SEC / Time to Finally Start Believing in Tua, Flores and Miami Dolphins / Why Dolphins, Canes Should Be Taking Lead In Requiring Fans To Be COVID-Vaccinated / An Appreciation of Udonis Haslem As He Re-Ups For 19th Heat Season / Dolphins' 'Big Picture' Begins To Emerge With Unveiling Of Year 2ua / Unraveled: The Story Behind Who Aubrey Huff Became / and What Lionel Messi's Sudden, Stunning Move Means For Inter Miami