Canes at Pitt. Column coming:UM at Pittsburgh today for a noon kickoff. Watch for my column off the game online today soon after game edns (estimate 4 p.m.) and Sunday in print.

GREG COTE SHOW PODCAST: NEW EPISODE OUT NOW!: Our 41st episode of 2021 and 83rd overall is out now! New pod drops every Monday at 7 ET on Apple, Spotify, Google, Amazon, Stitcher, Megaphone, iHeart -- wherever you pod, and of course at MiamiHerald.com. You can find all 83 we've done HERE, free. In our new episode: Amin El Hassan (pictured) and Juju Gotti sit in with us as we discuss sports, bad acting and lots more. Also, Chris takes us around the world drinking, latest Hard Knocks/Greg's Lobos episode, Yeti debuts a new rap parody song, 'Breakfast Flan,' and more. Thanks as always for the support, pod family. Please listen, rate, review and follow. (Our pod simulcasts on Sirius XM every Monday 5-6 p.m. ET).

NFL WEEK 8 PICKS: DOLPHINS-BILLS, GAME OF WEEK, UPSETS AND ALL THE REST: We pivot to NFL Week 8 and our picks for Dolphins-Bills, our Game of the Week and Upset of the Week along with an additional upset and all the rest. Got off to a mixed start Thursday night. Lost the pick outright with Arizona losing but nailed it against the spread because we had Green Bay covering. For all of our latest picks: NFL Week 8 Gems. QUENNEVILLE OUT AS PANTHERS COACH -- DESERVEDLY -- OVER ROLE IN 2010 CHICAGO SCANDAL. NEW COLUMN: The past was rushing in on Joel Quenneville, and it was taking dead aim. It was coming hard enough that it looked like it might end his time with the Florida Panthers and his storied career in the National Hockey League. And that it should have. And now, it has. This controversy pointed Quenneville — second in all-time NHL coaching victories — to being fired by the Panthers, or allowed to resign. Or to an NHL suspension, or banishment. On Thursday night, at about 9:45, the Panthers announced he had resigned. He was given that courtesy, rather than being fired. Assistant coach Andrew Brunette will serve as the interim coach, a source told the Miami Herald. In any case the end was just. Quenneville, 11 years ago, took no action when a former player of his alleged a sexual assault by a member of his coaching staff. This was the biggest scandal involving a sitting head coach of a South Florida professional sports team. Thursday night the Panthers aimed to put it in the past by parting ways with their star coach. What engulfed Quenneville, 63, happened in Chicago in 2010 and had nothing to do, then, with the Florida Panthers. Oh, but it did now. Because Quenneville was the Panthers coach now, in his third season here. And the long-secret mess he was implicated in was interrupting Florida’s dream season with a bombshell nightmare. Fo our full latest column, visit Quenneville Rightly Sacked as Panthers Coach Over 2010 Chicago Scandal.

DOLPHINS SABOTAGING TUA, THIS SEASON WITH MISGUIDED INFATUATION OVER WATSON: Miami Dolphins owner Stephen Ross, in 2011, surreptitiously flew into San Francisco on his private jet to meet with and woo coach Jim Harbaugh. One problem: Ross already had a coach, Tony Sparano, under contract. Word got out, as secrets often do. The Fins got shafted by Harbaugh, who signed with the 49ers. An embarrassed, bitterly angry Sparano stayed. Ross, then a fairly new NFL owner, had to apologize. Ten years later, Ross’ Dolphins are engaging in the same kind of secretive-but-not-really display of classlessness — only this is far worse. Then, the targeted prize, Harbaugh, was a coveted free agent coach who had just led Stanford to an Orange Bowl win. All it took to get him was money. Now, the “prize” is Deshaun Watson. All it will take to get him is a ton of money, a future-crippling three first-round draft picks and more, and the hope he doesn’t end up in jail or serving a lengthy league suspension. Then, the victim of Ross’ dubious ethic was Sparano, a journeyman coach who’d had two straight losing seasons. Now, the victim is Tua Tagovailoa, the young quarterback of great, budding promise. The No. 5 overall pick in the 2020 Draft. A guy who in the past two games has completed 65 f 87 passes for 620 yards and six touchdowns — despite the surrounding megadistraction of his team’s blatant pursuit of Watson. What a [bleep]ing mess. A debacle. A national embarrassment. For our full recent column, visit Dolphins A National Embarrassment With Sabotaging Of Tua Over Infatuations With Watson. 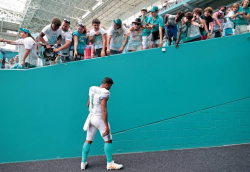 TOP 10 WAYS DOLPHINS' TUA TAGOVAILOA IS UNLUCKIEST MAN ON EARTH: When one Googles the phrase, “life is not fair,” a picture of Tua Tagovailoa should appear. His given first name is Tuanigamanuolepola. It must be Samoan for “cursed and luckless.” As his Miami Dolphins languish at 1-6 after six consecutive losses and reports swirl that the team already is shopping for his replacement, here are the 10 ways Tagovailoa is the unluckiest man on Earth. Or at least in the NFL. The collective weight of them is the boulder he drags, but we’ll rank, because people like a list. (Love the David Santiago photo here, by the way). For our full recent column including the Top 10 list, visit As Dolphins' Dysfunction Surrounds Him, 10 Ways Tua Is The Unluckiest Man On Earth.

Our other most recent columns:

Hurricanes: Canes, Embattled Diaz Show The Fight Left In Them.

(*) OUR PICKS: AWFUL ... AND REALLY GOOD: The awful: A 6-7 mark overall, sub-.500 straight-up an historical rarity for us. The really good: 8-4-1 against the spread. On four outright misses we correctly had the 'dogs covering: Dolphins, Titans, Colts and Seahawks. (The push/tie was Browns winning by 3).

(*) GREG'S LOBOS: ANOTHER WIN ... BUT BARELY: Lobos won 134-133 over my wife (uh oh) to make us 5-2 and tied for first place at the midpoint of the PFPI Fantasy regular season, our 10-team friends 'n family league. Got 36 from golden rookie Ja'Marr Chase, 31 from Mike Evans and 22 from Lamar Jackson. Also got lucky: Wife had Alvin Kamara Monday night, but his big 34 fell a couple shy of what she needed.

Select other recent columns: Tua Looks Good In Return, But Dolphins Lose 5th Straight / Canes, Trying to Save A Season And Maybe A Coach's Job, Fall Short in Chapel Hill / Dolphins Fans, Ex-Players Gather For Emotional Farewell to Don Shula, Father of the Glory Days / If Sports Had A Spine, Kyrie Irving & Other Anti-Vaxxers Wouldn't Be Playing / Kyle Lowry Must Channel 'Doctor Of Greatness' If Heat Is To Chase NBA Title / Fairy Tale With Wrong Ending: Remembering Jose Fernandez 5 Years Later / Loss In Tampa Has Dolphins Season In Free Fall As Embarrassments Pile Up / Why It's Too Soon, And Dumb, To Quit On Tua As Dolphins Answer / Year Of Reckoning, And Impatience, For Slow-Starting Dolphins & Canes / With Ghosts Of Glory Days Watching, Dolphins Showed Inept Effort in Third Straight Loss / Unlucky, But Heat on Manny Diaz Rises With Home Loss In ACC Opener / Tua's Rib Injury In Keeping With Weird, Rocky Start to Dolphins Career / Hope And Hype Are Sky-High. Time For Florida Panthers To Finally Deliver / Miami Herald's 2021 NFL Team Rankings: You Won't Believe Where Dolphins are / Why Dolphins, Canes Should Be Taking Lead In Requiring Fans To Be COVID-Vaccinated / An Appreciation of Udonis Haslem As He Re-Ups For 19th Heat Season / Unraveled: The Story Behind Who Aubrey Huff Became / College Football and FSU Lose a Treasure In Passing Of Bobby Bowden / Biggest Victory Of Hall Of Famer Jimmy Johnson's Life Was Getting His Son Back / Biles' Withdrawal For Mental-Health Reasons Merits Empathy, Not Scorn / Where Dolphins Rank Among Teams With Longest Championship Droughts / Dolphins Owner Ross Unveils New $135 Million Training Site As Another Reason Team Must Win Now / Hot Seat Scale: Ranking Miami's Biggest Coaches By Most to Least Job Security / May Sha'Carri Richardson Be Last Victim Of Olympics' Archaic Marijuana Rules / 'I'm D'Eriq King For College Hunks Hauling Junk!' It's Strange New World in College Sports / Nassib Coming Out As Gay NFL Player A Milestone In Sports History / Fate Snatched Basketball From Chris Bosh. His new Book Is Part of His Journey Of Healing / Where's Tua? Ranking Our Top 15 South Florida Pro Athletes 25 And Younger / Pythons, Peppers, Pirate Flag Raised. Inside Le Batard's 24-Hour Triumph / Le Batard Bet On Himself And His Audience -- And Won Big / Justice For George Floyd Helps Heal Our Shaken Faith, But Fight For Equality Goes On / What Would Jackie Robinson Think About Race In America Today? / In History And In Hearts, Howard Schnellenberger Will Matter For All Time / Women Keep Accusing Deshaun Watson of Sexual Misconduct. But Will It Matter to NFL Teams? / Reality, Loss, Comeback: How Sports Has Been Guiding Light In America's Awful Past Year / Beckham's Resolve Tested By Tumult As Inter Miami Nears 2nd MLS Season / Time-Travelling To 1960s And Childhood, When The Baseball Card Was King / Doesn't Matter If Tiger Woods Never Wins Again. We Are Lucky He's Alive / Final Herald NFL 2020 QB Rankings / Marlins Hit History-Making Home Run With Kim NG Hire As GM / In a Pandemic-Battered Season For FIU, Butch Davis' Love Of Coaching Survives / Don Shula, 1930-2020, R.I.P. / What Shula Meant to a Father & Son. The Boy Was Me.