GREG COTE SHOW PODCAST: TIME TO CATCH UP ON OUR WHOLE CATALOG!: Our 34th episode of 2021 and 76th overall is out now! A new pod drops every Monday at 7 ET on Apple, Spotify, Google, Amazon, Stitcher, Megaphone, iHeart -- wherever you pod, and of course at MiamiHerald.com. You can find all 76 we've done HERE, for free. In our most recent episode: Join the Cote family and friends and hear all the fun banter during the PFPI Fantasy Draft featuring Greg's Lobos, and emceed by Greg, followed by a Paella Party. You'll feel like you're there! Also: Greg discusses the Dolphins, and we debut a new song about Greg's Lobos. No new episode this week because we were on vacation. Perfect time to catch up with our whole catalog. Watch for a new episode out September 13! Thanks as always for the support, pod family. Please listen, rate, review and follow. (Our pod simulcasts on Sirius XM every Monday 5-6 p.m. ET on Channel 145).

NFL Week 1 picks: The Upset Bird and I are back for (hard to believe) our 31st season of NFL picks in the Miami Herald. It's debut week! Visit NFL Week 1 Gems for our pick for Dolphins-Patriots, our Game of the Week, Upset of the Week and all the rest. We peg three big upsets out the gate. Is a Fins win one of them? Got off to a mixed start last week, had Patriots beating Dallas and covering 8 points. They won but failed to cover.

THE BURDEN ON TUA AS DOLPHINS OPEN AT PATRIOTS? LIFT A TEAM, A FRANCHISE, A CITY. NOW: With the Miami Dolphins’ season opener at New England on Sunday we begin to step into an AFC East we haven’t seen since 1985. No current Dolphins player was alive then. Coach Brian Flores was a 4-year-old toddling around Brooklyn. This year, 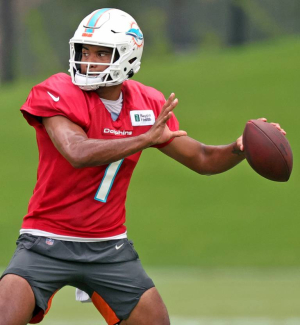 for the first time since then, four starting quarterbacks in one division are under the age of 26 to open a season, with the Fins’ Tua Tagovailoa at 23 and Pats rookie Mac Jones also 23, along with the Buffalo Bills’ Josh Allen at 25 and New York Jets rookie Zach Wilson at 22. Last time four starting QBs were under 26 in any NFL division in Week 1 was the AFC East in ‘85. Then it was some 23-year-old guy named Dan Marino in Miami, along with the Pats’ Tony Eason at 25, Jets’ Ken O’Brien at 24 and Colts’ Art Schlichter at 25. (Some divisions including Miami’s were five teams then, before realignment. The Bills’ starter that year, Vince Ferragamo, was 31). This is notable now in a way it wasn’t then because, now, passing rules the NFL. The quarterback is king. And as if we required more evidence, Tom Brady and Dak Prescott on Thursday night combined to complete 74 of 108 passes for 782 yards and seven touchdowns. The running backs were hood ornaments, largely unnecessary. My point in all of this? For Miami to become a power in its division and ultimately a championship contender, Tagovailoa must prove good enough to be as good or better than Allen, Jones and Wilson. Six of 17 games each season (35 percent) will be head-to-head against his instant rivals. And it could be thus for the next 10-plus years. Tagovailoa must prove that, on the franchise-steering night of April 23, 2020, the Dolphins made the right choice in drafting him fifth overall — one spot ahead of the Chargers selecting Justin Herbert. The proving starts late Sunday afternoon in Foxborough, Massachusetts. And the proof must come in 2021, and it must be unequivocal. For our full latest column, visit: Tua's Burden as Dolphins Open at Pats? Lift a Team, a Franchise and a City. Now.

Other most recent columns: Canes Can Shock the World and Beat Alabama. Here's How [Update: Oops!] / Belichick Must Be Smiling As Dolphins Deal With Rumors And Tua With Doubt / and Fins' Faith In Tua Will Be A Lie If They Sell Soul, Spend Big For Watson. Also: There Is Only One Way an ACC/Big Ten/Pac-12 Alliance Can Out-SEC the SEC / Time to Finally Start Believing in Tua, Flores and Miami Dolphins / Why Dolphins, Canes Should Be Taking Lead In Requiring Fans To Be COVID-Vaccinated / An Appreciation of Udonis Haslem As He Re-Ups For 19th Heat Season / Dolphins' 'Big Picture' Begins To Emerge With Unveiling Of Year 2ua / Unraveled: The Story Behind Who Aubrey Huff Became / and What Lionel Messi's Sudden, Stunning Move Means For Inter Miami

WE'RE BACK FROM OUR WONDERFUL BUT SPECTACULARLY ILL-TIMED VACATION: I say ill-timed because I missed the Canes-Alabama season opener in Atlanta. Then again (caught a bit of the game and saw the final score), what did I really miss except the usual not-there-yet agony? Missed that to spend five recent days funning at various Disney parks in Orlando with my wife, son Christopher, his wife and 3 1/2-year-old daughter, and son Michael and his girlfriend. The seven of us all stayed at the Animal Kingdom hotel, where giraffes, zebra and myriad other animals roamed in our backyard. It was terrific fun. Seeing the joy in my granddaughter's face throughout was the best of it. Although the "Pandora: The World Of Avatar" ride was a close second. It was awesome! So was Space Mountain, but in the terrifying category. Here is the phenomenon of Disney: It's really expensive. It's really, really hot. On a typical day you wait about three hours in lines for about 25 minutes of actual rides. And you love it! We did, anyway. My wife and I hadn't been in about 20 years, and it was fun to go back. Also happy to be home now and back to work. I'll be at the Dolphins' season opener in New England on Sunday.

PODCAST AND LE BATARD SHOW UPDATES: Because of vacation we did not have a new Greg Cote Show podcast out Monday as usual this week. We'll be back with a new one on September 13. Meantime here is the entire 76-pod catalog so you can listen to our most recent episode, any you may have missed, or relive old favorites. I also expect to be back on the Le Batard Show September 14 in my regular Tuesday slot.

Select other columns: Exhibition Losses Give Team USA Wakeup Call It Needs Headed to Olympics / Better 2 Years Late Than Never, Panthers Get 2023 NHL All-Star Weekend / Fate Snatched Basketball From Chris Bosh. His new Book Is Part of His Journey Of Healing / Here's What Else Must Go Right (Besides Tua) For Dolphins To Continue Momentum / Where's Tua? Ranking Our Top 15 South Florida Pro Athletes 25 And Younger / As Teams Like Miami Pray For Right QB, Packers' Disrespect Of Rodgers Is Galling / Messi-to-Miami Is Shot of Hope David Beckham's Troubled Soccer Club Needs / Miami Heat, With No Answers, Put Out of Misery In Game 4 Loss To Milwaukee / Another Early Panthers Playoff Exit Ends An Encouraging Season Too Soon / Pythons, Peppers, Pirate Flag Raised. Inside Le Batard's 24-Hour Triumph / The Curious, Complicated Drama Of Naomi Osaka's French Open Withdrawal / Hall of Fame Snubbed Chris Bosh Last year. Time To Make it Right / Aging Ex-Dolphins Reflect On Own Mortality One Year After Shula's Death / Aaron Rodgers' Packers Drama Involves Miami (Of Course). But Here's Why It Won't Happen / Grade-A Draft Feeds Momentum For Team-On-the-Rise Dolphins / Le Batard Bet On Himself And His Audience -- And Won Big / Justice For George Floyd Helps Heal Our Shaken Faith, But Fight For Equality Goes On / What Would Jackie Robinson Think About Race In America Today? / It Won't Fix the World, But Matsuyama's Masters Win Lifts Japan In Time Of Anti-Asian Hate / Even After Playoffs In '20, Marlins Still 'Bottom Feeders' Fighting For Respect / Special Opening Day as Marlins Welcome Back Fans, Feeling Of Hope / In History And In Hearts, Howard Schnellenberger Will Matter For All Time / Beckham Keeps Name-Dropping Messi, Ronaldo For Inter Miami. Can He Deliver? / Women Keep Accusing Deshaun Watson of Sexual Misconduct. But Will It Matter to NFL Teams? / Phil Reflects on 25-Year Rivalry/Friendship With Tiger As Honda Classic Tees Off / Reality, Loss, Comeback: How Sports Has Been Guiding Light In America's Awful Past Year / Heat Should Parts Ways With Meyers Leonard Over Anti-Semitic Slur / Beckham's Resolve Tested By Tumult As Inter Miami Nears 2nd MLS Season / Time-Travelling To 1960s And Childhood, When The Baseball Card Was King / Quit Lecturing LeBron On Activism And His Own Conscience / Michael Jordan, Pitbull Signal Needed New Era as NASCAR Returns to Homestead / Doesn't Matter If Tiger Woods Never Wins Again. We Are Lucky He's Alive / Loss at Aussie Open Leaves Serena's Legacy Firm Yet Still Unfinished / Inter Miami's Beckham Risks Stepping Into Massive, Avoidable Mess / Put Brady In Sports' All-Time Pantheon. But He Has Company / Final Herald NFL 2020 QB Rankings / Marlins Hit History-Making Home Run With Kim NG Hire As GM / In a Pandemic-Battered Season For FIU, Butch Davis' Love Of Coaching Survives / Don Shula, 1930-2020, R.I.P. / and What Shula Meant to a Father & Son. The Boy Was Me.