Jimmy Johnson X 2: Podcast and column: You'll want to listen and read as we feature the only man to be head coach the Hurricanes and Dolphins on the week of his enshrinement into the Pro Football Hall of fame on Saturday. You'll hear plenty in the podcast that isn't in the column, including Jimmy's appraisal of today's Canes and Fins. And you'll read lots in the column that isn't in the podcast -- including Jimmy on the struggles of one of his sons, and an interview with Chad Johnson, the son whose triumph over some 20 years of alcoholism helped repair a family and make this the happiest time of Jimmy's life.

GREG COTE SHOW PODCAST: NEW EPISODE WITH JIMMY JOHNSON OUT NOW!: Our 30th episode of 2021 and 72nd overall is out now! A new pod drops every Monday at 7 a.m. ET on Apple, Spotify, Google, Amazon, Stitcher, Megaphone, iHeart -- wherever you pod, and of course at MiamiHerald.com. You can find all 72 we've done so far HERE, for free. In our newest episode: The great former coach Jimmy Johnson, on the week of his enshrinement into the Pro Footballl Hall of Fame, joins us for a fun, candid and at times poignant reflection on his passions: Football, family, fishing and Fox. We also ask J.J. for an appraisal of Manny Diaz and the Canes and Brian Flores and the Dolphins. Also in the new ep: Greg, Chris and Yeti discuss the small details of any marriage or relationship. Also: Simone BIles, MLB trade deadline and NBA free agency and the Heat. Thanks as always for the support, pod family. Please listen, rate, review and follow! (Our pod simulcasts on Sirius XM, too, every Monday 5-6 p.m. ET on Channel 145).

HALL OF FAMER JIMMY JOHNSON KNOWS BIGGEST VICTORY OF HIS LIFE HAPPENED IN HIS OWN FAMILY: He is up in the dark at 4:30 most mornings. By sunrise he is aboard his 39-foot SeaVee, “Three Rings,” named for his national championship with the Miami Hurricanes and two Super Bowl wins with the Dallas Cowboys. Jimmy Johnson is 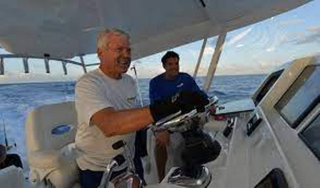 usually alone. “If I’m out there by myself there’s no pressure to catch any fish,” he says, smiling. “If I entertain people I feel kind of obligated to catch a big fish for ‘em.” He fires up the diesel engines and heads maybe 25 miles offshore as the sun is chasing the dark away. Before long he will have five active lines out in search of mahi (“What they call dolphin down here”), tuna, maybe amberjack or wahoo — “Whatever gets on the hook,” he says. Jimmy’s fishing bona fides are for real. He has caught and released five huge blue marlin in the 300-pound range, some after near two-hour struggles. He hosts the annual J.J.’s Championship Fishing Week that has included Michael Jordan among anglers. His house includes a separate room full of offshore-grade rods and reels and plastic boxes full of lures and hand-tied rigs. He cleans and vacuum-seals his own fish. (Doesn’t cook ‘em, though. His wife Rhonda handles that).But Johnson’s passion for fishing isn’t just about what he catches. He is out there fishing for more than that. “It’s peaceful out there,” he says. “It’s relaxation.” It gives a man time to think. He just turned 78. It can be an age that invites reflection. Johnson reaches the pinnacle of his professional life this coming weekend: the Pro Football Hall of Fame in Canton, Ohio. The enshrinement ceremony for the Class of 2020, delayed to this summer by the pandemic, is on Saturday. More important, this feels to Johnson like the best his life has been, period, above and beyond sports or the fame he achieved in football or for the past 20 years as a studio analyst on “FOX NFL Sunday.” “I used to say the most fun time of my life was was those five years at the University if Miami. It was that way for a long time,” he says. “Winning back-to-back Super Bowls was rewarding as well. But, really, the greatest time of my life is now. The most fun time of my life has been right now.” It wasn’t football that got him to this place. It wasn’t fishing, or Fox TV. It was family. Johnson in reflection knows it was at great cost he achieved all he did in football. A divorce. Missing so much of his two sons growing up. Being far away, in headsets on sidelines, as his parents aged and passed away. Even the most successful people can feel tinges of guilt or regret. For our full latest column, visit Biggest Victory Of Hall Of Famer Jimmy Johnson's Life Was Getting His Son Back. Pictured: Jimmy out fishing with his son Chad.
Jimmy Johnson is one of four men with strong South Florida ties to be inducted Saturday into Pro Football Hall of Fame. On Edgerrin James (pictured in middle), Isaac Bruce and Steve Hutchinson:

Other recent columns: Where Dolphins Rank Among Teams With Longest Championship Droughts / Dolphins Owner Ross Unveils New $135 Million Training Site As Another Reason Team Must Win Now / It's Selfish, Me-First Athletes Who Are Refusing the COVID Vaccine / Hot Seat Scale: Ranking Miami's Biggest Coaches By Most to Least Job Security / Peril vs. Possibility: Should the Heat Gamble and Try to Fix Ben Simmons? / Tokyo Olympics Should Be Delayed Again But It's Too Late. Why? Money / May Sha'Carri Richardson Be Last Victim Of Olympics' Archaic Marijuana Rules / 'I'm D'Eriq King For College Hunks Hauling Junk!' It's Strange New World in College Sports / Time For Sports To Quit Hiding, Stand Up And Lead The Pro-Vaccine Fight / and Nassib Coming Out As Gay NFL Player A Milestone In Sports History.

Select other (fairly) recent columns: Exhibition Losses Give Team USA Wakeup Call It Needs Headed to Olympics / Injury-Wrecked Playoffs, Asterisk Champion: Why Greedy NBA Is Getting What It Deserves / Better 2 Years Late Than Never, Panthers Get 2023 NHL All-Star Weekend / Fate Snatched Basketball From Chris Bosh. His new Book Is Part of His Journey Of Healing / Here's What Else Must Go Right (Besides Tua) For Dolphins To Continue Momentum / Rumors, Speculation and the Truth on Spoelstra, Lillard and Heat / Wanted: A 'Next Big Thing' In Men's Tennis, Golf / Where's Tua? Ranking Our Top 15 South Florida Pro Athletes 25 And Younger / As Teams Like Miami Pray For Right QB, Packers' Disrespect Of Rodgers Is Galling / Messi-to-Miami Is Shot of Hope David Beckham's Troubled Soccer Club Needs / Miami Heat, With No Answers, Put Out of Misery In Game 4 Loss To Milwaukee / Another Early Panthers Playoff Exit Ends An Encouraging Season Too Soon / Pythons, Peppers, Pirate Flag Raised. Inside Le Batard's 24-Hour Triumph / The Curious, Complicated Drama Of Naomi Osaka's French Open Withdrawal / Hall of Fame Snubbed Chris Bosh Last year. Time To Make it Right / Aging Ex-Dolphins Reflect On Own Mortality One Year After Shula's Death / Aaron Rodgers' Packers Drama Involves Miami (Of Course). But Here's Why It Won't Happen / Grade-A Draft Feeds Momentum For Team-On-the-Rise Dolphins /  Le Batard Bet On Himself And His Audience -- And Won Big / Justice For George Floyd Helps Heal Our Shaken Faith, But Fight For Equality Goes On / What Would Jackie Robinson Think About Race In America Today? /  It Won't Fix the World, But Matsuyama's Masters Win Lifts Japan In Time Of Anti-Asian Hate / Talk Of U.S. Olympic Boycott A Reminder Sports, Politics Are Entwined -- And That's Good / How And Why the Miami Heat Landing Kawhi Leonard This Summer Could Happen / Even After Playoffs In '20, Marlins Still 'Bottom Feeders' Fighting For Respect / Special Opening Day as Marlins Welcome Back Fans, Feeling Of Hope / In History And In Hearts, Howard Schnellenberger Will Matter For All Time / Beckham Keeps Name-Dropping Messi, Ronaldo For Inter Miami. Can He Deliver? / Women Keep Accusing Deshaun Watson of Sexual Misconduct. But Will It Matter to NFL Teams? / Phil Reflects on 25-Year Rivalry/Friendship With Tiger As Honda Classic Tees Off / Reality, Loss, Comeback: How Sports Has Been Guiding Light In America's Awful Past Year / Heat Should Parts Ways With Meyers Leonard Over Anti-Semitic Slur / Beckham's Resolve Tested By Tumult As Inter Miami Nears 2nd MLS Season / Time-Travelling To 1960s And Childhood, When The Baseball Card Was King / Quit Lecturing LeBron On Activism And His Own Conscience / Michael Jordan, Pitbull Signal Needed New Era as NASCAR Returns to Homestead / Doesn't Matter If Tiger Woods Never Wins Again. We Are Lucky He's Alive / Loss at Aussie Open Leaves Serena's Legacy Firm Yet Still Unfinished /  Inter Miami's Beckham Risks Stepping Into Massive, Avoidable Mess / Put Brady In Sports' All-Time Pantheon. But He Has Company / Final Herald NFL 2020 QB Rankings / Marlins Hit History-Making Home Run With Kim NG Hire As GM / In a Pandemic-Battered Season For FIU, Butch Davis' Love Of Coaching Survives / Don Shula, 1930-2020, R.I.P. / and What Shula Meant to a Father & Son. The Boy Was Me.