GREG COTE SHOW PODCAST: NEW EPISODE OUT NOW: SURFSIDE STORIES, IZZY ON NASSIB: Our 25th episode of 2021 and 67th overall is out now! A new pod drops every Monday at 7 a.m. ET on Apple, Spotify, Google, Amazon, Stitcher, Megaphone, iHeart -- wherever you pod, and of course at MiamiHerald.com. You can find all 67 we've done so far HERE, for free. In our latest episode Greg and veteran TV reporter Ari Odzer of WTVJ-NBC6 discuss the Surfside tragedy, and Ari shares stories from victims' families. And ESPN's Izzy Gutierrez stops by the pod to discuss the significance of the Raiders' Carl Nassib becoming the NFL's first openly gay active player. Iz also talks NBA playoffs, and scoffs at a Ben Smmons-to-Miami rumor that Chris tries to float. Thanks as always for the support, pod family. Please listen, rate, review and follow! (Our pod simulcasts on Sirius XM, too, every Monday 5-6 p.m. ET on Channel 145). 'I'M D'ERIQ KING FOR COLLEGE HUNKS HAULING JUNK!' IT'S A STRANGE NEW WORLD IN COLLEGE SPORTS: All of that ... for this!? Must admit that was our gut reaction on Thursday when quarterback D’Eriq King made history of sorts by being the first Miami Hurricanes athlete to take advantage of new NCAA laws that allow college players to make money off their name, image and likeness. The NCAA had resisted the progressive NIL law for years but finally gave in after several states including Florida enacted or threatened their own legislation. After such a long fight and buildup one imagined what the first deal struck by an athlete might be. Not that we were envisioning a multimillion dollar deal with Gatorade or Nike for King, but somehow neither were we imagining local deals with a pair of Tampa-based businesses: the moving company College Hunks Hauling Junk, and Murphy Auto Group. So will King soon be cocking his arm to pass on the side of a moving van? Or in a TV ad hawking used Buicks? (ESPN reported UM safety Bubba Bolden also has a deal with the companies). Hey, does not the road to riches always begin with one small step? The two deals combined reportedly are worth a bit more than $20,000. If that’s what the quality starting quarterback is getting, we imagine the backup long snapper is presently negotiating a deal with Al’s Bike Shop for 20 bucks a week and three hours a week of a Schwinn loaner. (A backup on the Canes women’s rowing team, unable to secure an endorsement deal, has opened up a boutique lemonade stand outside her dorm). For our full latest column: 'I'm D'Eriq King For College Hunks Hauling Junk!' It's Strange New World in College Sports.

ASTERISK CHAMPION AFTER INJURY-WRECKED PLAYOFFS: WHY GREEDY NBA GETTING WHAT IT DESERVES: There was an excuse for the farcical nature of the NBA playoffs a year ago, at least. It was called a global pandemic. The league removed travel from the delayed, shortened season, threw every playoff team into a bubble in Orlando and hoped for the best. Virtual fans and cardboard cutouts cheered as the Lakers and Heat floated through the bubble to the Finals, L.A. winning in six. It felt like a mirage. Wait. Did that really just happen? The trophy should have been in the shape of a giant asterisk. A year later, right now, it’s worse. A bigger farce. A nationally televised embarrassment. This is what happens, when — hell-bent to recoup revenue COVID stole — the NBA plows ahead with a near full (72-game) season, with travel, despite a short offseason and not enough rest and recovery time. Players predictably break down. Injuries steer the season. And you get a playoffs like this. Foe our full recent column: Injury-Wrecked Playoffs, Asterisk Champion: Why Greedy NBA Is Getting What It Deserves.

EXCLUSIVE: BETTER TWO YEARS LATE THAN NEVER, PANTHERS WILL HOST 2023 NHL ALL-STAR WEEKEND: It seemed like a thief in the night, except in broad daylight. They came in a stole it with everybody watching. Nobody saw a thing. One moment the Florida Panthers and South Florida had the 2022 NHL All-Star Weekend ... and then it was gone. The league this week quietly announced its ‘22 signature midseason party would be held in Las Vegas. Wait. What. No explanation was given. Florida was supposed to host this season’s 2021 all-star show, but that was canceled due to the COVID-related shortened schedule. So first the Cats get punched by the pandemic. Now they get punched by the NHL’s infatuation with being in Vegas and all things Vegas? Not fair, right? I was getting ready to file a police report. “Hullo, 9-1-1? Someone stole my All-Star Weekend.” But wait. Turns out it’s OK. Florida will host the 2023 NHL All-Star Weekend festivities instead, a source with the city of Fort Lauderdale told me Wednesday. [Panthers president/CEO Matthew Caldwell is pictured]. It isn't often news is broken in a column, but we did it here. For our full recent column: Better 2 Years Late Than Never, Panthers Get 2023 NHL All-Star Weekend. 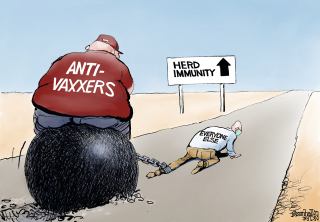 TELL COLE BEASLEY HE'S WRONG. TIME FOR SPORTS TO QUIT HIDING AND LEAD PRO-VACCINE FIGHT: Centers for Disease Control director Dr. Rochelle Walensky said adult deaths from COVID-19 have become “entirely preventable” due to the effectiveness of vaccinations. A study of government data by The Associated Press reported that, since May, 99.2 percent of all COVID-

related deaths have been unvaccinated people. Curious what Cole Beasley’s reaction to that might be. Fake news? I wonder the mind-set of anyone still holding out against the vaccine — which is readily available, quick and free — despite science, evidence and logic begging that we all please come together as Americans on this, at least. COVID has killed more than 600,000 in the United States thus far, the cure is there, and yet fewer than half of us — 46.6 percent — have been fully vaccinated. Beasley, the Buffalo Bills’ wide receiver, dubiously volunteered himself as the face of anti-vax nation last week, defiantly saying he will ignore new NFL protocols that afford freedoms to vaccinated players and restrictions for those unvaccinated. He is daring the league to fine him. Saying he would rather retire than get vaccinated. He declared on social media. “I will be outside doing what I do. I may die of COVID, but I’d rather die actually living.” (Or: You could get the vaccine and live actually not dying?) Instead, it’s all about you, right? Don’t worry about sending a terrible message to fans. Don’t concern yourself with your teammates. Ignore that 99.2 percent of COVID deaths are now unvaccinated folks. Just go ahead and make this all about you and your personal freedom. (And be blithely tone-deaf to how spectacularly selfish this makes you seem). Beasley out front on this crusade underlines the idea that sports in general have not done nearly enough to push a pro-vaccine agenda. Leagues, teams and star players need to do much more to support this pro-science, pro-health cause in the same way they have been on the right side of social and racial justice issues. For our full recent column: Time For Sports To Quit Hiding, Stand Up And Lead The Pro-Vaccine Fight.

Our most recent other columns: Nassib Coming Out As Gay NFL Player A Milestone In Sports History / Fate Snatched Basketball From Chris Bosh. His new Book Is Part of His Journey Of Healing / Here's What Else Must Go Right (Besides Tua) For Dolphins To Continue Momentum / Also:  Rumors, Speculation and the Truth on Spoelstra, Lillard and Heat / and Wanted: A 'Next Big Thing' In Men's Tennis, Golf.

Select other recent columns: Where's Tua? Ranking Our Top 15 South Florida Pro Athletes 25 And Younger / As Teams Like Miami Pray For Right QB, Packers' Disrespect Of Rodgers Is Galling / Messi-to-Miami Is Shot of Hope David Beckham's Troubled Soccer Club Needs / Miami Heat, With No Answers, Put Out of Misery In Game 4 Loss To Milwaukee / Another Early Panthers Playoff Exit Ends An Encouraging Season Too Soon / Pythons, Peppers, Pirate Flag Raised. Inside Le Batard's 24-Hour Triumph / The Curious, Complicated Drama Of Naomi Osaka's French Open Withdrawal / Hall of Fame Snubbed Chris Bosh Last year. Time To Make it Right / Aging Ex-Dolphins Reflect On Own Mortality One Year After Shula's Death / Aaron Rodgers' Packers Drama Involves Miami (Of Course). But Here's Why It Won't Happen / Grade-A Draft Feeds Momentum For Team-On-the-Rise Dolphins /  Le Batard Bet On Himself And His Audience -- And Won Big / Justice For George Floyd Helps Heal Our Shaken Faith, But Fight For Equality Goes On / What Would Jackie Robinson Think About Race In America Today? /  It Won't Fix the World, But Matsuyama's Masters Win Lifts Japan In Time Of Anti-Asian Hate / Talk Of U.S. Olympic Boycott A Reminder Sports, Politics Are Entwined -- And That's Good / How And Why the Miami Heat Landing Kawhi Leonard This Summer Could Happen / Even After Playoffs In '20, Marlins Still 'Bottom Feeders' Fighting For Respect / Special Opening Day as Marlins Welcome Back Fans, Feeling Of Hope / In History And In Hearts, Howard Schnellenberger Will Matter For All Time / Beckham Keeps Name-Dropping Messi, Ronaldo For Inter Miami. Can He Deliver? / Women Keep Accusing Deshaun Watson of Sexual Misconduct. But Will It Matter to NFL Teams? / Phil Reflects on 25-Year Rivalry/Friendship With Tiger As Honda Classic Tees Off / Reality, Loss, Comeback: How Sports Has Been Guiding Light In America's Awful Past Year / Heat Should Parts Ways With Meyers Leonard Over Anti-Semitic Slur / Beckham's Resolve Tested By Tumult As Inter Miami Nears 2nd MLS Season / Time-Travelling To 1960s And Childhood, When The Baseball Card Was King / Quit Lecturing LeBron On Activism And His Own Conscience / Michael Jordan, Pitbull Signal Needed New Era as NASCAR Returns to Homestead / Doesn't Matter If Tiger Woods Never Wins Again. We Are Lucky He's Alive / Loss at Aussie Open Leaves Serena's Legacy Firm Yet Still Unfinished /  Inter Miami's Beckham Risks Stepping Into Massive, Avoidable Mess / Put Brady In Sports' All-Time Pantheon. But He Has Company / Final Herald NFL 2020 QB Rankings / Marlins Hit History-Making Home Run With Kim NG Hire As GM / In a Pandemic-Battered Season For FIU, Butch Davis' Love Of Coaching Survives / Don Shula, 1930-2020, R.I.P. / and What Shula Meant to a Father & Son. The Boy Was Me.