Bosh X Bosh: A Special Note: Our latest Greg Cote Show podcast welcomes in Chris Bosh as a special guest, and we have a companion column on Bosh. Both came out Monday. The podcast contains stuff not in the column, and vice versa, so please listen/read both for the full tale as we catch up with Bosh five years after blood clots abruptly ended his NBA career. His new book, "Letters to a Young Athlete," has been a part of his healing process as he moves on from the loss of his love and livelihood, basketball.

GREG COTE SHOW PODCAST: LATEST EPISODE WITH CHRIS BOSH OUT NOW!: Our 24th episode of 2021 and 66th overall is out now! A new pod drops every Monday at 7 a.m. ET on Apple, Spotify, Google, Amazon, Stitcher, Megaphone, iHeart -- wherever you pod, and of course at MiamiHerald.com. You can find all 66 we've done so far HERE for free. Our latest episode features special guest Chris Bosh, Basketball Hall of Famer and former Heat star, discussing his new book, the Big 3 era, how basketball ended for him, and finding peace. Also: Victoria's Secret, Vincent Van Gogh, Cole Beasley and a new Mount Gregomre. Thanks as always for the support, pod family. Please listen, rate, review and follow! (Our pod now simulcasts on Sirius XM, too, every Monday 5-6 p.m. ET on Channel 145). 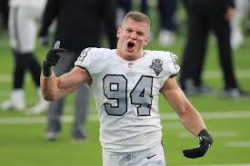 WHY NFL'S CARL NASSIB IS SPORTS' MOST SIGNIFICANT 'FIRST' SINCE JACIE ROBINSON IN 1947: Carl Nassib is the new Jackie Robinson. We shall see over time if that statement proves to be hyperbole, but in the moment this week, it felt that big — that much a landmark. And it felt that necessary. That overdue. It was a matter of time, but the when and the who are always a mystery until they are not. Until somebody is first. In 1947 it was Robinson breaking baseball’s color line. In 2021 it was Carl Nassib, a heretofore little-known professional football player, standing up in America’s biggest sport as the first openly gay player. Outside of Las Vegas Raiders fans few had probably even heard of the defensive end before this week. Now the No. 94 jersey with Nassib’s name across the back is the hottest seller in the entire league, nationwide, bigger than all of the superstar quarterbacks who typically top the list. I remember getting into a big argument once with a friend who tried to make the case that Jackie Robinson was historically overrated, given too much credit as a trailblazer. The oddball logic: That if he wasn’t first, somebody else would have been. No! Someone has to be first. Someone has to be brave, and see themselves as bigger and more important than just a guy who plays sports for living. In this case, someone had to step forward and volunteer himself as an example of hope and inclusion and possibility for anyone in the LGBTQ+ community looking for their own truth. Especially young people who can feel so lost, so isolated. For our full latest column please visit Nassib Coming Out As Gay NFL Player A Milestone In Sports History. 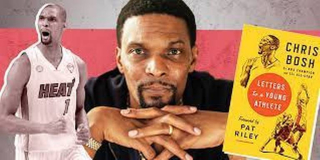 BLOOD CLOTS SNATCHED BASKETBALL FROM CHRIS BOSH. HIS NEW BOOK IS A PART OF THE HEALING: Chris Bosh needed more than two years to find anything close to inner peace with how his love and livelihood — basketball —- was so suddenly snatched from him in 2016. He was in his prime and peak of fitness with the Miami Heat when the blood clots were first detected. He was an 11-time NBA All-Star far from finished, he thought, with a career that would lead to the Heat retiring his No. 1 jersey and his induction this spring into the Naismith Memorial Basketball Hall of Fame. But then he was done. In an instant. “It was tough to get over it. Extremely tough,” he told said in a conversation for The Greg Cote Show podcast, released Monday. “It took years. Two years and change to move on. I felt cheated, slighted, like the world was against me, ‘Why me?’ I felt those emotions. I felt ‘em all. Let me not beat around the bush. I thought winning a championship was the hardest thing I ever did in my life. No. Not playing basketball and just yanking the plug out — that was the hardest thing by far.” Bosh couldn’t, wouldn’t, let go at first. Spent months trying to get back on the court, seeing specialists. “I felt that team was good enough to compete for a championship [in 2017]. I was so excited. I felt if we can have success without Bron [LeBron James], oooh that’ll do so much for my career. So we didn’t leave a stone unturned [trying to play again]. We tried until I got tired of it. I had to move on.” For our full recent column, please visit: Fate Snatched Basketball From Chris Bosh. His new Book Is Part of His Journey Of Healing.

Our other most recent columns: Here's What Else Must Go Right (Besides Tua) For Dolphins To Continue Momentum / Rumors, Speculation and the Truth on Spoelstra, Lillard and Heat / and Wanted: A 'Next Big Thing' In Men's Tennis, Golf. Also: Where's Tua? Ranking Our Top 15 South Florida Pro Athletes 25 And Younger / As Teams Like Miami Pray For Right QB, Packers' Disrespect Of Rodgers Is Galling / and Messi-to-Miami Is Shot of Hope David Beckham's Troubled Soccer Club Needs.

Select other recent columns: Miami Heat, With No Answers, Put Out of Misery In Game 4 Loss To Milwaukee / Another Early Panthers Playoff Exit Ends An Encouraging Season Too Soon / Pythons, Peppers, Pirate Flag Raised. Inside Le Batard's 24-Hour Triumph / The Curious, Complicated Drama Of Naomi Osaka's French Open Withdrawal / Hall of Fame Snubbed Chris Bosh Last year. Time To Make it Right / Aging Ex-Dolphins Reflect On Own Mortality One Year After Shula's Death / Aaron Rodgers' Packers Drama Involves Miami (Of Course). But Here's Why It Won't Happen / Grade-A Draft Feeds Momentum For Team-On-the-Rise Dolphins /  Le Batard Bet On Himself And His Audience -- And Won Big / Justice For George Floyd Helps Heal Our Shaken Faith, But Fight For Equality Goes On / What Would Jackie Robinson Think About Race In America Today? /  It Won't Fix the World, But Matsuyama's Masters Win Lifts Japan In Time Of Anti-Asian Hate / Talk Of U.S. Olympic Boycott A Reminder Sports, Politics Are Entwined -- And That's Good / How And Why the Miami Heat Landing Kawhi Leonard This Summer Could Happen / Even After Playoffs In '20, Marlins Still 'Bottom Feeders' Fighting For Respect / Special Opening Day as Marlins Welcome Back Fans, Feeling Of Hope / In History And In Hearts, Howard Schnellenberger Will Matter For All Time / Beckham Keeps Name-Dropping Messi, Ronaldo For Inter Miami. Can He Deliver? / Women Keep Accusing Deshaun Watson of Sexual Misconduct. But Will It Matter to NFL Teams? / Phil Reflects on 25-Year Rivalry/Friendship With Tiger As Honda Classic Tees Off / Reality, Loss, Comeback: How Sports Has Been Guiding Light In America's Awful Past Year / Heat Should Parts Ways With Meyers Leonard Over Anti-Semitic Slur / Beckham's Resolve Tested By Tumult As Inter Miami Nears 2nd MLS Season / Time-Travelling To 1960s And Childhood, When The Baseball Card Was King / Quit Lecturing LeBron On Activism And His Own Conscience / Michael Jordan, Pitbull Signal Needed New Era as NASCAR Returns to Homestead / Doesn't Matter If Tiger Woods Never Wins Again. We Are Lucky He's Alive / Loss at Aussie Open Leaves Serena's Legacy Firm Yet Still Unfinished /  Inter Miami's Beckham Risks Stepping Into Massive, Avoidable Mess / Put Brady In Sports' All-Time Pantheon. But He Has Company / Final Herald NFL 2020 QB Rankings / Marlins Hit History-Making Home Run With Kim NG Hire As GM / In a Pandemic-Battered Season For FIU, Butch Davis' Love Of Coaching Survives / Don Shula, 1930-2020, R.I.P. / and What Shula Meant to a Father & Son. The Boy Was Me.