1) It's SATURDAY, JUNE 19. Today is the first Juneteenth as a national holiday, celebrating the end of slavery. 2) I was back in-studio on the Le Batard Show this week for my regular Tuesday appearance. Check out that day's show podcasts for much too much of me. 3) Follow the Greg Cote Show podcast on Twitter and Instagram. 4) In The Previous Blogpost (ITPB): Hot Button Top 10, new Greg Cote Show podcast & more. 5) Join me on Twitter and Instagram.

GREG COTE SHOW PODCAST: NEW EPISODE WITH JESSICA SMETANA OUT NOW!: Our 23rd episode of 2021 and 65th overall is out now! A new pod drops every Monday at 7 a.m. ET on Apple, Spotify, Google, Amazon, Stitcher, Megaphone, iHeart -- wherever you pod, and of course at MiamiHerald.com. You can find all 64 we've done so far HERE for free. Our new episode features Jessica Smetana, newest member of the Le Batard Show Shipping Container. (Did the chat get too personal?) Also, hear DeArdo The Magnificent flex his encyclopedic knowledge of sports. Plus, what's in the Queen's handbag? Thanks as always for the support, pod family. Please listen, rate, review and follow! (Our pod now simulcasts on Sirius XM, too, every Monday 5-6 p.m. ET on Channel 145). 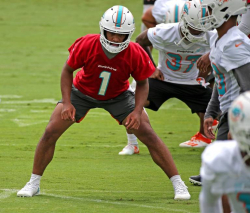 HERE'S WHAT ELSE HAS TO GO RIGHT (BESIDES TUA) TO KEEP DOLPHINS' MOMENTUM GOING: Been a long time coming, but the sense of a franchise and team trending upward is palpable. The Miami Dolphins are in the midst of a smartly calculated rebuild that will include eight first-round draft picks in the four year span of 2020-23. The Fins were 10-6 last season, the best team in the NFL to miss the playoffs. Brian Flores has been a prize catch as head coach. If the future isn’t quite now, it’s getting here at a gallop. Areas of concern remain, though, as the Dolphins completed their offseason work Thursday with the finish of a mandatory three-day minicamp. Fins won’t gather on a field again until the late-July start of full preseason training camp. There is a reason Miami is no better than middle of the pack, tied for 16th, in current betting odds to win the Super Bowl. Here are the five biggest concerns, the things that need to go right, if the Dolphins are to build upon the promise of last season. For our full latest column including of course those five concerns, visit Here's What Else Must Go Right (Besides Tua) For Dolphins To Continue Momentum.

WHEN RUMORS FLY, AND LAND WITH THUD: THE TRUTH ON SPOELSTRA, LILLARD AND HEAT: Portland Trail Blazers interested in Erik Spoelstra! Wait. Really? Damian Lillard interested in Miami Heat! Wait. Hold on. Heat fans have been fed reasons this week to turn their attention to northwest Oregon. The question worth exploring: Why? I try to not be a self-loathing journalist — the anti-media crowd is loud enough without my help — but occasionally the business of reporting, of what a “report” even is, makes me cringe a bit. So Tuesday there were reports the Trail Blazers, looking for a new coach, had the Heat’s Spoelstra on their radar. Except the reports were just other media outlets regurgitating the original report that wasn’t actually a report at all. It was Ethan Skolnick of Five Reasons Sports Network tweeting this: “We have multiple sources saying Erik Spoelstra’s name has been discussed internally regarding their coach opening. We are NOT reporting contact has been made, or that Spoelstra has any intention of leaving Miami.” It might well have been accurate. Portland supposedly is cobbling a list of potential candidates that might be three dozen long. That’s a lot of internal discussing. Front-runners seem to include Chauncey Billups and Mike D’Antoni. Becky Hammon and Dawn Staley are also in the reported mix, in case Portland works up the nerve be be actual Trail Blazers. But it made sense in terms of speculation that the wide net might include Spo, who grew up in Portland and played for the local university, and whose father Jon is a former Trail Blazers executive. I know Ethan. He’s a former Herald colleague. He’s legit. Knows the NBA. He isn’t some uninformed fan writing in a blog from Ma’s basement. He also has since-deleted the tweet that started this, that other outlets passed along as some variant of news. In the social media age, deleting a tweet is akin to renting a billboard on I-95 that reads, OOPS. It happened to be Skolnick this time but it could have been any of us in the mad rush to be first. For our full recent column, visit Rumors, Speculation and the Truth on Spoelstra, Lillard and Heat.

MEN'S TENNIS, GOLF BOTH AT A CROSSROADS, IN SEARCH OF THEIR NEXT BIG THING: With the French Open in tennis just past and the U.S. Open in golf this week, the majors show us two men’s sports at a crossroads and searching. If there is a Next Big Thing in either worthy of the capital letters and able to stir the imagination, we’ll take a show of hands, please. Please? Novak 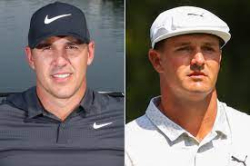 Djokovic rallied from two sets down Sunday to win on the red clay of Roland Garros in Paris. It was a remarkable comeback. It also was the latest reminder how men’s tennis is drowning in its own predictability in the Big 3 era (pictured left) of Djokovic, 34; Rafael Nadal, 35; and Roger Federer, who’ll turn 40 in August. Since 2004 those three have combined to win 58 of the sport’s 68 major men’s titles, or 85 percent. There hasn’t been a run like that in any individual sport, ever. That it goes on, though, speaks less of those three’s continued excellence than it does the absence of sustained challengers. Or even one. The slow death of American men’s tennis has played a big role. No American man has won a tennis major since Andre Agassi and Andy Roddick both did in 2003, just as the Federer/Nadal/Djokovic steamroller was beginning its roll. On the women’s side Serena Williams fades by degrees, but there is a young heir in Naomi Osaka, Japan-born but living in the U.S. since age 3. In men’s tennis, very good players such as Daniil Medvedev, Stefanos Tsitsipas and Dominic Thiem have failed to become household names outside of the sport’s hardcore fandom, or hasten the past tense on the Big 3 era. And no American man ranks higher today on the ATP than No. 32. That’s a person named Reilly Opelka. He is notable for being 6-11. He is not notable for winning anything of note. In men’s golf the search for the Next Big Thing, the next big era, (Brooks Kopeka and Bryson DeChambeau are pictured right) is similar as the U.S. Open begins Thursday at Torrey Pines in La Jolla, California, near San Diego. For our full recent column, visit Wanted: A 'Next Big Thing' In Men's Tennis, Golf.

Other columns from the past week: Where's Tua? Ranking Our Top 15 South Florida Pro Athletes 25 And Younger  /  As Teams Like Miami Pray For Right QB, Packers' Disrespect Of Rodgers Is Galling  /  and Messi-to-Miami Is Shot of Hope David Beckham's Troubled Soccer Club Needs.

Heat/Panthers playoff columns: Miami Heat, With No Answers, Put Out of Misery In Game 4 Loss To Milwaukee / Heat Fans Showed Up For Game 3. Their Team Did Not / Another Early Panthers Playoff Exit Ends An Encouraging Season Too Soon / Time For Heat Fans To Help Lift Their Team Back Into This Series / Heat Fall, Panthers Need Miracle On Ice As Both Lose On Big Day for Miami Sports / Panthers, Hopes Of Fans In Peril After Game 2 Loss, 2-0 Series Hole / Chasing Respect, Florida Panthers' 5-4 Home Loss A Crushing Start to Playoffs / This Looks Like Best Florida Panthers Team Ever. But The Proving Starts Now.

Select other recent columns: Hall of Fame Snubbed Chris Bosh Last year. Time To Make it Right / Aging Ex-Dolphins Reflect On Own Mortality One Year After Shula's Death / Aaron Rodgers' Packers Drama Involves Miami (Of Course). But Here's Why It Won't Happen / Grade-A Draft Feeds Momentum For Team-On-the-Rise Dolphins / Iffy Trades That Cost Them Pitts Mean Dolphins Better Hit Big With Waddle / Le Batard Bet On Himself And His Audience -- And Won Big / Justice For George Floyd Helps Heal Our Shaken Faith, But Fight For Equality Goes On / What Would Jackie Robinson Think About Race In America Today? / The Case For Dolphins Trading Up, Going All-In For Kyle Pitts / It Won't Fix the World, But Matsuyama's Masters Win Lifts Japan In Time Of Anti-Asian Hate / Talk Of U.S. Olympic Boycott A Reminder Sports, Politics Are Entwined -- And That's Good / How And Why the Miami Heat Landing Kawhi Leonard This Summer Could Happen / The Miami Dolphins' Six Can't-Lose Options For a Great No. 6 Pick in NFL Draft / Even After Playoffs In '20, Marlins Still 'Bottom Feeders' Fighting For Respect / Special Opening Day as Marlins Welcome Back Fans, Feeling Of Hope / In History And In Hearts, Howard Schnellenberger Will Matter For All Time / Beckham Keeps Name-Dropping Messi, Ronaldo For Inter Miami. Can He Deliver? / Women Keep Accusing Deshaun Watson of Sexual Misconduct. But Will It Matter to NFL Teams? / No-Splash Free Agency Indicates Dolphins Going All In On Upcoming Draft -- And Tua / Phil Reflects on 25-Year Rivalry/Friendship With Tiger As Honda Classic Tees Off / Reality, Loss, Comeback: How Sports Has Been Guiding Light In America's Awful Past Year / Heat Should Parts Ways With Meyers Leonard Over Anti-Semitic Slur / Beckham's Resolve Tested By Tumult As Inter Miami Nears 2nd MLS Season / Time-Travelling To 1960s And Childhood, When The Baseball Card Was King / Quit Lecturing LeBron On Activism And His Own Conscience / Michael Jordan, Pitbull Signal Needed New Era as NASCAR Returns to Homestead / Doesn't Matter If Tiger Woods Never Wins Again. We Are Lucky He's Alive / Loss at Aussie Open Leaves Serena's Legacy Firm Yet Still Unfinished / Marlins Stick With Youth As Rest Of NL East Spends Big / Inter Miami's Beckham Risks Stepping Into Massive, Avoidable Mess / Put Brady In Sports' All-Time Pantheon. But He Has Company / Final Herald NFL 2020 QB Rankings / Marlins Hit History-Making Home Run With Kim NG Hire As GM / In a Pandemic-Battered Season For FIU, Butch Davis' Love Of Coaching Survives / Don Shula, 1930-2020, R.I.P. / What Shula Meant to a Father & Son. The Boy Was Me.