1) It's SATURDAY, JUNE 12. The Dan Le Batard Show With Stugotz 24-hour marathon broadcast was this past noon Friday through noon Saturday. Check it out on the Le Batard And Friends YouTube channel. I was back on the Le Batard Show yesterday for my regular Tuesday slot. Check thatout on the show's podcasts. 2) Follow the Greg Cote Show podcast on Twitter and Instagram. 3) In The Previous Blogpost (ITPB): Hot Button Top 10, Behind the scenes inside Le Batard's 24-hour broadcast, new Greg Cote Show podcast & more. 4) Join me on Twitter and Instagram.

GREG COTE SHOW PODCAST: BELLY BUTTON DOCTOR, PSYCHIC, ANGRY WIFE JOIN NEW EPISODE OUT NOW!: Our 22nd episode of 2021 and 64th overall is out now! A new pod drops every Monday at 7 a.m. ET on Apple, Spotify, Google, Amazon, Stitcher, Megaphone, iHeart -- wherever you pod, and of course at MiamiHerald.com. You can find all 64 we've done so far HERE for free. Our new episode features an extremely tired, sleep-deprived Greg broadcasting live at 4 am. A doctor is on to examine Greg's belly button abnormality. Also, a psychic drops by, and the Fancy Lad reveals a bizarre pre-sleep ritual. Plus: Welcome to Miami, Messi! Thanks as always for the support, pod family. Please listen, rate, review and follow! (Our pod now simulcasts on Sirius XM, too, every Monday 5-6 p.m. ET on Channel 145).

WAIT, A TEENAGER? WHERE'S TUA! OUR TOP 15 SOUTH FLORIDA PRO ATHLETES AGES 25 AND YOUNGER: Look around sports and prepare to feel old. Athletes’ careers are lasting longer. The grizzled veteran is not extinct. But Tom Brady reigning over the NFL (again) at age 43 is the anomaly. More common, the greater phenomenon and trend, is the rise and dominance of young

players 25 and under. Patrick Mahomes. Giannis Antetokounmpo. World champion gymnast Simone Biles. Tennis star Naomi Osaka. Gold-medla swimmer Katie Ledecky. MLB lightning rods Valdimir Guerrero Jr., Fernando Tatis and Ronald Acuna Jr. American soccer hope Christian Pulisic. Newly minted NBA MVP Luka Doncic. Hockey star Connor McDavid. I have record albums and baseball cards older than all of them. All are 25 or younger. Baby GOATs. Even athletes born in the 2000s are beginning to make their mark. It got me to looking in my own backyard. Who are the top 25-and-under athletes from South Florida’s big five pro teams? Who among the Miami Dolphins, Heat, Marlins, Florida Panthers and Inter Miami rate? We first did this exercise way back in 2013 (that list was topped by Giancarlo Stanton and Jose Fernandez). Did it again a little over two years ago, in spring 2019. But things change fast. Guys are traded. They get too old to qualify. So it’s time to do t again. Our 2021 top 15 South Florida athletes ages 25 and younger from our big five pro teams. For our full latest column including that top 15 ranking, visit Where's Tua? Ranking Our Top 15 South Florida Pro Athlest 25 And Younger. 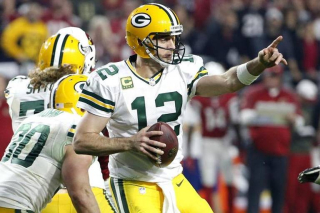 AS TEAMS LIKE DOLPHINS PRAY FOR RIGHT QB, GREEN BAY'S DISRESPECT FOR MVP RODGERS IS GALLING: The Green Bay Packers’ continuing, colossal botchery of the Aaron Rodgers situation is epic. If it ends wrong it will stain one of the NFL’s most storied franchises enough to make the ghost of Vince Lombardi weep. The impasse got real this week as the superstar quarterback and reigning league MVP became an official holdout, boycotting the team’s mandatory minicamp. Packers president Mark Murphy said the impasse “has divided our fan base.” He must be kidding. There isn’t a self-respecting fan who has ever sat at Lambeau under a Cheesehead hat who wouldn’t immediately trade Murphy, general manager Brian Gutekunst and head coach Matt LaFleur if it meant Rodgers stayed. Do the people running the Packers understand what they have? Maybe the greatest QB ever? A man astonishingly in his prime at 37 based on last season? So many franchises — the Miami Dolphins come to mind — work and plot and dream and hope for decades that they might hit upon a generational talent like Rodgers. Wait. Amend that. Teams will settle for a really good quarterback. Nobody dares think they have just drafted a Hall of Famer, an all-time great. The rarity of hitting big, Rodgers-big, is hitting the lottery stuff. Look at the Dolphins with Tua Tagovailoa right now as the 2020 fifth overall draft pick works toward his second season. Not even the most dedicated Dolfan can say with certainty “He’s going to be great” because not even the expert eyes of GM Chris Grier and coach Brian Flores can be sure yet. Green Bay has what every team wants, but has managed to louse up its relationship with its irreplaceable QB to a degree is demanding to be traded.It’s the biggest story in King Sport even amid the Deshaun Watson scandal and the trades of Matthew Stafford, Jared Goff, Sam Darnold and Carson Wentz. And amid trades of DeAndre Hopkins, Stefon Diggs and now Julio Jones. And 33 first- or -second-round draft picks changing hands this spring. Rodgers staring down the Packers and not blinking is bigger. For our full recent column, visit As Teams Like Miami Pray For Right QB, Packers' Disrespect Of Rodgers Is Galling. 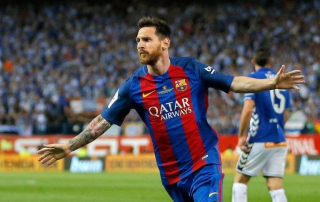 LIONEL MESSI-TO-INTER MIAMI IS THE SHOT OF HOPE DAVID BECKHAM'S TROUBLED CLUB NEEDS: What’s real isn’t always obvious or easily discernible in sports. We saw that Sunday night at Hard Rock Stadium. If you stick a boxing ring on a football field, and put 44-year-old retired Floyd Mayweather inside it to fight a YouTube star turned made-up fighter named Logan Paul ... is it a boxing match? If there are no judges scoring it and no winner declared in what was a farce of an exhibition? They sold tickets and ESPN covered it, so it must have actually happened. It was as real as “The Bachelorette” and the Kardashians and TikTok celebrity. Something else happened in Miami sports within the past few days, although it didn’t get as much a attention as Jake Paul (Logan’s brother) snatching the hat off Money Mayweather’s head at a prefight event. It seems Lionel Messi is going to play for Inter Miami. Is it real? Will it actually happen? Rumor and speculation tend to transmogrify into reported news when it comes to soccer and the European and South American press. Is it legit? Or is it the National Enquirer reporting that Supreme Court Justice Antonin Scalia was assassinated by a hooker? In this case a Catalan-based Spanish daily called Sport, a legitimate media outlet, reported that Messi, the brilliant Argentine forward, is negotiating a new deal to remain with his La Liga club team FC Barcelona beyond his retirement — but including a two-year Major League Soccer swansong in Miami. If it’s true — Messi to Miami — it would be the most exciting sports news down here since LeBron James took his talents to South Beach in 2010. Messi would arguably be the biggest star in his sport to ever suit up for a South Florida team. For our full recent column, visit Messi-to-Miami Is Shot of Hope David Beckham's Troubled Soccer Club Needs.

Our Heat/Panthers playoff columns: Miami Heat, With No Answers, Put Out of Misery In Game 4 Loss To Milwaukee / Heat Fans Showed Up For Game 3. Their Team Did Not / Another Early Panthers Playoff Exit Ends An Encouraging Season Too Soon / Time For Heat Fans To Help Lift Their Team Back Into This Series / Heat Fall, Panthers Need Miracle On Ice As Both Lose On Big Day for Miami Sports / Panthers, Hopes Of Fans In Peril After Game 2 Loss, 2-0 Series Hole / Chasing Respect, Florida Panthers' 5-4 Home Loss A Crushing Start to Playoffs / This Looks Like Best Florida Panthers Team Ever. But The Proving Starts Now.

Select other most recent columns: Hall of Fame Snubbed Chris Bosh Last year. Time To Make it Right / Aging Ex-Dolphins Reflect On Own Mortality One Year After Shula's Death / Aaron Rodgers' Packers Drama Involves Miami (Of Course). But Here's Why It Won't Happen / Grade-A Draft Feeds Momentum For Team-On-the-Rise Dolphins / Iffy Trades That Cost Them Pitts Mean Dolphins Better Hit Big With Waddle / Le Batard Bet On Himself And His Audience -- And Won Big / Justice For George Floyd Helps Heal Our Shaken Faith, But Fight For Equality Goes On / What Would Jackie Robinson Think About Race In America Today? / The Case For Dolphins Trading Up, Going All-In For Kyle Pitts / It Won't Fix the World, But Matsuyama's Masters Win Lifts Japan In Time Of Anti-Asian Hate / Talk Of U.S. Olympic Boycott A Reminder Sports, Politics Are Entwined -- And That's Good / How And Why the Miami Heat Landing Kawhi Leonard This Summer Could Happen / The Miami Dolphins' Six Can't-Lose Options For a Great No. 6 Pick in NFL Draft / Even After Playoffs In '20, Marlins Still 'Bottom Feeders' Fighting For Respect / Special Opening Day as Marlins Welcome Back Fans, Feeling Of Hope / In History And In Hearts, Howard Schnellenberger Will Matter For All Time / Beckham Keeps Name-Dropping Messi, Ronaldo For Inter Miami. Can He Deliver? / Women Keep Accusing Deshaun Watson of Sexual Misconduct. But Will It Matter to NFL Teams? / No-Splash Free Agency Indicates Dolphins Going All In On Upcoming Draft -- And Tua / Phil Reflects on 25-Year Rivalry/Friendship With Tiger As Honda Classic Tees Off / Reality, Loss, Comeback: How Sports Has Been Guiding Light In America's Awful Past Year / Heat Should Parts Ways With Meyers Leonard Over Anti-Semitic Slur / Beckham's Resolve Tested By Tumult As Inter Miami Nears 2nd MLS Season / Time-Travelling To 1960s And Childhood, When The Baseball Card Was King / Quit Lecturing LeBron On Activism And His Own Conscience / Michael Jordan, Pitbull Signal Needed New Era as NASCAR Returns to Homestead / Doesn't Matter If Tiger Woods Never Wins Again. We Are Lucky He's Alive / Loss at Aussie Open Leaves Serena's Legacy Firm Yet Still Unfinished / Marlins Stick With Youth As Rest Of NL East Spends Big / Inter Miami's Beckham Risks Stepping Into Massive, Avoidable Mess / Put Brady In Sports' All-Time Pantheon. But He Has Company / Final Herald NFL 2020 QB Rankings / Marlins Hit History-Making Home Run With Kim NG Hire As GM / In a Pandemic-Battered Season For FIU, Butch Davis' Love Of Coaching Survives / Don Shula, 1930-2020, R.I.P. / What Shula Meant to a Father & Son. The Boy Was Me.