1) It's SATURDAY, MAY 8. I was on the Dan Le Batard Show With Stugotz on Thursday this week, and back in-studio for first time in more than a year with a new Back In My Day. Check out yesterday's show podcasts for way too much of me. 2) The Greg Cote Show podcast is now separately on Twitter and Instagram. Join us on both! 3) In The Previous Blogpost (ITPB): Dolphins' Waddle-led NFL Draft, with mock draft and draft poll results, Hot Button Top 10, new Greg Cote Show podcast with draft talk and Anthony (Tony) Calatayud & more. 4) Join me on Twitter and Instagram.

GREG COTE SHOW PODCAST: DRAFT REVIEW, TONY CALATAYUD ON NEW EPISODE OUT NOW!: Our new 17th episode of 2021 and 59th overall is out now! A new pod drops Mondays at 7 a.m. ET on Apple, Spotify, Google, Amazon, Stitcher, Megaphone, iHeart -- wherever you pod, and of course at MiamiHerald.com. You can find all 59 we've done HERE for free. Our latest episode features special guest Anthony (Tony) Calatayud, pictured, from the Le Batard Show Shipping Container before mysteriously falling off the pirate ship. Also, Greg raves about the Dolphins draft, how the Arizona Diamondbacks won Twitter and much more. Thanks as always for the support, pod family. Please listen, rate, review and follow! (Our pod now simulcasts on Sirius XM, too, every Monday 5-6 p.m. ET on Channel 145). 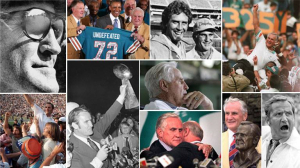 AGING EX-DOLPHINS REFLECT ON OWN MORTALITY ONE YEAR AFTER SHULA'S DEATH: Miami Dolphins fans have spent this week in the afterglow of a successful NFL Draft — one that has them daring to dream that happy days are here again (or at least getting close). Chances are it did not occur to most Dolfans that it was one year ago this week when the architect of the franchise’s happiest days passed away. Don Shula died one year ago Tuesday, at age 90. It is an anniversary worth noting, not with sadness but with fond memories and gratitude. “Hard to believe it’s been a year since he’s been gone,” Larry Little, the old guard, said Wednesday. “Some people you think are going to be around forever, and Coach Shula was one. I think of him often. I’m still missing him.” Eldest son Dave Shula returned to coaching after a 22-year-absence in 2018. He is Dartmouth’s wide receivers coach. The team’s first spring practice was on the anniversary of his father’s passing.“Life goes on as he would want it,” Dave said Wednesday. “I certainly think about it every day. During the season when the last [unbeaten] team lost, we shared some good memories and laughed that Dad was still undefeated. He left this Earth undefeated. And the ‘72 guys in heaven now -- they’re running the table up there now, still undefeated, too.” For our full latest column, visit Aging Ex-Dolphins Reflect On Own Mortality One Year After Shula's Death.

AARON RODGERS' GREEN BAY DRAMA INVOLVES DOLPHINS? TWO REASONS IT'LL NEVER HAPPEN: It caught my eye as I breezed past ESPN.com Tuesday. Bill Barnwell, the NFL writer, was proposing possible trade offers for Aaron Rodgers. The headline: ‘Seven teams and deals that make sense.’ “Uh-oh,” I thought to myself with dread. I knew it was coming. I clicked on the story as one might nervously press a mysterious button that might or might cause unseen dynamite to detonate. Sure enough, inevitably, predictable as humidity in Miami, there it was: The Dolphins were ranked as the third-likeliest team where a deal for Rodgers seemed possible and made sense, trailing only the second-place Washington No-Names and the top-ranked Denver Broncos. Barnwell posits a complicated three-team trade, which is pretty common in the NBA but almost unheard of in King Sport. He has the Dolphins getting Rodgers and a 2023 fourth-round pick; the Steelers getting Tua Tagovailoa; and the Packers getting 2022 and 2023 first-round picks and a ‘23 fifth-rounder from Miami and a ‘22 first-round pick from Pittsburgh. You’ve heard of football. This is a game of mootball because it will never happen for a variety of reasons. For our full recent column -- including what those reasons  are and a fun list of things Pack should do to make Aaron happy -- visit Aaron Rodgers' Packers Drama Involves Miami (Of Course). But Here's Why It Won't Happen.

GRADE-A DRAFT FEEDS DOLPHINS' MOMENTUM, SEES LONG-DOWN FRANCHISE READY TO RISE: Almost 50 years after the Super Bowl wins and nearly 40 years since Dan Marino’s arrival shot electricity across Miami, the Dolphins are luxuriating in something not seen or felt around here in a long time. The right kind of national attention. Universal praise. The sense this is a franchise to be reckoned with, headed right, ready to matter again in the NFL. Miami won 10 games last season with its best points differential since 2002, its most points scored since 1986 and a defense that tied for fifth in fewest points allowed. Despite an uneven rookie season, the arrival of quarterback Tua Tagovailoa brought excitement and promise in a way not felt since Dan Marino. Now, a draft nothing short of acclaimed. Mel Kiper Jr. of ESPN gave an A grade to only two of 32 teams for their NFL Draft bounty: the Los Angeles Chargers, and the Dolphins. Said Kiper of Miami’s draft: “Looking at this roster, I don’t think it’s far away from being a Super Bowl contender, and the Dolphins hit their major needs. This is a stellar class overall.” For our full recent column, visit Grade-A Draft Feeds Momentum For Team-On-the-Rise Dolphins.

Our most recent other columns: Iffy Trades That Cost Them Pitts Mean Dolphins Better Hit Big With Waddle / Le Batard Bet On Himself And His Audience -- And Won Big / Justice For George Floyd Helps Heal Our Shaken Faith, But Fight For Equality Goes On  /  What Would Jackie Robinson Think About Race In America Today?  /  The Case For Dolphins Trading Up, Going All-In For Kyle Pitts  /  and It Won't Fix the World, But Matsuyama's Masters Win Lifts Japan In Time Of Anti-Asian Hate.