After snub last year, time for Hall of Fame to do right by Chris Bosh. New column; plus This looks like Florida Panthers' best team ever. Now we begin to find out; also, latest Greg Cote Show podcast with ESPN's Izzy Gutierrez out now & more

1) It's SATURDAY, MAY 15. Happy birthday, Michael! My youngest son and Friday B-Day Boy is pictured on the left at a Marlins game with myself and his older brother Christopher. 2) I was back in-studio for my regular Tuesday spot on the Dan Le Batard Show With Stugotz this week. Check out that day's show podcasts for way too much  of me. 3) The Greg Cote Show podcast is now separately on Twitter and Instagram. Join us on both! 4) In The Previous Blogpost (ITPB): Hot Button Top 10, new Greg Cote Show podcast with ESPN's Israel Gutierrez, latest column links & more. 5) Join me on Twitter and Instagram.

GREG COTE SHOW PODCAST: NEW EPISODE WITH ESPN'S IZZY GUTIERREZ OUT NOW!:  Our new 18th episode of 2021 and 60th overall is out now! A new pod drops Mondays at 7 a.m. ET on Apple, Spotify, Google, Amazon, Stitcher, Megaphone, iHeart -- wherever you pod, and of course at MiamiHerald.com. You can find all 60 we've done HERE for free. Our latest episode features special guest Israel (Izzy) Gutierrez of ESPN (pictured) in a fun conversation about boats, sneakers, golf and Chris Cote's social skills. Oh, and hoops talk, too, including Chris Bosh's Hall of Fame chances and how the Heat are looking as the playoffs near. Also, an historic new Mount Gregmore. Bonus: Greg sings the song that was playing on the radio when he first kissed a girl. Thanks as always for the support, pod family. Please listen, rate, review and follow! (Our pod now simulcasts on Sirius XM, too, every Monday 5-6 p.m. ET on Channel 145). BASKETBALL HALL OF FAME WRONGED CHRIS BOSH LAST YEAR. TIME TO GET IT RIGHT: It might be a stretch to apply the words underrated or even underappreciated to Chris Bosh’s basketball career. Only 35 players in NBA history have made the all-star team at least 11 times. Bosh is one. And yet, when a player achieves his greatest success on a Miami Heat team that includes neon superstars LeBron James and Dwyane Wade, well, there is never a doubt who gets cast as the third of the Big 3. The idea that Bosh has never quite gotten his full due was underlined a year ago. He took a gut punch. One he didn’t expect. Not only was Bosh denied the distinction of being a first-ballot Hall of Famer last year in his first year of eligibility — he didn’t even make the list of finalists. It stunned those in the Heat organization. To not even be a finalist was a hard, blindside slap. An insult. “I’m not going to lie, man,” Bosh said then. “I’m disappointed that I didn’t even get considered.” The Naismith Memorial Basketball Hall of Fame, based in Springfield, Massachusetts, won’t make the same mistake twice when the 2021 Hall class is announced Sunday. Bet the farm on that. Then take out a loan and bet that money, too. Bosh getting in this time seems that certain. And is that deserved. This time, Bosh is one of 14 finalists including seven former NBA players, and only Boston great Paul Pierce is considered as likely to get in. For our full latest column, visit Hall of Fame Snubbed Chris Bosh Last year. Time To Make it Right.

BEST FLORIDA PANTHERS TEAM EVER? PROOF STARTS NOW, IN PLAYOFFS, VS. BIG BROTHER TAMPA BAY: The Florida Panthers team on the ice right now is the best in the 27 seasons since the NHL dared to put a hockey team in the tropics. It might not even be close. Now they must prove it in a best-of-7 playoff series vs. the defending champion and 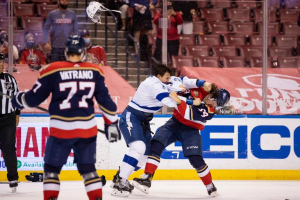 bitter rival Tampa Bay Lightning starting Sunday. A mountainous climb is where the proving starts. A brutal stage for what to expect was set last Saturday in the Panthers’ 5-1 win over Tampa, a fist-flying slugfest that saw 31 penalties totaling 154 minutes in the box, including 10 misconducts and four fighting majors. “Old-time hockey,” Florida coach Joel Quenneville called it. “I loved everything about it,” said goaltender Sergei Bobrovsky. Leading scorer Jonathan Huberdeau wore a bloody gash on the bridge of his nose as a badge after the game. “It was physical. We don’t mind that,” Huberdeau said. “We’re going to match that.” You see with the eye how good these Panthers are. If you need to quantify it, the Cats this regular season won nearly 70 percent (.694) of all the standings points available to them — best by a lot in franchise history. By comparison, the 1996 Panthers, the only iteration to reach the Stanley Cup Finals, won a .561 points share, only eighth-best in club history. That team was scrappy and fun and made even South Florida hockey agnostics fall in love for a minute as the rubber rats flew and a roster of overachievers played the role of Cinderella on skates. Midnight struck hard. As if to underline that the ‘96 Cats were a blue-collar bunch that didn’t seem cut out to be champions, they got swept 4-0 in the Finals by Colorado. No disrespect meant to that team, but the far-more-talented 2021 Panthers would overwhelm it in every way. Florida in '96 was a young franchise with fans just happy to be here. Not now. Twenty-five years after that franchise peak, today’s Cats must demonstrate they are the best in club history by the only measure that matters: Not only getting to the Finals but winning the Stanley Cup. And how exquisitely perfect that the Panthers must go through Tampa Bay to get there. For our full recent column, visit This Looks Like Best Florida Panthers Team Ever. But The Proving Starts Now.
Our most recent other columns:

Additional recent columns: Iffy Trades That Cost Them Pitts Mean Dolphins Better Hit Big With Waddle / Le Batard Bet On Himself And His Audience -- And Won Big / Justice For George Floyd Helps Heal Our Shaken Faith, But Fight For Equality Goes On  /  What Would Jackie Robinson Think About Race In America Today?  /  The Case For Dolphins Trading Up, Going All-In For Kyle Pitts  /  and It Won't Fix the World, But Matsuyama's Masters Win Lifts Japan In Time Of Anti-Asian Hate.