GREG COTE SHOW PODCAST: ESPN'S  MINA KIMES TALKS NFL DRAFT IN NEW EPISODE OUT NOW!: Our new episode, out now, features special guest Mina Kimes of ESPN (pictured) to talk NFL Draft and Miami Dolphins. Also, Mina and Greg face off in a geography quiz. This is our 16th episode of 2021 and 58th overall. A new pod drops Mondays at 7 a.m. ET on Apple, Spotify, Google, Amazon, Stitcher, Megaphone, iHeart -- wherever you pod, and of course at MiamiHerald.com. You can find all 58 we've done HERE for free. In our new Ep16, along with Mina, in a Big Reveal we introduce a third member of our podcast team joining Greg and Chris. Also, wait, is that Joe Biden on the phone? Bonus: The Mount Gregmore of Dolphins' all-time worst first round draft picks. Thanks as always for the support, pod family. Please listen, subscribe, rate and review! (Our pod now simulcasts on Sirius XM, too, every Monday 5-6 p.m. ET on Channel 145). 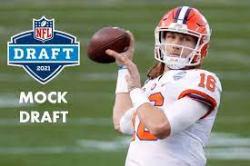 IT'S OUR 30TH ANNUAL NFL MOCK DRAFT, AND THE DOLPHINS GET LUCKY ... TWICE: By the numbers, this is the NFL’s 86th draft, the Miami Dolphins’ 56th, and my 30th annual Miami Herald mock draft. (Does Hallmark make an anniversary card for that?) This also is the 48th draft since the Dolphins last won a Super Bowl, which is why the onus grows ever-heavier on Miami to hit big with its picks and finally end that ponderous drought. This year the Dolphins are one of four teams with two first round picks, and if my 2021 mock is right, coach Brian Flores and Fins fans will be feeling quite giddy come late Thursday. That is because I have Miami landing the draft’s top wide receiver, Ja’Marr Chase, with the sixth overall pick and getting the highest-ranked defensive end/edge rusher, Kwity Paye, with the 18th selection. Both might take some luck, as I explain below. I figure a fandom waiting 48 years for another parade is due some of that. The past four years my mocks have featured 22 bull’s-eyes (exact player to exact team), including seven last year — one better than ESPN’s Mel Kiper Jr. That’s pretty good considering our mocking is a brief flurry of tea leaves and tarot cards, not the year-round cottage industry it is for the Kipers. Closest I get to film study is rewatching the “Wizard Of Oz.” I simply cross-reference every team’s needs with best available players and let the darts fly. We do one mock draft only. We also do not assume any draft-night trades, although we mention what’s likely. My only guarantee is that, for the 30th straight year, I will correctly get every first-round pick in exact numerical order, 1 through 32. Ready? Let’s rock. Let’s mock!

Follow along tonight as I live-grade my Mock Draft with these three symbols:

Check-mark indicates I had player in first round, but not to right team.

An 'X' means the player actually drafted was nowhere in my first round.

2. New York Jets: Zach Wilson, QB, BYU/ PICK: Zach Wilson / If he's as good as division rival NYJ thinks, it's more pressure on Tua to be the same in Miami. 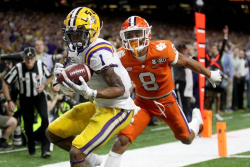 6. MIAMI DOLPHINS: JA’MARR CHASE, WR, LSU — [Pick from Philadelphia] Fins already have had a busy draft, yo-yo’ing from third to 12th to sixth with two major trades. They could do it yet again and trade up with Atlanta to get Pitts. I also hear whispers a trade-down with a QB-hungry team might be a possibility if Dolphins felt a top receiver would still be there. But in my scenario, no way Miami bypasses Chase, the draft’s No. 1 wide receiver, if he’s there. Also in this scenario, if Cincy were to snatch Chase (a real possibility), Fins would then have their choice of reuniting Tua Tagovailoa with either of his former Alabama teammates, DeVonta Smith or Jaylen Waddle (and I would give Waddle the edge there). Clearly, Dolphins need to spend this top pick on a weapon for Tua, and Chase would be just that alongside DeVante Parker, Will Fuller and Mike Gesicki. Miami’s recent signing of veteran tackle D.J. Fluker was an indication Fins plan to resist the temptation to select Sewell even if he were to fall to them. We nailed Miami top-drafting Tagovailoa last year even as many other mocks thought otherwise. Let’s see if we’re right again / PICK: Jaylen Waddle / A mild surprise. Column coming.

7. Detroit Lions: Jaylen Waddle, WR, Alabama / PICK: Penei Sewell / I was only one off where Waddle would be taken. I'm not celebrating.

17. Las Vegas Raiders: Alijah Vera-Tucker, OG/T, USC / PICK: Alex Leatherwood / What the ... who!? What a reach. Our first outright miss.

18. MIAMI DOLPHINS: KWITY PAYE, DE, MICHIGAN — After scoring a toy for Tua with the sixth overall pick, the Fins turn to D and nab the draft’s top-rated edge rusher. Miami needs more heat on opposing QBs to balance a solid pass defense and Paye will bring it. Great story, too. Paye is Liberian but was born in a refugee camp in Guinea in the wake of the first Liberian Civil War before his family emigrated to the U.S. when he was an infant. If Paye is off the board, look for Fins to look hard in the backyard at Hurricanes edge rusher Jaelan Phillips, although his injury/concussion history might give pause. Wouldn’t be stunned if Fins reached for a running back here (Travis Etienne?), but neither would I bet on it / PICK: Jaelan Phillips / Right position, wrong player. If Phillips stays healthy a great pick.

19. Washington Football Team: Jeremiah Owusu-Koramoah, LB / PICK: Jamin Davis / One of the last guys I left out of my first round.

21. Indianapolis Colts: Jaelan Phillips, DE, Miami / PICK: Kwity Paye / This is the guy I thought Miami should have taken over Phillips. (Mark my words).

32. Tampa Bay Buccaneers: Travis Etienne, RB, Clemson / PICK: Joe Tryon / Ouch. Too many X's on our board this year. 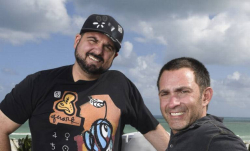 LE BATARD'S MASSIVE $50 MILLION DEAL WITH DRAFTKINGS: "WE CASHED A BET WE MADE ON OURSELVES": The biggest question in sports media — where will the Dan Le Batard Show With Stugotz end up? — now has an answer. It came Tuesday afternoon with the announcement that Meadowlark Media and DraftKings have formed a multiplatform partnership for the popular Miami Beach-based show. Meadowlark Media is the

content company Le Batard and former ESPN president John Skipper formed in January, the Le Batard Show its flagship entity. Starting in June or by early July, DraftKings, the daily fantasy sports and sports betting operator, will distribute the Le Batard Show on any and all platforms including radio, television, podcast and social media. The Miami Herald was told DraftKings is spending about $40 million in a three-year deal. The Wall Street Journal reported the deal as $50 million. Sirius XM, Peacock and iHeart Radio were among a half dozen entities in a bidding war to land the Le Batard Show. An industry source said Sirius was pushing hard, offering tens of millions in money and pitching the Le Batard Show as the sports heir to that network’s megapopular Howard Stern Show. Sirius XM was a tempting offer because of Le Batard’s oft-stated love of live radio, but he did not want a situation that would have put his listeners behind a paywall or force them to subscribe to listen. "We didn’t want to do that to our listeners," Le Batard told the Miami Herald. "The thing that I chose was freedom. Every time I’ve negotiated anywhere was for freedom, not money. This allows Meadowlark to be profitable from the start, and have total freedom to do what we want. We can go forward and appear everywhere. We can make partnerships anywhere we want. We don’t have any corporate overlord. Our partner is our sponsor and what they are sponsoring is our freedom." For our full story, visit Le Batard Bet On Himself And His Audience -- And Won Big.

Our most recent columns: Justice For George Floyd Helps Heal Our Shaken Faith, But Fight For Equality Goes On  /  What Would Jackie Robinson Think About Race In America Today?  /  The Case For Dolphins Trading Up, Going All-In For Kyle Pitts  /  and It Won't Fix the World, But Matsuyama's Masters Win Lifts Japan In Time Of Anti-Asian Hate.

Select other recent columns: Talk Of U.S. Olympic Boycott A Reminder Sports, Politics Are Entwined -- And That's Good / How And Why the Miami Heat Landing Kawhi Leonard This Summer Could Happen / The Miami Dolphins' Six Can't-Lose Options For a Great No. 6 Pick in NFL Draft / Even After Playoffs In '20, Marlins Still 'Bottom Feeders' Fighting For Respect / Special Opening Day as Marlins Welcome Back Fans, Feeling Of Hope / In History And In Hearts, Howard Schnellenberger Will Matter For All Time / No Lowry, But Stealing Oladipo, Keeping Herro a Win-Win For Heat, Riley / Beckham Keeps Name-Dropping Messi, Ronaldo For Inter Miami. Can He Deliver? / Women Keep Accusing Deshaun Watson of Sexual Misconduct. But Will It Matter to NFL Teams? / No-Splash Free Agency Indicates Dolphins Going All In On Upcoming Draft -- And Tua / Phil Reflects on 25-Year Rivalry/Friendship With Tiger As Honda Classic Tees Off / Why Men's NCAA Tournament Has A Needed Fresh Feel As We Welcome Back March Madness / Reality, Loss, Comeback: How Sports Has Been Guiding Light In America's Awful Past Year / Heat Should Parts Ways With Meyers Leonard Over Anti-Semitic Slur / Beckham's Resolve Tested By Tumult As Inter Miami Nears 2nd MLS Season / Time-Travelling To 1960s And Childhood, When The Baseball Card Was King / Quit Lecturing LeBron On Activism And His Own Conscience / Dolphins' Tua-or-Deshaun QB Choice Strewn with Complications and What-Ifs / Michael Jordan, Pitbull Signal Needed New Era as NASCAR Returns to Homestead / Doesn't Matter If Tiger Woods Never Wins Again. We Are Lucky He's Alive / Loss at Aussie Open Leaves Serena's Legacy Firm Yet Still Unfinished / Marlins Stick With Youth As Rest Of NL East Spends Big / Inter Miami's Beckham Risks Stepping Into Massive, Avoidable Mess / Put Brady In Sports' All-Time Pantheon. But He Has Company / Why Schilling Is To Blame For Falling Short Of Hall / Final Herald NFL 2020 QB Rankings / Le Batard Leaving ESPN, But Assures Fans They'll Hear From Him Again Soon / Marlins Hit History-Making Home Run With Kim NG Hire As GM / In a Pandemic-Battered Season For FIU, Butch Davis' Love Of Coaching Survives / Stop the Silly Noise And Speculation. Give Dolphins' Tua Time And Fair Chance / Fans of ESPN's Dan Le Batard Show With Stugotz Should Prepare For Another Change / Don Shula, 1930-2020, R.I.P. / What Shula Meant to a Father & Son. The Boy Was Me / and Goodell's NFL Response to Floyd Killing Is Hypocrisy At Its Most Ironic.