GREG COTE SHOW PODCAST: NEW EPISODE WITH RICKY WILLIAMS OUT NOW!: On the heel of last week's 1st Anniversary episode, our new 10th podcast of 2021 and 52nd overall is out now it features former NFL and Dolphins star Ricky Williams! A new pod drops every Monday morning on Apple, Spotify, Google, Stitcher, Megaphone, iHeart -- wherever you pod, and of course at MiamiHerald.com. You can find all 52 we've done so far HERE for free. In our new Ep10 of '21, we catch the enigmatic, mercurial Ricky in a good mood in a illuminating conversation that touches on football, astrology, cannabis, Le Batard and more. Also on the menu: Cap'n Crunch, LeBron vs. Zlatan, knees to the head in UFC, the new Mount Gregmore (Chris hates it as usual) and more. Ricky Williams was great so don't miss this new episode! Thanks as always, pod family, for the support. Please listen, subscribe, rate and review! (Also, our pod now simulcasts on Sirius XM, Mondays 5-6 p.m. ET on Channel 145).

REALITY, LOSS, COMEBACK: HOW SPORTS HAS BEEN GUIDING LIGHT IN AMERICA'S AWFUL PAST YEAR: It got real for a lot of us when the basketballs stopped bouncing and the sneakers stopped squeaking. When arenas were full of cheering fans one night and empty and dark the next. It was one year ago. That is when everything changed, when that strange new word, “coronavirus,” entered our lives, the invisible deadly plague not knocking but kicking in our doors, and sports had little choice but to surrender. The role of sports in helping America get through this tragic past year is remarkable, and not spoken of enough, because it is our collective national pasttime — us, loving our teams and games — that led us by the hand. Sports first told us how serious this was. Then made us miss so dearly what was a very part of our fabric. Now sports is out front in the careful, gradual progress toward normalcy again. The past year has been devastating for our pro leagues and colleges in terms of revenue, but what our teams and games mean in our lives and hearts nourishes the future of sports. Being forced to miss them, to miss part of the taken-for-granted rhythm of our lives, has defined and steeled the depth of our love. For our full latest column, visit Reality, Loss, Comeback: How Sports Has Been Guiding Light In America's Awful Past Year.

IT ISN'T 'CANCEL CULTURE', IT'S RIGHT: HEAT SHOULD PART WAYS WITH LEONARD OVER ANTI-SEMITIC SLUR: Life had been so good lately for Miami Heat player Meyers Leonard. One month ago to the day he and wife Elle closed on a $7.8 million, near-7,000-square foot mansion in Miami’s tony eastside community of Bay Point. They were excited about the protein-bar business they’d started. They celebrated Valentine’s Day, and later in February, Meyers’ 29th birthday. Leonard has been sidelined all but three games with a season-ending shoulder injury, but, hey, if the worst thing in your life is that somebody is paying you very well to not work, well, life is good. It all ended for him this week in the dumbest of ways. The end of his time with the Heat, surely — and of his NBA career, perhaps? — was broadcast on a livestream on Twitch. Heard by many, now known by most thanks to the metastasizing power of social media. (I might suggest a basketball player out injured all season but livestreaming himself playing video games is a loser on optics alone. But Leonard had a far bigger problem at hand...) He was playing “Call of Duty: Warzone,” and when angered by his opponents’ actions, Leonard was heard saying: “F---ing cowards, don’t f---ing snipe me, you f---ing k--- b----.” That second-to-last K word that rhymes with bike is a well-known and strongly condemned slur against Jewish people, who hear it with the hurt and hate and anger a Black man might hear the N-word. It was Tuesday when Leonard’s world blew up. The Heat (with a substantial Jewish fan base, and owned by Micky Arison, born in Tel Aviv, Israel) immediately suspended Leonard indefinitely, saying it vehemently condemns the use of any form of hate speech, and adding, “To hear it from a Miami Heat player is especially disappointing and hurtful.” But have we seen an overreaction or an appropriate one? The answer is clear. For our full recent column, visit Heat Should Parts Ways With Meyers Leonard Over Anti-Semitic Slur. 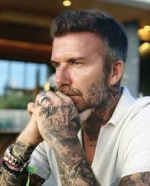 DAVID BECKHAM'S RESOLVE TESTED BY TUMULT AS INTER MIAMI SOCCER TEAM NEARS 2ND MLS SEASON: If Inter Milan vs. Inter Miami sounds like a legal proceeding more than a game between two teams, it’s because it is. It’s no game when trademark lawyers are involved in a costly international dispute with potentially far-reaching implications. This competition is happening not on a field, but in a court; i.e., the U.S. Patent and Trademark Office. Who owns “Inter” as a stand-alone description? It seems such a silly dispute over a rather strange word. When are those two syllables ever uttered in conversation except in reference to the established Italian club or the newer one in Major League Soccer. What does “inter” even mean? For fun, I googled the definition. Here is what comes up first: Verb. To place a corpse in a grave or tomb, typically with funeral rites. “He was interred with the military rites due to him.” Inter is more commonly seen as a prefix meaning between or among. As in interactive or intermediate. In any case, David Beckham’s Miami team having to fight for its very name is such a perfect example of the snakebit, nearly cursed manner in which this franchise taxied and took off. Inter Miami is in training camp now preparing for its second MLS season. Preseason games begin March 20 and the regular season April 17. Nothing has been easy getting to this point. Almost everything has gone wrong. For our full recent column, visit Beckham's Resolve Tested By Tumult As Inter Miami Nears 2nd MLS Season.

Baseball cards, LeBron, Dolphins: Our other most recent columns: Time-Travelling To 1960s And Childhood, When The Baseball Card Was King / Quit Lecturing LeBron On Activism And His Own Conscience and Dolphins' Tua-or-Deshaun QB Choice Strewn with Complications and What-Ifs. Other recent columns: Michael Jordan, Pitbull Signal Needed New Era as NASCAR Returns to Homestead / Doesn't Matter If Tiger Woods Never Wins Again. We Are Lucky He's Alive / These Two Questions Will Determine Dolphins' Path On Watson Vs. Tua / Loss at Aussie Open Leaves Serena's Legacy Firm Yet Still Unfinished / Marlins Stick With Youth As Rest Of NL East Spends Big / Oh Say Can You See No Anthem At Games? We Weigh In / Inter Miami's Beckham Risks Stepping Into Massive, Avoidable Mess / and Put Brady In Sports' All-Time Pantheon. But He Has Company.

Select other recent columns: Why Schilling Is To Blame For Falling Short Of Hall / Why A Brady-Mahomes Super Bowl Is Torture For Dolphins Fans / Chad Henne: Ex-Dolphin An Overnight Sensation, 13 Years Later / Final Herald NFL 2020 QB Rankings / Saban the New G.O.A.T. as Alabama Reigns in Miami / Promising Season For Dolphins, Tua Ends In Crushing Collapse/ 'A' For Effort, But King Hurt As Hurricanes' Bowl-Woes Continue / The King Is Dead! Dolphins Win Signals End of Era For Belichick, Pats / Heat Are Getting No Respect, But Didn't Earn Much In Opener / Le Batard Leaving ESPN, But Assures Fans They'll Hear From Him Again Soon / Marlins Hit History-Making Home Run With Kim NG Hire As GM / In a Pandemic-Battered Season For FIU, Butch Davis' Love Of Coaching Survives / Stop the Silly Noise And Speculation. Give Dolphins' Tua Time And a Fair Chance / Fans of ESPN's Dan Le Batard Show With Stugotz Should Prepare For Another Change / Turner, With COVID, Joining Dodgers Celebration A Sadly Fitting End to Season  / Heat, Marlins, Canes -- now Tua. Miserable 2020 Suddenly Great Time To Be Miami Fan / Boycott Of NBA Playoffs Shows Nation That Injustice Is Bigger Than Sports Right Now / As Panthers Move on From Tallon, Who's Next Miami Team Executive on Hot Seat? / 'Perfect Storm For Virus Transmission': Why Football Is Struggling to Lift Off / Marlins Delaying Home Opener For COVID Outbreak a Scary Lesson For All Sports / Don Shula, 1930-2020, R.I.P. / What Shula Meant to a Father & Son. They Boy Was Me / It Took George Floyd To Finally Wake Up White America / Goodell's NFL Response to Floyd Killing Is Hypocrisy At Its Most Ironic / and George Floyd Is Why Kaepernick & Sports Must Continue Fight For Social Justice.