Time-travelling to '60s and childhood, when the baseball card was king. My new column; plus Quit lecturing LeBron on activism and How Dolphins' Tua-or-Deshaun choice is strewn with what-ifs; also, new Greg Cote Show 1st anniversary podcast & more

GREG COTE SHOW PODCAST: NEW 1ST ANNIVERSARY EPISODE OUT NOW!: Our Miami Herald podcast debuted last March and our 1st Anniversary episode -- ninth of 2021 and 51st overall -- is out now! A new pod drops every Monday morning on Apple, Spotify, Google, Stitcher, Megaphone, iHeart -- wherever you pod, and of course at MiamiHerald.com. You can find all 51 we've done so far HERE for free. In our latest Ep9 of '21, we welcome in two special guests. Dr. Daniel B. Chan, an orthopedic trauma surgeon for Memorial Healthcare System, details Tiger Woods' injuries and what's ahead in his recovery -- and explains why what Woods suffered may be even worse than the injury to NFL quarterback Alex Smith. Also, ESPN NFL analyst Mike Tannenbaum joins us to predict how the whole Tua-or-Deshaun Watson drama will play out for the Dolphins. Also on the menu: Greg and Chris discuss the raging new Mr. Potato Head controversy; a smidgen of NASCAR talk (involving Michael Jordan and Pitbull); a debate over the move to make Kobe Bryant the new silhouette in the NBA logo; and a new Mount Gregmore marking the pod’s 1st anniversary with the greatest events or birthdays associated with March 2. Thanks as always for the support. Please listen, subscribe, rate and review! 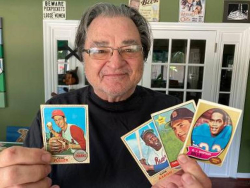 TIME-TRAVELLING TO CHILDHOOD IN THE 1960S, WHEN THE BASEBALL CARD WAS KING: The evolution of sports memorabilia, of collectibles, struck me this week as I discovered for the first time a phenomenon of a fad called NBA TopShot. I’m closer to a Luddite than someone out front on the latest trends , so it was no surprise I’d been unfamiliar with these so-called “digital basketball cards.” I happened to learn of NBA TopShot on the same week I’d been immersed in my garage, rooting through large plastic storage tubs, in search of something long-lost: My youth. And there they were, stacked in old shoeboxes: Hundreds and hundreds of baseball and football cards, almost all of them from the 1960s. At a time when the Beatles and Motown were America’s soundtrack and LBJ was in the White House, I was a card collecting fool. Obsessed. You’d buy a pack of Topps cards (I was a Topps kid) and couldn’t wait to get home and unwrap the mystery. Odds were they’d be ordinary players. Oh, but what if you struck gold and Mickey Mantle was there. Or Willie Mays! I collected cards nonstop from the early ‘60s into the early ‘70s, elementary school into the start of high school.More than a half-century later, this week, I discovered those old shoeboxes were falling apart but the long- forgotten treasure they held — those 3 1/2 by 2 1/2-inch rectangles of thin cardboard — were miraculously intact, not all but many in what the collectible experts might call mint condition. For our full latest column, visit Time-Travelling To The 1960s And Childhood, When The Baseball Card Was King. 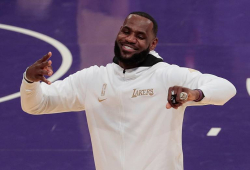 QUIT LECTURING LEBRON JAMES ON ACTIVISM AND HIS OWN CONSCIENCE: LeBron James is hearing the silly noise again, and all it does is make him dig deeper, stand firmer, speak louder. One year ago it was conservative commentator Laura Ingraham on Fox News advising LeBron to “shut up and dribble” instead of speaking out against racial and social injustice. Now it is international soccer superstar Zlatan Ibrahimovic lecturing LeBron on what the parameters of his conscience should be. “[LeBron] is phenomenal at what he does, but I don’t like when people have some kind of status, they go and do politics at the same time,” the AC Milan striker said in an interview in Sweden. “Do what you’re good at. Stay out of politics. Just do what you do best because [the rest] doesn’t look good.” Politics. When did that become the word for standing up for what you believe is right? Why has speaking out for social justice and voters’ rights become a font of controversy? Ibrahimovic doubled down this week, saying, “Athletes unite the world, politics divide us “ — again misrepresenting social conscience as political, in much the same way critics misrepresented Colin Kaepernick kneeling during the anthem as anti-American instead of as a protest of police violence against unarmed Black people. Ibrahimovic reopens the dumb notion of “stick to sports!” as more and more athletes, the L.A. Lakers’ LeBron seemingly always at the forefront, use their platform and voice for positive change. The message from activist athletes is simple: We are here to do more than entertain you. For our full recent column, visit Quit Lecturing LeBron On Activism And His Own Conscience. 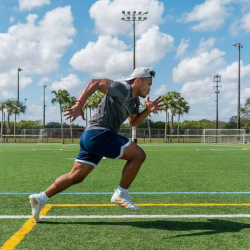 TUA OR DESHAUN? WHY DOLPHINS' MONUMENTAL QB CHOICE IS ANYTHING BUT SIMPLE: Miami Dolphins owner Stephen Ross, general manager Chris Grier and coach Brian Flores are seated in a room, trying to see the future. Trying to chart a path. NFL free agency starts March 17. Less than six weeks later is the draft. Most offseasons, those are the two superhighways you travel in building your roster. Improving your team. This offseason, the Dolphins front office faces a bigger decision, of course. The biggest of their professional lives. The biggest in the 56-year history of Miami’s flagship sports franchise. It is Tua Tagovailoa or Deshaun Watson, and nothing at all about that choice is simple. Stick with Tagovailoa and use free agency and the draft to surround him with talent and you have passed on the once-in-a-lifetime chance to trade for a proven, elite quarterback just coming into his prime. Trade for Watson and you have both gutted your draft capital for perhaps years to come and also given up on the great promise of the player you just used a top-five pick to draft. Ah, but the choice is even more complicated than that, and strewn with possibilities Ross, Grier and Flores must consider when deciding how to move forward. For our full recent column, visit Dolphins' Tua-or-Deshaun QB Choice Strewn with Complications and What-Ifs.

NASCAR/Homestead, Tiger Woods and other most recent columns: Michael Jordan, Pitbull Signal Needed New Era as NASCAR Returns to Homestead This Week and Doesn't Matter If Tiger Woods Never Wins Again. We Are Lucky He's Alive. Also: These Two Questions Will Determine Dolphins' Path On Watson Vs. Tua / Loss at Aussie Open Leaves Serena's Legacy Firm Yet Still Unfinished / Marlins Stick With Youth Blueprint As Rest Of NL East Spends Big / Oh Say Can You See No Anthem At Games? We Weigh In / Inter Miami's Beckham Risks Stepping Into Massive, Avoidable Mess / and Put Brady In Sports' All-Time Pantheon. But He Has Company.

Select other recent columns: Why Schilling Is To Blame For Falling Short Of Hall / Why A Brady-Mahomes Super Bowl Is Torture For Dolphins Fans / Chad Henne: Ex-Dolphin An Overnight Sensation, 13 Years Later / Final Herald NFL 2020 QB Rankings / Saban the New G.O.A.T. as Alabama Reigns in Miami / Promising Season For Dolphins, Tua Ends In Crushing Collapse/ 'A' For Effort, But King Hurt As Hurricanes' Bowl-Woes Continue / The King Is Dead! Dolphins Win Signals End of Era For Belichick, Pats / Heat Are Getting No Respect, But Didn't Earn Much In Opener / Le Batard Leaving ESPN, But Assures Fans They'll Hear From Him Again Soon / Marlins Hit History-Making Home Run With Kim NG Hire As GM / In a Pandemic-Battered Season For FIU, Butch Davis' Love Of Coaching Survives / Stop the Silly Noise And Speculation. Give Dolphins' Tua Time And a Fair Chance / Fans of ESPN's Dan Le Batard Show With Stugotz Should Prepare For Another Change / Turner, With COVID, Joining Dodgers Celebration A Sadly Fitting End to Season  / Heat, Marlins, Canes -- now Tua. Miserable 2020 Suddenly Great Time To Be Miami Fan / Boycott Of NBA Playoffs Shows Nation That Injustice Is Bigger Than Sports Right Now / As Panthers Move on From Tallon, Who's Next Miami Team Executive on Hot Seat? / 'Perfect Storm For Virus Transmission': Why Football Is Struggling to Lift Off / Marlins Delaying Home Opener For COVID Outbreak a Scary Lesson For All Sports / Don Shula, 1930-2020, R.I.P. / What Shula Meant to a Father & Son. They Boy Was Me / It Took George Floyd To Finally Wake Up White America / Goodell's NFL Response to Floyd Killing Is Hypocrisy At Its Most Ironic / and George Floyd Is Why Kaepernick & Sports Must Continue Fight For Social Justice.