GREG COTE SHOW PODCAST: NEW EPISODE 34 OUT NOW!: Our Miami Herald podcast debuted in March and the new Episode 34 is out now! A new pod drops every Monday morning on Apple, Spotify, Google, Stitcher, Megaphone, iHeart -- wherever you pod, and of course at MiamiHerald.com. Find all 34 we've done so far RIGHT HERE for free. Please listen, subscribe, rate and review. In new Ep34, myself and Chris engage in a sometimes contentious debate over the Dolphins quarterback-change drama, Chris reveals his first career parenting faux pas, and we offer a new edition of 'Greg Doesn't Know Movies.' And of course a new Mount Gregmore, too -- the Q's. Hear all that and more on the new Greg Cote Show podcast! 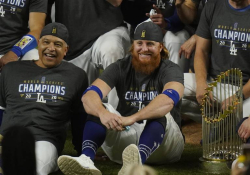 SELFISH JUSTIN TURNER -- WITH COVID -- JOINING DODGERS CELEBRATION A SADLY FITING END TO SEASON: Baseball’s World Series gave us an absolutely perfect ending to the 2020 season, the strangest of all time. It was not perfect from a baseball standpoint, except of course to a Los Angeles Dodgers team winning it all for the first time in 32 years, since Orel Hershiser and Kirk Gibson. No, it was a perfect ending as a mirror on America in this year of the spread of the COVID-19 virus. The final images of the season reflected so damned accurately a country literally playing in a pandemic, and not taking seriously enough a plague whose American death toll on Wednesday stood around 227,000. And climbing. We should be talking today about the Dodgers finally getting over the hump to win the franchise’s first World Series since 1988. About L.A. celebrating yet again just 17 days after the Lakers won the NBA Finals. We should be talking baseball and second-guessing the manager! Can you believe Tampa Bay’s Kevin Cash giving the early hook to Blake Snell when Snell was dominating? Over-managing gone way wrong. Instead, we must talk about what is more important, and what kicks dirt on the Dodgers’ triumph: Justin Turner and his outrageous selfishness. (The literal grinning fool, in the red beard, is pictured). For our full latest column, visit Turner -- With COVID -- Joining Dodgers Celebration A Sadly Fitting End to Season. 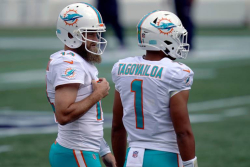 DRAMA, CONTROVERSY, TORQUED-UP PRESSURE: WELCOME TO TUA WEEK IN MIAMI: In ways ceremonial and real, Monday began the Tua Tagovailoa Era in Miami. Let’s capitalize era for added gravitas — such are the expectations, pent up around here for 20 years, ever since we said goodbye to to Dan Marino and waited (and waited) for another like him. We will know by degrees over time whether Tua possesses that potential. We have had but a two-minute blink. The first real hint comes with his first start this coming Sunday against the visiting Los Angeles Rams. This week would have been one of great anticipation maybe tinged with trepidation under any circumstances. Is the kid ready? After two NFL minutes and two short passes? Dial back to 1983 and remember that Marino, before his first start, had seen extensive action in two games, completing 23 of 39 passes for 240 yards, three touchdowns and one interception. That after the full preseason that Tagovailoa was denied by the COVID pandemic. (And Marino did not bear the shadow of injury history, of hip surgery). But to all of that already entailed in Tua Week, we added something expected. We add elements of drama, pressure, even controversy. All of that is courtesy the man benched to make way for Tagovailoa, the veteran Ryan Fitzpatrick. He has caused this not with malice or ill intent, but with plain, raw honesty. For our full recent column, visit Drama, Controversy, Torqued-Up Pressure: Welcome to Tua Week In Miami.

NFL PIX 'N FANTASY: WEEK 7 RESULTS: NFL Pix--Ouch!: Went 9-5 straight-up this past week. Can live with that. Went 5-9 against the spread. Can head straight to the poorhouse with that. Our worst week yet ATS, by a lot. Had a few nice hits, including Pittsburgh's mini upset at Tennessee, and 'dogs-with-points covers by Panthers and Jets. Also had some bad luck with blown leads and near misses. Still, no excuses for three what-was-I-thinking picks: Texans over Pack, Cowboys over Washington and Pats over Niners. Somebody slap me. Glad you're with us on our 30th season of picks in the Herald. Promise a big bounceback week. Greg's Lobos: Ouch 2.0: Lobos had been hot. Man did that end. 'Bos got clobbered 127-73 to fall to 4-3 in PFPI Fantasy, our friends 'n family 10-team PPR league. Hard to win when your top scorer with 18 points is newly signed Matthew Stafford. We were scrambling, with Dak Prescott lost for the year, two starters on byes and Michael Thomas and Aaron Jones both injured. The good news? Still tied for 3rd in hunt for four playoff spots!

NEW 'BACK IN MY DAY': POTATO CHIPS!: Fresh out the oven, this one. Premiered earlier today on the Le Batard Show on ESPN Radio and TV. Hope you enjoy:

Posted by Greg Cote 10/29/2020 at 08:45 AM in Back In My Day, Baseball, Coronavirus, Dolphins, ESPN, Fantasy, Friday NFL Picks, LeBatard, Me, Radio, The Greg Cote Show podcast | Permalink