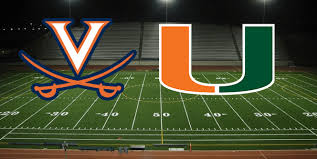 G6: VIRGINIA (1-3) AT NO. 11 HURRICANES (4-1): FAVORED MIAMI IN 'NO STUMBLE ZONE' VS. CAVALIERS: 'No Stumble Zone' means UM will have a fighting chance to reach the ACC Championship Game if it runs the table from here and does not take a second conference loss. That is because Clemson and Notre Dame, the only unbeaten ACC teams, play each other Nov. 7 in South Bend. But a second league loss would severely damage Canes hopes. Virginia, tonight's 8 o'clock opponent at Hard Rock Stadium, should not be a problem, and yet Miami is but a 12 1/2-point favorite -- a rather modest line for a No. 11 team at home vs. a 1-3 visitor. That could be because Cavaliers-Canes has been tight recently. Miami won at home last season 17-9, and lost the year before on the road 16-13. Miami may be without injured tight end Brevin Jordan (shoulder) again, but also could catch a break by not facing the opponent's starting quarterback for a second straight game. UVA's Brennan Armstrong (concussion) was uncertain to be available. Virginia averages almost 50 passes a game, so missing it starter would really hurt. For Miami, as with last week's game vs. Pitt, this is a should-beat opponent but hardly one to be taken casually. Or looked past -- with three ranked opponents in the five games left after this. 'No Stumble Zone,' remember? My pick: Hurricanes 30-16.

Other state FBS games this week:

Jacksonville State 19, @ FIU 10: Ouch. This hurts. Bad. Panthers were favored by 10 12 Friday night over their FCS-level foe from Alabama but FIU's offense was dominated. It's been a miserable season so far from coach Butch Davis (pictured). Off the field, he's seen three games postponed by COVID issues. On the field, he can't find a quarterback who's able and just fell to 0-3. ESPN's Football Power Index had put FIU's win likelihood at 80.2 percent. This was an embarrassing home defeat.

Florida State (2-3) at Louisville (1-4), noon Saturday: Cardinals a 5-point home fave. But which FSU team will show up?

GREG COTE SHOW PODCAST: EPISODE 33 OUT NOW!: Our Miami Herald podcast debuted in March and the new Episode 33 is out now! A new pod drops every Monday morning on Apple, Spotify, Google, Stitcher, Megaphone, iHeart -- wherever you pod, and of course at MiamiHerald.com. Find all 33 we've done so far RIGHT HERE for free. Please listen, subscribe, rate and review. In new Ep33, 'Growing Up Cote II,' we welcome back my older brother for Uncle Dick 2.0. He makes fun of explains the phenomenon of PFPI and the PFPI Gala, shares how Greg is so odd on a golf course, and reveals what he really thinks about how Dan Le Batard treats his little brother on the air. Also, Greg and Chris chat up Tua's long-awaited Dolphins debut. A new Mount Gregmore, too -- the P's. Hear all that and more on the new Greg Cote Show podcast!

OUR NFL WEEK 7 PICKS: STEELERS-TITANS UNBEATEN BOWL, 3 UPSETS, DOLPHINS' THRILL-RIDE BYE WEEK: The Week 7 picks marquee is topped by our call on the Steelers-Titans battle of 5-0 teams, along with three upsets including one major one. We also delve into the Dolphins' anything-but-quiet-and-tranquil bye week. This is our 30th season of NFL picks in the Miami Herald, and thanks for joining us on the ride! For our Week 7 previews and picks for our Game of the Week, Upset of the Week and all the rest of the 14-game slate, visit NFL Week 7 Gems. Our week got off to a mixed start Thursday night. We rightly called the Eagles win over the Giants, but thought Birds would also cover the 4 1/2-point line and they let us down on that. Our picks appear Thursday afternoons every week online, and Fridays in print. (Thursday night picks appear Wednesdays online and Thursdays in print).