GREG COTE SHOW PODCAST: NEW EPISODE 33 OUT NOW!: Our Miami Herald podcast, The Greg Cote Show With Greg Cote, debuted in March and the new Episode 33 is out now! A new pod drops every Monday morning on Apple, Spotify, Google, Stitcher, Megaphone, iHeart -- wherever you pod, and of course at MiamiHerald.com. Find all 33 we've done so far RIGHT HERE for free. Please listen, subscribe, rate and review. In new Ep33, 'Growing Up Cote II,' we welcome back my older brother for Uncle Dick 2.0. He makes fun of explains the phenomenon of PFPI and the PFPI Gala, shares how Greg is so odd on a golf course, and reveals what he really thinks about how Dan Le Batard treats his little brother on the air. Also, Greg and Chris chat up Tua's long-awaited Dolphins debut. A new Mount Gregmore, too -- the P's. Hear all that and more on the new Greg Cote Show podcast! 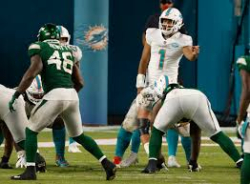 WHY MIAMI DOLPHINS TURNING TO ROOKIE QB TUA NOW IS RISKY TIMING -- BUT THE RIGHT NOVE: The scene: Bourbon Street in New Orleans at the height of Mardi Gras, pre-pandemic. The boulevard is packed with revelers, beads are flying. It’s an undulating, nonstop party. And there’s that one guy on a milk crate with a bullhorn, warning all of the sinners to repent. The Miami Dolphins quarterback change as reminded me a little of that. The vast majority of Dolfans are in party mode, cheering the elevation of rookie Tua Tagovailoa to the starting job. Beads and hope are flying. I’m old enough to have been at the very first Dolphins expansion game with my Dad in 1966, know this franchise better than I know any other, and I have not felt the fan base this excited in 20 years. Not since Dan Marino. Ah, but there is that one segment of fan on that mile crate with a bullhorn, shouting, “But why now!?” Miami has won two in a row and three of the past four to get to 3-3 and join the NFL playoff hunt — all under the able aegis of veteran QB Ryan Fitzpatrick and his glorious Viking beard. Take a photo of the standings for posterity because hallelujah the Fins are above the New England Patriots. Is now the time to hand the ball to a rookie whose 2 minutes 27 seconds of NFL experience came in Sunday’s garbage time against the Jets? Short answer: Yes. Make that: YES! For my full most recent column, go to Dolphins Turning to Tua Now Is Risky -- But Right Move.

HEAT, MARLINS, CANES, NOW TUA. MISERABLE 2020 SUDDENLY A GREAT TIME TO BE A MIAMI FAN: The sun had just set when hope began rising. An October Sunday at Hard Rock Stadium, late in the game and the future is rising up off the bench, warming up on the sideline. Fans in the spaced-apart, pandemic crowd of 10,772 were rising up, too, with a cheer that became an ovation. That joyous noise, pent up for how long? Years? Two decades? Maybe ever since Dan Marino limped off a football field for the last time on January 15, 2000? That big noise the small crowd was making — it was the sound of the future arriving, becoming real. “Tua! Tua! Tua!” All of a sudden, it seems, what a time it is to be a sports fan in South Florida. It has been a so-depressing 2020, sustained misery, the COVID-19 death toll now past 220,000 in America and cases spiking anew. Social unrest, political divide, even the common ground of shared values seeming to run away from us. It is strangely in this oppressing context that Miami sports has pushed through and picked curses 2020 to create such an exhilarating ride. We all needed a lift? We got one. For my full recent column, visit Heat, Marlins, Canes -- now Tua. Miserable 2020 Suddenly Great Time To Be Miami Fan. [My column off Fins win over Jets: For Dolphins, 4th Straight Good Game -- And Tua, Too!]

NFL PIX 'N FANTASY: WEEK 6 RESULTS: NFL Pix--We took our hits: Went 7-7 straight-up in Week 6, never OK under any circumstance. Also went 7-7 against the spread, which is decent, at least. Example of our struggles: Had Texans over Titans in our Upset of the Week. Texans lead by seven with less than two minutes left. Texans lose in OT. Had the right idea, jus needed Houston to close it out. Had a trip of 'dogs-with-points in covers by Broncos, Eagles and 49ers. Glad you're with us on our 30th season of picks in the Herald. Onward and upward! Greg's Lobos: Hot 'Bos win again!: Lobos won yet again to improve to 4-2 in PFPI Fantasy, our friends 'n family 10-team PPR league. We're on playoff pace as we near midseason. This win was unexpected, 89-88. We were dead in the water but got 36 big points Monday night including 20 from Amari Cooper. The miracle of 4-2 is that we've done almost all of it wthout top draft pick Michael Thomas. Now we've lost starting QB Dak Prescott. Can the underdog Lobos keep it up? Stay along for the ride and find out!