every Monday morning on Apple, Spotify, Google, Stitcher, Megaphone, iHeart or wherever you do your podding, and of course at MiamiHerald.com. Find all 19 we've done so far RIGHT HERE. Free! No paywall! Please listen, subscribe, rate and review. In Episode 19 we chat with the University of Miami's new Chief Diversity Officer for athletics, Dr. Renae Myles Payne, whose job takes on magnified relevance as America protests for social and racial justice. She talks about the anger, frustration and fear of many of her own Hurricanes athletes. For the fun  stuff, we bring you the latest installment of Greg Doesn't Know Movies, plus the Mount Gregmore Name Game B edition. Greg also talks Tuscaloosa COVID-19 parties and the (supposed) return of sports. Here it all in the new pod now!

'REDSKINS' IS A RACIST, PEJORATIVE NICKNAME BASED ON A LIE. TIME FOR IT TO DISAPPEAR: The money is talking now. You can ignore logic and even turn a deaf ear to conscience, but when the money starts talking, you must listen. The Washington Redskins’ nickname has no chance to survive what is happening. It has long been an offensive, racist, 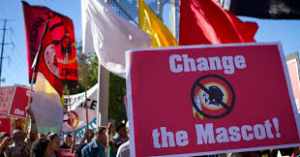 pejorative anachronism beyond any real argument, but only now is it falling like a Confederate statue. No matter how much longer Redskins owner Dan Snyder pretends to dig in and defend the nickname, it does not have a chance. Mammoth retailers including Amazon, Walmart, Target, Nike and Dick’s Sporting Goods have eliminated Redskins merchandise from their websites. Now FedEx — whose name is on the NFL club’s suburban Maryland stadium — officially requested a nickname change. The franchise plans to build a new stadium and move within the D.C. city limits to better suit its first name, Washington, but officials there say it won’t if Redskins remains. Snyder is being backed into a corner with no way out. It seems only a matter of time before the commissioner Roger Goodell and the NFL itself demand the change, the new impetus for which is borne of the national attention to race relations, fairness and justice in the wake of the George Floyd killing. The NFL has announced itself as woke by standing behind Black Lives Matter and (albeit four years late) supporting the Colin Kaepernick-led anthem kneeling representing a demand for social justice. Goodell must know that not entering the fray against the Redskins name is giving it tacit approval. This week it is reported the Redskins will remove all Native American imagery from the franchise. That’s a start. Of course that start must end with a different nickname altogether. Now. Before the 2020 season starts (presuming the coronavirus/COVID-19 pandemic allows one). Redtails, the choice of Washington quarterback Dwayne Haskins, is the betting favorite at 3-1 odds. Other possibilities at 10-1 or better: Generals, Presidents, Lincolns, Veterans, Capitols, Americans, Memorial, Monuments. "Anything but Redskins" is the point. To read our full latest column, please visit 'Redskins Is Racist Nickname Based On a Lie. Time For It to Disappear.

AS OTHER SPORTS RESUME AMID PANDEMIC, DO NFL AND COLLEGE FOOTBALL HAVE THE HEART TO BE SMARTER?: The Ivy League, the high-brow conference of Harvard and Yale, last claimed a national championship in football in 1927, when you could buy a new Ford Model A Roadster for $385. Ivy League teams appear in the Top 25 about as often as Halley’s 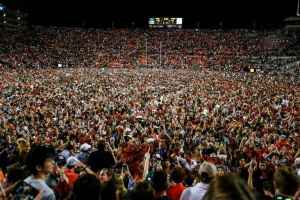 Comet appears in the sky. Yet the the Ivy League, where "student-athlete" actually still describes the priority, had the attention of all of college football Wednesday. It is because, in the void of definitive answers to the question, we are all looking for harbingers and hints. Signs. Will there be college football in the fall? Will there be pro football? Will it be on time, or delayed perhaps even to the spring? Will schedules be reduced? Will stadiums be full (as pictured), empty or somewhere in the great in between. Small signs emerge. The Division 3 Centennial Conference just suspended all fall sports for 2020, notably including football, due to growing concerns over a coronavirus pandemic not nearly contained and, in much of the United States, surging anew. Wednesday the Ivy League announced no sports will be played until January 2021, and the major Power 5 conferences were watching as they weigh their own path forward. If reports are accurate the Ivy League is headed for a reduced-schedule 2020 football season to be played in the spring of ‘21. Clearly, small-college football does not rule campuses and coffers the way it does in the Southeastern Conference, Atlantic Coast Conference and other giant leagues that rely on football revenue to primarily sustain their entire athletic budgets. The Centennial Conferences and Ivy Leagues et al have the luxury to make decisions with health and safety a dominant priority or even the only one. So should the Power 5 leagues and the NFL, obviously, but it isn’t that simple for them. They must marry their health-related concerns with the imperative of, well, money. It makes for an awkward marriage. A dangerous one, too. To read our full recent column, please visit Money Or Health? NFL and Major College Football Face A Decision.

NEED SOME FEEL-GOOD DURING TOUGH TIMES, FANS? LOOK TO THE RALLY AND RISE OF MIAMI SPORTS: Outside of my window today: Only bright skies, a cool breeze and three little birds telling me don’t worry ‘bout a thing ‘cause every little thing gonna be all right. The heart sings with optimism! I am trying to see if I can pull this off, folks. I have my doubts. For reasons nearly medicinal I need to write a column seeing nothing but the bright side and the glass half full ... of Moet & Chandon! Call this exercise my armor against the relentless gauntlet that has been life in America the past four months. A deadly coronavirus/COVID-19 pandemic that is only growing again because far too many in our country are too selfish or stupid to wear a mask and avoid crowds. Racial tension amid national protests demanding social justice in the wake of George Floyd and too many other unwarranted killings by police. It is a challenge to our national conscience, mettle and resolve such as I have not seen in my lifetime. Sports to the rescue as a diversion from the headlines? Not so much. Sports have been shut down by the virus since March. Now they attempt to inch back this month, but amid the pitfalls of players opting out and testing positive — reminders of the mess we’re in as we wonder if the games will soon shut down again just like the restaurants in Miami-Dade County have. Against everything bleak and depressing, I am here to offer a big fat slice of sunshine. I am Gene bleepin’ Kelly not only singin’ in the rain, but dancing in it, too. Brighter days are here or ahead in Miami professional sports. A corner is turned. A landscape barren too long begins to bloom. Winning looms. For all five of our major pro teams, optimism fits like one of Pat Riley’s Armani suits. (The Heat's Jimmy Butler and Bam Adebayo are pictured, as an example). For our full recent column, a team by team snapshot of reasons for the optimism, please visit Tough Times All Around, But Rise Of Miami Sports Offers Hope.

THE FACE OF MIAMI SPORTS IN 2020. OUR TOP 20: In our previous column we decide who is the face of Miami sports in 2020 among current athletes from our five major pro teams: Dolphins, Heat Marlins, Panthers and Inter Miami. Not a simple, or inarguable, answer. We list our Top 20 choices and arrive at a No. 1 that may surprise you. (As for your choice, we had a Twitter poll listing four choices, the max allowed, and your vote was Tua Tagovailoa 52.6 percent, Jimmy Butler 23.6%, Udonis Haslem 16.3% and Aleksander Barkov 7.5%). For our full recent column including my Top 20 list, please visit The Face Of Miami Sports in 2020: Our Top 20 And Who's No.1.

Other most recent columns: Time to Abort Season Restarts and Call Off Sports For Rest Of 2020 / Uh-oh. Cam Newton means Belichick and Patriots Are Back / Saving the National Anthem From Sporting-Event Extinction / Baseball Joins In With Restart Plan. But Is Sports Walking Into a Giant Mess? / Noose Left For NASCAR's Bubba Wallace's Only Grows Resolve to End Racial Hatred / Team That Signs Kaepernick Will Be Champions Of the Street