He had a rough week, but Miami knows who Dwyane Wade is -- and knows it by heart. New column; plus Marlins' Miguel Rojas on pandemic (and playoffs!?) as MLB returns; also, Rest in pieces Redskins, Greg Cote Show podcast Episode 20 & more

GREG COTE SHOW PODCAST: NEW EPISODE 20 OUT NOW!: Our Miami Herald podcast, "The Greg Cote Show With Greg Cote," debuted in March and Episode 20 is out now! A new episode is out every Monday morning on Apple, Spotify, Google, Stitcher, Megaphone, iHeart or wherever you do your podding, and of course at MiamiHerald.com. Find all 20 we've done so far RIGHT HERE. Free! No paywall! Please listen, subscribe, rate and review. In new Episode 20 we chat ESPN's IT wizard Tim Cronin, who shares behind the scenes stories about working with the network's on-air stars, and about his recently being diagnosed with COVID-19. We also throw a pod-y party for our 20th podiversary, including a montage of Greg's greatest throat-clears, and bring you the controversial Mount Gregore Name Game (the C's). Oh, and we bury the Redskins name. Hear it all now!

MIAMI HEAT ICON DWYANE WADE HAS DONE WAY TOO MUCH GOOD TO HAVE ONE MISTAKE DERAIL HIM. NEW COLUMN: Dwyane Wade made a mistake. He knew it and tried to fix it very quickly, but it’s never quickly enough in the age of social media and instant everything. When you tweet something you should not have to 9 million Twitter followers around the 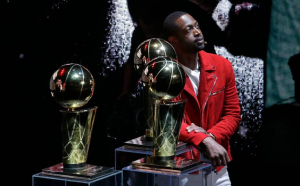 world, it’s out there, an echo reverberating. You can delete what you wrote, and he did, but you cannot make it disappear. D-Wade, retired Miami Heat legend and beloved icon, was defended by some but buried by consensus. The mea culpa came fast, the explanation, the carefully worded oops. It helped. But it’s never enough. In the offending tweet, Wade supported Nick Cannon after the TV host was fired by ViacomCBS for making anti-Semitic comments on his podcast. Wade tweeted at Cannon, "We are with you" and "Keep leading!" along with a black fist emoji. The national context made it worse, as both Cannon’s comments and Wade’s initial reaction come at a time of great tension in America over prejudice and divide. It is more than the ongoing protests for racial justice in the wake of the George Floyd killing. It is anti-Asian incidents ignorantly related to the coronavirus/COVID-19 pandemic originating in China. And it is a rise in hate crimes of anti-Semitism targeting those of the Jewish faith. Wade quickly wrote, "I want to clarify my now deleted tweet. I was not supporting or condoning what Nick Cannon specifically said, but I had expressed my support of him owning the content and brand he helped create." The emoji this time was prayer hands. Less than an hour later Wade said in another tweet: "I was too quick to respond without being fully informed about his hurtful anti-Semitic remarks. As you all know I have ZERO tolerance for any hate speech!" The first response was an explanation that fell short of contrition. The second was better, because it acknowledged that Cannon’s words were anti-Semitic, offensive and hurtful to many in the Jewish community — and because it rightly reminded the world what Miami knows very well about Dwyane Wade’s heart. Who he is as a man. For my full latest column -- free; no paywall! -- please visit, He Made a Mistake, But Miami Knows Who Dwyane Wade Is -- And Knows It By Heart.

MARLINS CAPTAIN MIGUEL ROJAS ON PANDEMIC, PLAYOFFS AND MONKEY MASKS AS MLB RETURNS: Miguel Rojas has earned "face of the Marlins" status as far as players go. He is the starting shortstop, team captain, clubhouse leader, fan favorite and player rep to the MLBPA. He’s been in Miami the longest, since 2015, surviving the roster teardown to be a part of 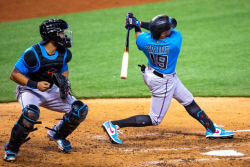 the work-in-progress rebuild as a veteran at age 31. Now Rojas helps a young team navigate the great unknown, the return of baseball amid a coronavirus/COVID-19 threat that finds his team, his team, at the epicenter of one of the pandemic’s worst hot spots. So, naturally, when speaking with Rojas, you must get to the obvious serious question first: Will the postgame monkey be back? We’re looking for signs of normalcy here, ports in a storm, and for the Marlins one of them the past few years has been Rojas, in a rubber monkey mask, sneaking up with a whipped-cream pie to the face of the game’s hero after a win as the teammate is being interviewed on TV. That was before wearing a mask took on a whole new meaning in 2020. Alas, everything has changed. Players aren’t even supposed to shake hands or fist-bump now. Or spit. So pies to the face are on indefinite hold. "I think it’s gonna have to be on a Zoom call now," Rojas joked this week — on a Zoom call with us, as a matter of fact. "Maybe I’ll create a YouTube channel or something like that? This is the new normal. We have to be responsible. It was fun, the monkey thing, but we have to move forward from that. Our conversation with Rojas comes as the Marlins and MLB prepare for Opening Week in a pandemic next week. For that full recent column, please visit Marlins Captain Miguel Rojas On Pandemic And Playoffs As Baseball Returns.

REST IN PIECES, REDSKINS. NOW HERE ARE SPORTS' OTHER SUSPECT (OR JUST WEIRD OR DUMB) NICKNAMES: They are out there. Fans of the Washington football club formerly known as "Redskins" who are genuinely upset that their team is burying some of its tradition and heritage with the nickname change that the franchise

officially announced Monday was coming. Which invites the question: Can you be indignant and angry while simultaneously wearing a rubber hog’s nose strapped on your face? Oft times elements of tradition and heritage are lousy things to celebrate. Slavery, for example. Fans angry at the disappearance of Redskins is the same misplaced outrage you see from folks attaching great significance to the Confederate flag and outraged to see it ceremonially lowered without salute. Racist symbols gotta go. The belated national consensus on that is some of the good to come from the hurt. From the George Floyd killing that forced an opening of eyes to social injustice and racial inequality. Sports is playing its part, that’s all, so NASCAR bans Confederate flags at its racetracks and now Washington is retiring Redskins and its Indian head logo, the new nickname yet to be revealed. Are the Nickname Police looking elsewhere now? Are other teams nervous about a forced rebranding? Nothing is as bad as Redskins — a dictionary-defined slur that some Native Americans saw as their N-word. Redskins was never really defensible, and team owner Dan Snyder needs to acknowledge that at some point. As for the other teams under related scrutiny? And what about teams whose nicknames are not so much controversial as just weird or dumb? We name 'em. For lour full recent column, please visit Rest In Pieces, Redskins. Now Here Are Sports' Other Suspect Nicknames.

Other columns from the past week: 'Redskins Is Racist Nickname Based On a Lie. Time For It to Disappear  /  Money Or Health? NFL and Major College Football Face A Decision  /  Tough Times All Around, But Rise Of Miami Sports Offers Hope  /  and The Face Of Miami Sports in 2020: Our Top 20 And Who's No.1.

Other recent columns: Time to Abort Season Restarts and Call Off Sports For Rest Of 2020 / Uh-oh. Cam Newton means Belichick and Patriots Are Back / Saving the National Anthem From Sporting-Event Extinction / Baseball Joins In With Restart Plan. But Is Sports Walking Into a Giant Mess? / Noose Left For NASCAR's Bubba Wallace's Only Grows Resolve to End Racial Hatred / Team That Signs Kaepernick Will Be Champions Of the Street