GREG COTE SHOW PODCAST: NEW EPISODE 14 OUT NOW!: Our new(ish) Miami Herald podcast, "The Greg Cote Show With Greg Cote," debuted in early March and Episode 14 is out now! Find a new episode out every Monday morning on Apple and Google Podcasts as well as on Spotify, iHeart, iTunes, Megaphone, Stitcher or wherever you do your podding, and of course at MiamiHerald.com. Find all 14 episodes we've done so far right here. Please listen, subscribe, rate and review! In new Episode 14 we welcome in as guests a pair of Miami legends -- O.G. rapper Luther (Uncle Luke) Campbell and Zoo Miami's Ron Magill. Hear Luke discuss the killing of George Floyd and Canes football, and hear Magill and I escalate our Duck War. That and a lot more in the new Ep14! Find every podcast we've done so far HERE.

SPORTS' GRADUAL RETURN OFFERS AMERICA RELIEF, A SMALL RESPITE. AND WE'VE NEVER NEEDED IT MORE: Man, do we need our games back! Sports, please. Please. A diversion. A respite. A little minute to feel good. Sports does not have the power to heal us as a nation, or to magically return us to normalcy. But they can help. Even as a symbol, they can play their part. I have had internal conversations with myself the past three months over the place of sports in society. Existential debates, almost. The frivolity of watching basketball games (as if they were actually important) when the growing coronavirus/COVID-19 U.S. death toll sits at around 110,000. The odd notion that having live sports on TV again might mitigate the desperation of those among a record American unemployment rate in an economy just now beginning to inch out of its shutdown. The idea of cheering for our teams again when so many thousands are in the streets, chanting for justice for George Floyd. For me there is something close to guilt attached to diving back into sports fan mode or writing about games as if they were important, right now, amid all of the grave challenges weighing on our country. Except they are important, right now. That realization comes to me not from rational thought but from the heart, where emotion lives. For us, right now, sports can be the hand of consolation on your shoulder after the tears. The gesture that seems to say, "It’s going to be alright." It’s OK to cheer, right now. Because we need to. To read our full latest column, please visit Sports' Gradual Return Offers America Relief, a Respite We Desperately Need.

IT TOOK THE SHARED OUTRAGE OVER GEORGE FLOYD'S DEATH TO FINALLY WAKE UP WHITE AMERICA: The killing of unarmed George Floyd while on the ground and handcuffed has seen sports stars out front and outspoken against police brutality and in support of protesters because black athletes are aware even fame and money do not insulate them from racism or 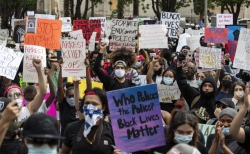 prejudice. They have lived it. "Am I next?" said young, black tennis star Coco Gauff after the Floyd killing. Dwyane Wade said something about the murder of Floyd that hit me. It was simple, what he said, but I felt it. I heard it. "Justice will not be served," the Miami icon and former Heat star wrote on Instagram, "until the unaffected are as outraged as those who are." He wrote it in all capital letters. Followed by 10 exclamation points. The unaffected. That’s me. That might be you. That is most anybody in this country who gets to sail through life with the wholly unearned luxury of not feeling racism or prejudice or a policeman’s knee on our neck solely because we happened to be born white. It is an embarrassment of privilege. Not that white folks get to enjoy it — but that everybody doesn’t. It is the shame of our country — its very name, the United States of America, sounding like a lie in a time of staggering divisiveness — that young African American parents still have to figure out the right time and the right words to tell their children what being black in America requires of them. A talk white parents needn’t broach. It is past time for the unaffected to stand up, and join a national chorus for change. For an end to police brutality, unequal rights and the toxicity of white supremacy. If in the killing of George Floyd we are seeing some sort of tipping point, an impetus for actual change, his legacy will be enduring. To read my full latest column, please visit It Took George Floyd To Finally Wake Up White America. As an addendum: Former President Barack Obama observed yesterday that he has never seen in his lifetime demonstrations of protest as racially diverse as those on behalf of George Floyd and against police brutality.

WHY ROGER GOODELL's NFL RESPONSE TO GEORGE FLOYD KILLING IS HYPOCRISY AT ITS MOST IRONIC: From his mountaintop, NFL commission Roger Goodell offered his execuspeak on the police killing of George Floyd and the protests that grew nationwide and continue. "The NFL family is greatly saddened by the tragic events across our country," he said in a statement. "The 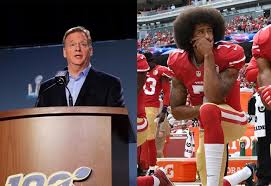 protesters’ reactions to these incidents reflect the pain, anger and frustration that so many of us feel." The irony and hypocrisy made me wince. The sentiment is years late. He could have made it in 2016 in standing behind the cry for social justice began by Colin Kaepernick, but he did not. His league wanted nothing to do with the kneeling during the national anthem to protest the very situation we have seen recur. Kaepernick, a quarterback then 28, in his prime and coming off a great season, approaches his fourth season of being blackballed by the NFL. His punishment for a cause so needed, now more than ever as we see again, is one of the great injustices in sports history. The where-were-you-when-we-needed-you reaction to Goodell was swift. "Shame on you. This is beyond hollow and disingenuous," said outspoken American filmmaker Ana DuVernay. "Your actions show who you are. You’ve done nothing but the exact opposite of what you describe here." Houston Texans receiver Kenny Stills, the former Dolphin, was rather more direct: "Save the bulls---," he advised Goodell. A former NFL executive, Joe Lockhart, said "now is the moment" for an NFL team to sign Kaepernick and suggested the Minnesota Vikings because the Floyd killing took place in Minneapolis. The thing is, Kaepernick should have a job on merit, not as a token symbolic gesture to, quite literally, put out fires. For our full recent column, please visit Goodell's NFL Response to George Floyd Killing Is Hypocrisy At Its Most Ironic.

Featured most recent other columns: George Floyd Is Why Kaepernick & Sports Must Continue Fight For Social Justice / MLB Players Demanding More Millions, Right Now, Is A Bad Look / and Amid a Pandemic, An Outrage in Alamance County.