« Dan Le Batard and Papi in Greg Cote Cote podcast's Father's Day special. It's new Episode 17, out now!; plus latest Hot Button Top 10 (updated), links to recent columns & more | Main | As sports lurches toward the (re)starting line -- or is that edge of a cliff? ... the latest (updated) Hot Button Top 10! See who's No. 1 and what else falls where this week; plus new Greg Cote Show podcast Episode 18 is out now & more »

GREG COTE SHOW PODCAST: DAN LE BATARD, PAPI STAR IN NEW NEW EPISODE 17 OUT NOW!: Our Miami Herald podcast, "The Greg Cote Show With Greg Cote," debuted in March and Episode 17 is out now! A new episode drops every Monday morning on Apple, Spotify, Google, Stitcher, Megaphone or wherever you do your podding, and of course at MiamiHerald.com. Find all 17 we've done so far right here. Free! No paywall! Please listen, subscribe, rate and review. Episode 17 is a Father's Day special with ESPN's Dan Le Batard and his dad Papi -- in Papi's first interview since he walked away from his fulltime role on Dan's Highly Questionable show. Why did he leave? Might he return? Join the conversation. That and more in new Ep17! Find every podcast we've done so far HERE.

Our George Floyd-related columns: Sports' Gradual Return Offers America Relief, a Respite We Desperately Need  /  It Took George Floyd To Finally Wake Up White America  /  Goodell's NFL Response to George Floyd Killing Is Hypocrisy At Its Most Ironic  /  and George Floyd Is Why Kaepernick & Sports Must Continue Fight For Social Justice

HERE'S WHY EMBATTLED STAR-SPANGLED BANNER SHOULD REMAIN A PART OF AMERICAN SPORTS: You thought kneeling during the national anthem was controversial? How about eliminating the national anthem? Erasing its place at sporting events altogether? It is a conversation we will be having. The signs already are here. A debate will arise from the ongoing nationwide

movement for social justice and against police brutality and racial inequality in the wake of the killing of George Floyd and others. Symbolism matters in all of this. It is why Confederate statues are toppled and why Aunt Jemima got retired. It’s why we leaped to a false conclusion over the noose in Bubba Wallace’s garage. Sometimes, overreaction is better than no action at all. Now, the maelstrom of conscience the nation is in will lead some to wonder what the "Star-Spangled Banner" has to do with games, anyway? It already has. And if you ever doubted that we are polarized, far more divided than united, all the evidence required is that even the national anthem might be seen as a lightning rod of controversy. Former U.S. men’s national soccer team coach Bruce Arena, to ESPN’s Taylor Twellman: "I think it puts people in awkward positions. We don’t use the national anthem at movie theaters and on Broadway, other events in the United States, and I don’t think it’s appropriate to have a national anthem before a baseball game, an MLS game." This week we saw the first team to take Arena up on his suggestion. The Tulsa Athletic of the lower-tier National Premier Soccer League announced it no longer would play the national anthem before matches, and would replace the "Star-Spangled Banner" with another patriotic song, Woody Guthrie’s "This Land Is Your Land." What sports will be this summer in its restart from the coronavirus/COVID-19 delay could be the excuse sports needs to move from the national anthem as an every-game routine. No fans in the stands would be that excuse. MLS already has said it would not play the anthem before games in empty stadiums. Whether this becomes any sort of trend, we shall see. I hope it does not. Unlike many of my media brethren, I support continuing to play our national anthem before sporting events. To read our full most recent column, please visit Saving the National Anthem From Sporting-Event Extinction.

NOOSE LEFT IN BUBBA WALLACE'S NASCAR GARAGE TAKES UNEXPECTED TURN: [Update: FBI found that the noose in Wallace's garage was being used to hold a door open and had been there since October -- not placed with Wallace in mind. "It was still a noose," said Wallace] Original post: It took a single coward in the cover of darkness, or was it a few? It took this one act to remind us how far we have not come, how far we have yet to go. It took this one gut-churning symbol of hatred and inequality to verify to all why America is in the streets right now — exactly 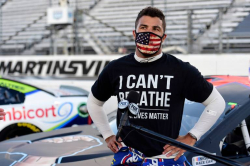 why a national movement is marching for change. A noose, placed in Bubba Wallace’s garage. A noose, at Talladega Superspeedway in Lincoln, Alabama, placed in the workspace of the NASCAR Cup Series’ lone Black driver. A noose, someone’s answer to the man who led and won the fight to see NASCAR recently step forward and ban Confederate flags at all of its tracks. A noose, in 2020 America, and suddenly we are in the 19th century again, where men in pointy white hoods carried torches, where 41 persons of color were found hanged in Gainesville, Texas, in 1862, where 30 years after that the governor of South Carolina, Benjamin Tillman, said, "We of the South have never recognized the right of the negro to govern white men, and we never will." Wallace never saw the noose, only the unimaginable prejudice and gall that put it there. A member of his team found it late Saturday night and immediately informed NASCAR. "Today’s despicable act of racism and hatred leaves me incredibly saddened and serves as a painful reminder of how much further we have to go as a society and how persistent we must be in the fight against racism," Wallace wrote on Twitter. "We will not be deterred by the reprehensible actions of those who seek to spread hate." This is why Colin Kaepernick knelt during the national anthem. This is why thousands nationwide — Black and white — march for George Floyd and for Breonna Taylor and for all of the other victims of the systemic racism that can foment deadly police brutality. To read our full recent column, please visit Noose Left For NASCAR's Bubba Wallace's Only Grows Resolve to End Racial Hatred.

My previous most recent columns: Team That Signs Kaepernick Will Be Champions Of the Street  /  Should Sports Take the Rest Of 2020 Off? There's An Argument  /  and Amid Pandemic And Protests, 'America's Pastime' Is Letting American Down