1) It's SATURDAY, MAY 30. I was pleased to be host last night's Miami Herald All-County Athletic Awards, an annual tradition since 1957 -- but virtual this time because of the pandemic. We honored Miami-Dade & Broward's best in prep sports on the Herald's Facebook & YouTube pages. 2) Our Greg Cote Show podcast is now separately on Twitter and Instagram. Follow us on both! 3) In The Previous Blogpost (ITPB): Hot Button Top 10, Greg Cote Show podcast Episode 13, Memorial Day tribute video, our Shula tribute columns & more. 4) Join us on Twitter.com/gregcote and Instagram.

GREG COTE SHOW PODCAST: NEW EPISODE 13 OUT NOW!: Our new(ish) Miami Herald podcast, "The Greg Cote Show With Greg Cote," debuted in early March and the new Episode 13 is out now! Find a new episode out every Monday morning on Apple and Google Podcasts as well as on Spotify, iHeart, iTunes, Megaphone, Stitcher or wherever you do your podding, and of course at MiamiHerald.com. Find all 13 episodes we've done so far right here. Please listen, subscribe, rate and review! In new Episode 13, we rock with Brendan Benson, co-founder of The Raconteurs along with Jack White -- a group that had the No. 1 album on the Billboard charts last summer. Brendan visits to talk about his new solo album (which we sample), the night Mick Jagger and and Ronnie Wood of the Rolling Stones visited backstage and more. Packed menu, including a celebration of Ryan Fitzpattrick's glorious pandemic beard. Don't miss it! Find every podcast we've done so far HERE. 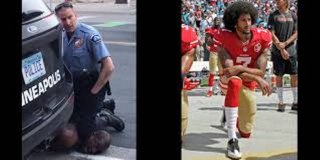 GEORGE FLOYD IS WHY KAEPERNICK & SPORTS MUST CONTINUE TO LEAD FIGHT FOR SOCIAL JUSTICE: The images are appalling. They evoke disgust, and sorrow, and anger. The cellphone video depicting the violent death of a man is right there for everyone to see. It is in living color — but all black and white. Here was a white officer killing an unarmed black man. Again. Again. George Floyd died with his hands in cuffs behind his back and gasping for air, as Minneapolis policeman Derek Chauvin pressed a knee on his neck for almost eight minutes, until the defenseless man stopped breathing. Floyd had been arrested on suspicion of trying to pass a counterfeit bill. Surveillance video refutes the officers’ claim that Floyd had resisted arrest. Chauvin and three other involved officers were fired. It isn’t enough. Not nearly. Firing isn’t the justice demanded here. A small-town Mississippi mayor had the gall to say he saw no wrongdoing by the officers in that video. In the video you hear Floyd moaning in pain and saying “I can’t breathe.” Those were the same words said by another black man, Eric Garner, before he died in 2014 in the choke hold of a white New York City officer. There have been far too many other such incidents in between. Garner’s death gave rise to the Black Lives Matter movement and inspired former NFL quarterback Colin Kaepernick to protest for social justice by kneeling during the national anthem before games. The irony in that is bitter. That Minneapolis officer used his knee to wrongfully kill a man. Kaepernick used his peacefully, in a cry for the end of deadly police force against unarmed black men. To read our full latest column, please visit George Floyd Is Why Kaepernick & Sports Must Continue Fight For Social Justice.

DEAR MLB PLAYERS: DEMANDING MORE MILLIONS, RIGHT NOW, IS NOT A GOOD LOOK, FELLAS: Everybody is wrong. Nothing is right about baseball’s money-centered negotiations to restart its season. The owners are wrong and the players are wrong. There are two sides to every argument, sure ... but with if both sides are lame? MLB commissioner Rob Manfred and the 30 clubs 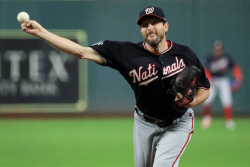 are wrong because the added pay cuts they want players to accept as outlined in this week’s proposal are way beyond the originally discussed prorated salaries based the number of games played in the eventual season. For example, in the shortened 82-game schedule baseball proposes, players would have made 50 percent (plus one game) of their contracts based on a 162-game schedule. That seemed reasonable. Mathematically logical. That’s why the MLB Players Association agreed to it. But management now wants pay cuts well beyond the prorated total, on a scale that hits big-money superstars hardest. As an example, over 82 games, Mike Trout’s prorated 2020 salary would have been just over $19 million. In the new proposal it would be just under $6 million — a pay cut of more than 80 percent. Seems excessive. Arbitrary more than logical. That’s why the MLBPA flatly objects and will counter-propose playing more games with no pay cuts beyond the full prorated sum. Now here is why the players are wrong, too: The optics. The timing. Even if players have a legit beef about the added cuts MLB wants (and they do), players will come off as greedy at the worst possible time and be the big losers in all of this. If perception is reality, the perception is ready to crush them. Consider: If Trout is forced to play for "only" $6 million this year, that still amounts to more than $70,000 per game — per game — over 82 games. And yet Washington Nationals ace Max Scherzer (pictured), a powerful leader of the MLBPA executive subcommittee who makes $36 million a year (non-prorated), insists players will not abide the additional pay cut. But, do players really want to be playing the more-money card right now? During a pandemic that will prevent fans from attending games? During a COVID-19 plague that has now killed more than 100,000 American? In an economy-crushing scourge that has seen more than 40 million Americans file for unemployment? Now is when you want to be the union seen complaining that $70,000 to play one baseball game is unfairly not enough? For our full recent column, please visit MLB Players Demanding More Millions, Right Now, Is A Bad Look, Fellas.

OUTRAGE IN ALAMANCE COUNTY: ONE SMALL REASON WHY SPORTS WON'T BE BACK TO NORMAL ANYTIME SOON: Engines were revving Saturday night as Ace Speedway in Alamance County, North Carolina, ran its first race of the season. The bleachers were filled with some 4,000 fans (pictured) sitting shoulder to shoulder, hardly any of them wearing protective face coverings. 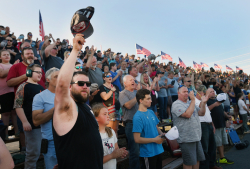 Memorial Day on Monday found huge crowds at Missouri’s Lake of the Ozarks, in Daytona Beach, in New York City and around the country, social distancing not a part of the partying and mandates against large gatherings be damned. The United States death toll from the ongoing coronavirus/COVID-19 plague was on the verge of 100,000 on Tuesday and likely will have surpassed that grim milestone by the time you are reading this. Meantime MLB and the NBA, NHL and MLS all plan to resume their seasons with no spectators allowed, the games television-only for fans. Football, the NFL and the college game, still hope to proceed on time and as usual in the fall, with full stadiums, although that prospect seems more and more in doubt. Sports fans, you may not be seeing your favorite teams in person and being among a large, cheering crowd again for a long while, and the reason goes being the pandemic itself. Blame the idiots among us. Blame the morons who packed Ace Speedway. Blame the racetrack’s owners. And the local sheriff, Terry Johnson, who refused to enforce the state’s shutdown order, refused to do his job, because he found the order "unconstitutional." Blame the countless thousands who gathered on Memorial Day in defiance of local edicts — laws designed to save us from ourselves. Blame the reckless, dangerously selfish among us who simply lack the resolve to be patient, to not socialize. Blame the science deniers, the conspiracy theorists who thought this coronavirus thing was all a hoax. Blame anybody who thought it was fake news when they heard about those two Missouri hairdressers who worked while positive with the virus and quickly infected an estimated 140 customers, who in turn then immediately put everyone around them at risk. The spread of the pandemic and the death toll will never be adequately contained, it will only linger malignantly and metastasize, if enough Americans adopt the mindset of those race fans in North Carolina and those holiday party people who gathered so obliviously in crowds on Monday, volunteering themselves as modern day lepers. Sports — its full stadiums and arenas the ultimate example of large social gatherings — will never get back to normal, to cheering crowds, until the virus is contained enough to do so safely, something delayed exponentially by examples such as the outrageous scene at North Carolina’s Ace Speedway. To read our full recent column, please visit Amid a Pandemic, An Outrage in Alamance County.

Our other most recent columns: How Can A Man 6-7 Seem So Small? That's Pierce On LeBron / No Controversy Here. Dolphins Have Ideal QB Situation / and Welcome to Sports Without Fans, the New Normal.