1) It's SATURDAY, MAY 23. I'm pleased to be hosting this year's Miami Herald All-County Athletic Awards, an annual tradition since 1957 -- but virtual this time because of the pandemic. Mark it: We'll honor Miami-Dade & Broward's best in prep sports on Wednesday May 27 at 6 p.m. on the Herald's Facebook & YouTube pages. 2) Our Greg Cote Show podcast is now separately on Twitter and Instagram. Follow us on both! 3) In The Previous Blogpost (ITPB): Hot Button Top 10, new Greg Cote Show podcast Episode 12 now out, our Don Shula tribute columns & more. 4) Join us on Twitter.com/gregcote and Instagram.

GREG COTE SHOW PODCAST: NEW EPISODE 12 OUT NOW!: Our new(ish) Miami Herald podcast, "The Greg Cote Show With Greg Cote," debuted in early March and the new Episode 12 is out now! Find a new episode out every Monday morning on Apple and Google Podcasts as well as on Spotify, iHeart, iTunes, Megaphone, Stitcher or wherever you do your podding, and of course at MiamiHerald.com. Find all 12 episodes we've done so far right here. Please listen, subscribe, rate and review! Episode 11 was a special hour-long, all-star tribute to Don Shula. Now in Episode 12 my wife in her first interview reveals embarrassing things about me and we make fun of Le Batard for a gross noise he made while talking about Shula. Also, ex-Marlins president David Samson drops by. Find every podcast we've done including the new one HERE. 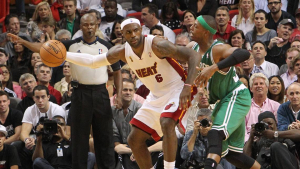 PAUL PIERCE TAKES LOW ROAD (AGAIN) IN ESCALATING BEEF WITH LEBRON. NEW COLUMN: Paul Pierce stands 6-7. By most any measure he is a big man. So why does he seem so small? He opens his mouth and shrinks to the size of an insect. A mere irritant. He has done it again. Even in retirement, the former Boston Celtics great leads the NBA in annoying. Miami Heat fans remember that during Dwyane Wade’s farewell season Pierce went on social media to note he had a better career. And there was no doubt ... that Pierce was delusional. That nobody outside of Bahston actually believed that, and that basketball history surely wouldn’t. (To underline that ESPN recently named the all-time greatest 74 players for the league’s 74 years, and Pierce was ranked 54th to Wade’s 26th. Not close). Pierce was at it again this week. This time the target of his pettiness was even bigger than Wade, as was how dumb he sounded. (That same ESPN ranking has LeBron No. 2 all time, behind only Michael Jordan). Pierce rationalized that LeBron never built a champion or sustained one in saying his top five consisted of Jordan, Kareem-Abdul Jabbar, Bill Russell, Magic Johnson and Kobe Bryant. He said it on a four-way Zoom video and as he spoke, fellow analyst Jay Williams had his head in his hands as Paul pierced the ear with indefensible nonsense. I remember that as a kid, my older brother and I would get in sports arguments all the time and I would drive him crazy by saying, "An opinion is never wrong." Except sometimes it is. It was Shaquille O’Neal who gave Pierce his nickname, The Truth. But there is no truth behind Pierce’s slight of James. It is calculated and comes from a bitter place. To read our full latest column, please visit How Can A Man 6-7 Seem So Small? That's Pierce On LeBron. 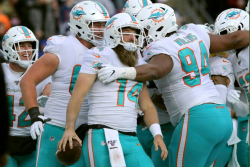 QB CONTROVERSY? HARDLY. WHY RYAN FITZPATRICK IS PERFECT FOR TUA TAGOVAILOA AND DOLPHINS: The Miami Dolphins do not have a quarterback controversy. They have the opposite. They have an ideal situation, with just the right veteran incumbent, just the right incoming rookie and the luxury to not hurry the latter onto the field before he is entirely ready. It is one of the best situations in the NFL, in fact, for reasons we will explain. Yet the specter of controversy arose this week when old vet Ryan Fitzpatrick, appearing on an ex-teammate’s podcast, said he still wants to start; it’s why he re-signed. Well, no duh, right! He is still playing at a high level. He was Miami’s team MVP last season. He competes; it’s what he does for a living. Fitzpatrick also said he will be an "open book" for first-round rookie Tua Tagovailoa — a willing mentor. And there is zero doubt about that. But all the football world heard is that Fitzpatrick won’t step aside. This is what happens in the void of sports, of actual games and results. Sports coverage is all peripheral now. It’s why the little back and forth on Instagram between Dolphins receiver DeVante Parker and Saints counterpart Michael Thomas became bigger news than was merited this week. It is something to chew on in the void. Heck, why do you think I’m writing about it? Rhetorical question. Answer: Because I can’t write about the Heat’s playoff run or Inter Miami’s inaugural season or how the Marlins are doing — all erased by the coronavirus/COVID-19shutdown. For our full recent column please visit No Controversy Here. Dolphins Have Ideal QB Situation.

CARDBOARD CUTOUTS, ROBOTS, FAKE NOISE? WELCOME TO SPORTS WITHOUT FANS, THE NEW NORMAL?: In hibernation going on 10 weeks now, the giant bear opens its eyes in the darkness, blinks, begins to stir. Slowly it unlimbers and lumbers toward the light. By degrees, sports is returning or planning to, but not sports as we know it. America gradually reopens from the full lockdown of the coronavirus/COVID-19 pandemic that began hitting us in March; all but two states have now eased restrictions. Sports follows the timeline, but it is a 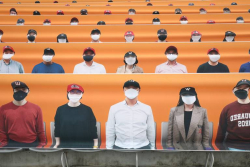 new normal that we enter, and it will be with us into the summer and perhaps into fall. Maybe longer? Sports will return without fans, a jarring, almost eerie sight. Is sports even sports at all without fans? As the new normal seeps in, we understand the resumption of sports, even sans fans, will lift the country’s spirits. Our teams if only symbolically can play a role in the national healing. And so NASCAR has resumed with zero spectators. The PGA Tour is inching back. MLB, NBA, NHL and MLS all plan to resume at some point this summer but with no fans for the foreseeable future. The unknowable question is how the NFL and college football — King Sport — will be affected later this fall. We already are beginning to see what sports with no fans looks like — including the comical side of it. This is the verbatim first paragraph of a soccer story on ESPN.com: Leading South Korea club FC Seoul apologized to fans after inadvertently substituting supporters in the stands with sex dolls during their 1-0 win over Gwangju FC on Sunday. (The funniest part of hat sentence? Inadvertently). A 67-page document on MLB’s resumption, optimistically planned for the regular season to start in early July, includes music in stadiums. Fox Sports’ Joe Buck revealed his network’s broadcast of NFL games this fall, assuming no fans, would include piped-in noise of a cheering crowd along with fake images of fans in the stands. I’m just hoping somebody in the Fox control room presses the wrong button after the home team scores and instead of cheering we hear a boisterous laugh track from a 1960s sitcom. Anything goes in the temporary (we hope) age of no-fan sports. Well, except inflatable dolls, apparently. For this full recent column, please visit Welcome to Sports Without Fans, the New Normal.

As NBA, MLB Plot Return, We Miss Them -- Yet Sports Have Never Seemed More Trivial

Anticipation of Relevance, Excitement Is Tua's Gift to Miami

And: Ultimate All-Time South Florida Major Sports Trivia Challenge / Sports Should Stop Pretending It Will Resume Anytime Soon As Coronovirus Rages / How a Longtime Herald Sport Writer Came to Own a Top Contender in No-Fans Florida Derby / Time for NBA, NHL to Shut it Down, End Seasons / Le Batard Show Deals with Coronavirus-Related Upheaval / Brady Leaving Patriots for Tampa. Will Belichick Be Proved Right In Letting Him Go? / Desperate Fans Turn to NFL After Reality Of First Weekend With No Games / Miami Sports Now Utterly Engulfed By Coronavirus Threat -- But Precaution Is Justified / It's Dominate Or Bust For Dolphins GM Grier Over Next 6 Weeks.