Dolphins' Grier says he has 'idea' on No. 5 pick. He'd better be right. New column; plus coronavirus, Tua make this Fins' weirdest, biggest, most interesting NFL Draft ever; also, Greg Cote Show podcast Episode 7 now out!, latest Back In My Day & more

1) It's SATURDAY, APRIL 18. Hang in, stay apart and eventually we rise together! 2) Our Greg Cote Show podcast is now separately on Twitter and Instagram! Follow the show on both platforms at TheGregCoteShow. 3) Find our latest Back In My Day from the Le Batard Show on ESPN Radio HERE at about the 21-minute mark. 4) In The Previous Blogpost (ITPB): Hot Button Top 10, Greg Cote Show podcast, links to recent columns & more. 5) Join us on Twitter.com/gregcote and Instagram.

Latest 'Back In My Day': Simpler Times!: From the Zoom Room, this latest BIMD premiered on Tuesday's Dan Le Batard Show With Stugotz on ESPN Radio. Listen and watch HERE.

GREG COTE SHOW PODCAST: NEW EPISODE 7 OUT NOW!: Our new(ish) Miami Herald podcast, "The Greg Cote Show With Greg Cote," debuted in early March and Episode 7 is out now! You can find a new Greg Cote Show out every Monday on Apple, Spotify or wherever you do your podding, and of course at MiamiHerald.com. Find all seven episodes we've done so far right here. Please listen, subscribe, rate and review! Our podcast is a variety show, sports and non-sports, 3-0-5 and national, fun and (when necessary) serious. In Episode 7 we welcome special guests Stugotz from the Le Batard Show for a ton o' fun. We also talk coronavirus financial impact with the god of sports business, Rick Horrow. Check it out now HERE! Le Batard Show fans will especially want to hear it.

DOLPHINS GM GRIER SAYS TEAM 'HAS AN IDEA' ON NO. 5 PICK IN NFL DRAFT. HE BETTER BE RIGHT: Chris Grier is just about a Miami Dolphins lifer as he begins his 20th season with the club and fourth as roster-shaping general manager. Now, with the team owning three first-round picks in next week’s NFL Draft for the first time, and a league-leading 14 picks overall, Grier has 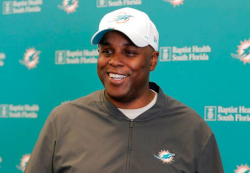 never had a bigger spotlight on him. Or a hotter one. The opportunity and results will illuminate Grier as a bright, rising young GM if he nails it, or burn him and leave permanent professional scars if he doesn’t. The coronavirus has limited ability to directly meet with prospects, but that’s true of all teams. There will be no excuse for bad choices. Draft night will be a very different, technological challenge, but, again, no excuses. “We really don’t have any apprehension about this process,” he said. Way back when, Grier happened to have majored in journalism at the University of Massachusetts-Amherst. So when he hopped on a coronavirus-age predraft video conference call with media on Thursday, he knew precisely what to do: Say as little meaningful as possible. In a 20-minute remote chat with 53 invited journalists, Grier steadfastly offered no real hint, to reporters or to rival teams, as to the Dolphins’ thinking or intentions entering the April 23-25 draft, which also will be done remotely amid the stay-home orders caused by the COVID-19 threat. Grier wasn’t the general manager Thursday. He was closer to the Minister of No Information. He did admit, “We have an idea of who we like” for the top pick, but would not acknowledge what most everyone would bet their life savings on — that Miami almost surely will target a quarterback with the No. 5 overall pick, and that Alabama’s Tua Tagovailoa and Oregon’s Justin Herbert (or vice versa) are the primary, likeliest possibilities. He admitted the onus is on him — and on owner Stephen Ross, coach Brian Flores, new offensive coordinator Chan Gailey and the rest of the Fins decision makers, to get this right. Very right. For our full latest column, please visit Dolphins' Grier Says He Has An Idea On Top Pick. He'd Better Be Right.

CORONAVIRUS, TUA MAKE THIS DOLPHINS' WEIRDEST, BIGGEST, MOST INTERESTING DRAFT EVER: The bell has rung. It’s the 10-day countdown (now nine) to the NFL Draft and, astonishingly, all of the following statements are true to various degrees of arguably-so to absolutely-certain: This 85th NFL Draft will be the weirdest of them all. This 55th Miami Dolphins 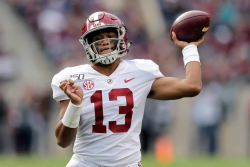 draft will be the most interesting in franchise history. The most important, too. And the most pressure filled. Oh, and Tua Tagovailoa (pictured) — whom the Dolphins should either be wisely targeting or should avoid like somebody standing too close and coughing, depending on one’s point view — is a figure of controversy and wildly differing opinions such as few drafts have ever seen. Not counting Bullygate or other intermittent pratfalls like an offensive line coach snorting cocaine from his office desk, the Dolphins have not been the center of NFL attention probably since Dan Marino led them into their most recent Super Bowl appearance to end the 1984 season. But all eyes will be back on this usually off-radar team the night of April 23 as Miami sits at the poker table with the tallest stack of chips — three first-round picks, the fifth, 18th and 26th overall, and a league-leading 14 picks overall — in club history. And as Miami covets, most believe, the all-or-nothing risk named Tua. That means all eyes will be on the front-office team of owner Stephen Ross, general manager Chris Grier and coach Brian Flores, the triumvirate with much to prove and now tasked with making the once-proud Dolphins matter again, and reanimating a large but worn down fandom. To read our full recent column, please visit Coronavirus, Tua Make This Dolphins' Weirdest, Most Interesting Draft Ever.

Amid a Pandemic, to Florida, Pro Wrestling is 'Essential' -- This is one of those only-in-Florida stories, like hanging chads. And here is why, in the age of a global pandemic, the precedent it sets looks very unhealthy and potentially dangerous.

A Pie Chart of QB Possibilities For Dolphins -- Tua Tagovailoa or Justin Herbert with Miami's first pick (fifth overall) on April 23? A trade-up for Joe Burrow? Something else entirely? We have the percentage likelihood for every option.

Baseball's Bizarre Restart Plan Would Be Unfair to Players -- One option MLB is considering -- starting the season as soon as next month with every team playing in Phoenix, and no fans -- would separate players from their families for 4 1/2 months.

NFL Draft Will Offer Blunt Verdict on Canes' Talent -- The once-gushing pipeline to the pros out of Coral Gables has dried up. We quantify the change, and bring you the (meager) outlook for UM players in this month's draft.

Le Batard Show Deals with Coronavirus-Related Upheaval / Dolphins' Most Important Rebuilding Is Yet to Come / Brady Leaving Patriots for Tampa. Will Belichick Be Proved Right In Letting Him Go? / Desperate Fans Turn to NFL After Reality Of First Weekend With No Games / Miami Sports Now Utterly Engulfed By Coronavirus Threat -- But Precaution Is Justified / It's Dominate Or Bust For Dolphins GM Grier Over Next 6 Weeks

Select additional recent columns: Repentant Cheater A-Rod Slams Astros With Lesson On How to Handle Their Own Scandal / Inter Miami Is Market's Sleeping Giant As Home Opener Nears / As NFL Free Agency & Draft Near, All You Need To Know About Dolphins' QB Situation / Beckham, Inter Miami Survive To Finally Reach Opening Week / Jeter Arrives At Camp, Calls Marlins 'Layered With Talent' / Dwyane Wade, His Transgender Daughter And A Lesson In Love / Why Marlins Aren't Pursuing Puig All About Change In Ownership / and Pressure On Marlins for Big Improvement Now -- and It's About Time / It's Time For Anonymous Lone Voter Who Denied Jeter To Step Forward / Heat And Gloriously Impatient Riley Win In Trade For Iguodala / Return Of Ed Reed, Even If Mostly Symbolic, Leads Surge By Canes Football / Poor Dolphins Finally Getting Rid Of Brady Only to Have Mahomes Take His Place / Our two-part series: How One Man Long Forgotten Changed Everything For the Miami Dolphins and How Shula Made Dolphins Perfect and Made Miami Matter, And the Coach Today at 90 / Kobe's Death Sends Sports World Reeling, But Immortality Is His / Jimmy Johnson's Biggest Triumph? Knowing When To Quit -- And Why / and Announcing Miami Dolphins' 2010-19 All-Decade Team