PREMIERE WEEK FOR NEW GREG COTE PODCAST: Our new Miami Herald podcast, "The Greg Cote Show With Greg Cote," premiered Monday with Episode 1. Find it at MiamiHerald.com, on Apple Podcasts or wherever else you do your podding. Remember to listen and subscribe today. It's free, and worth every penny! 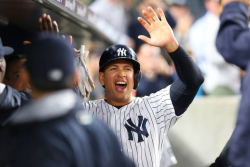 NEW COLUMN: REPENTANT CHEATER A-ROD SLAMS ASTROS' HANDLING OF THEIR OWN SCANDAL: The public rehabilitation of Alex Rodriguez is complete. A-Rod did the crime, did the time, and now he’s back in the game. In its embrace. He has an ESPN microphone in his hand as a baseball analyst. He put an engagement ring on J-Lo’s hand. Life is good. The rehab came full circle this week. It happened Tuesday, during a spring training broadcast of a Yankees-Red Sox game, with his most direct contrition to date on his own steroids scandal. That public remorse in turn emboldened him to blister the Houston Astros over their scandal. This was Alex Rodriguez, convicted cheater, sort of reclaiming the moral high ground. It was quite a thing to see. Surely there is an ulterior motive. A-Rod’s sudden outright contrition might be aimed at the 2022 Hall of Fame vote that will find his name on the ballot for the first time. He has seen how not coming clean on past sins has failed others such as Barry Bonds and Roger Clemens, so he has nothing to lose with the hands-up mea culpa. As a strategy, I-did-it-and-I’m-sorry as an ulterior motive here is not wrong. It’s smart, actually. Honesty is good, and better late than never. It was fascinating, and rather impressively seamless, the way A-Rod intertwined, compared and contrasted the sign-stealing scandal embroiling the Houston Astros organization with his own controversies. To read my full latest column, please visit Repentant Cheater A-Rod Slams Astros With Lesson On How to Handle Their Own Scandal.

HOW BECKHAM'S INTER MIAMI IS POISED TO QUAKE SOUTH FLORIDA SPORTS LANDSCAPE: Major League Soccer is thinking big and talking big as its 25th season unfurls. It should. And expansion team Inter Miami — Club Internacional de Futbol Miami on the birth certificate — is a big reason. So is the face of the team, club 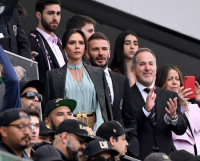 president David Beckham. One game into its history, there is little question Inter Miami is positioned to be a signature franchise in MLS, a cornerstone, with its location, ideal fan-base diversity and the charisma and international appeal of Beckham all essential selling points. (Beckham’s brand and starpower are such that London’s Daily Mail reports Becks and celebrity wife Victoria, the former Spice Girl, are planning a $125,000 birthday party next week for eldest son Brooklyn, who is turning 21. Guests will include Elton John. The children all call him Uncle Elton). This is something big that is starting with Inter Miami. It will be exciting to watch unfold. It has a chance to quake South Florida sports. In fact I would not be surprised if Inter Miami, starting from zero, was playing for an MLS championship sooner than the Dolphins, Heat, Marlins, Panthers or Canes football were playing for a championship in their sports. To read our full recent column, please visit Inter Miami Is Market's Sleeping Giant As Home Opener Nears.

Other most recent columns: As NFL Free Agency & Draft Near, All You Need To Know About Dolphins' QB Situation and Beckham, Inter Miami Survive To Finally Reach Opening Week. Also: Jeter Arrives At Camp, Calls Marlins 'Layered With Talent' / Dwyane Wade, His Transgender Daughter And A Lesson In Love / Why Marlins Aren't Pursuing Puig All About Change In Ownership and Pressure On Marlins for Big Improvement Now -- and It's About Time.