« We're back with new Hot Button 10 (updated). Marlins, NBA, Dwyane Wade and NASCAR jockey for the top. See who's No. 1 and what else falls where; plus what we did on vacation & more | Main | New podcast, The Greg Cote Show With Greg Cote, debuts today. Episode 1 out now!; plus latest Hot Button Top 10: See who's No. 1 and what else lands where; also, Dolphins' QB future, Beckham & Inter Miami & more »

Good things come in 3's: Jeter arrives, the 3rd of our Marlins spring columns; plus L3GACY Celebration: Dwayne Wade, His Transgender Daughter And A Lesson in Love; also, me planking on TV & more

1) It's TUESDAY, FEBRUARY 25. Hot Button Top 10 was off this past week. 2) In The Previous Blogpost (ITPB): Hot Button Top 10, my Disco Cruise vacation & more. 3) Join us on Twitter.com/gregcote. Also on Facebook and Instagram. 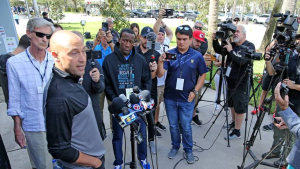 DEREK JETER AT CAMP: MARLINS 'LAYERED WITH TALENT,' READY TO  MAKE A MOVE: Derek Jeter is this kind of guy. On a casual walk Monday at the Miami Marlins’ spring training facility, he asks how I’m doing, and without giving it a thought I say, "Couldn’t be better." He smiles, clasps me on the shoulder and and says, "Oh, you can always be better." Think of athletes whose careers are synonymous with success, with winning, and you would be hard-pressed to nominate a better one than Jeter. His 20 New York Yankees seasons included 17 postseason appearances (13 in a row), seven World Series and five championships. His two seasons presiding over and part-owning the Marlins have produced records of 63-98 and 57-105 with two last-place finishes. His Yankees career could hardly have been better. His Marlins era might finally be heading in that direction. It is time to turn a corner. Nobody knows it better than Jeter as the franchise begins Year 3 of the regime of majority owner Bruce Sherman and Jeter. "I think we’re in a lot better shape as an organization now than when we took over," Jeter said Monday, in his first spring training appearance of the budding season. "We should be a lot better this year than last year. We have a lot more talent. We have an organization that’s layered with talent." To read our full latest column, please visit Jeter Arrives At Camp, Calls Marlins 'Layered With Talent.' 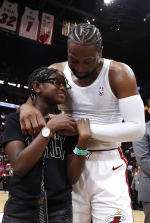 AS HEAT RETIRE JERSEY, WADE PROVES ALL-STAR PARENT WITH EMBRACE OF LGBTQ COMMUNITY: The Miami Heat’s "L3GACY Celebration," the three-day tribute to retired franchise icon Dwyane Wade, finds something different now about Wade. His legacy has changed. It has grown, and in a way even he could not have

imagined. Fate challenged Wade and his family to show who they are, and what they showed was love, unequivocal love. What they showed was the potential to influence thinking, soften prejudices and foment understanding — to remind us how much bigger than basketball the real world is. Wade had a baby boy he named Zion. Today that baby boy is a 12-year-old who identifies as she/her and is called Zaya. (Wade is pictrued with Zaya -- then still known as Zion -- on the court last April following his final Heat home game). No amount of fame or wealth — and Wade and actress wife Gabrielle Union have lots of both — guarantees how a couple will handle such a thing. But the Wades provide a masterclass in parenting here, not with mere "tolerance," a buzzword for the lowest form of begrudging acceptance, but with a warm and open embrace of their child’s journey, and, by extension, that of everyone in the LGBTQ community. It began when the child got home and told her folks, "Hey so I want to talk to you guys. I think going forward, I’m ready to live my truth." As the Heat retire Wade's No. 3 jersey Saturday night, this is the story of how a transgender daughter and her family's response brought out the best in everyone. To read our full recent column in full, kindly visit Dwyane Wade, His Transgender Daughter And A Lesson In Love.

WHY AREN'T MARLINS GOING AFTER YASIEL PUIG? HERE'S WHY: "Why aren’t the Marlins going after Yasiel Puig?" It is not unreasonable to wonder. In fact it might even be asked with a tone of incredulity. The question has probably been on the minds of Miami fans who care enough about baseball to know Puig (pictured) is the most prominent still-available free agent as spring training unfurls. Puig-to-Miami makes sense in a couple of undeniable ways. The Marlins have made an expressed effort to add offensive production to a 105-loss team that scored the second-fewest runs in all of MLB in 2019 and — in a season of record-setting longball — finished dead last in home runs. Puig, for all that is mercurial about him, is a career .277 hitter who has clubbed 28, 23 and 24 homers the past three years and who had a career-high 84 RBI last season. By any standards he is an above average hitter. By Marlins standards he’d a star — especially in this market, where the native of Cienfuegos, Cuba who defected in 2012 might be an especially popular signing. And, having just turned 29, Puig is in his prime, while his protracted availability suggests the price may be right. The Marlins’ roster would only be enhanced by adding Puig. But it won’t happen. And why it won’t happen underlines the fundamental difference between the regime of immensely unpopular former owner Jeffrey Loria and the Bruce Sherman/Derek Jeter hierarchy beginning its third season. To read my full recent column, please visit Why Marlins Aren't Pursuing Puig All About Change In Ownership.

MARLINS OWNER, MANAGER TURN UP PRESSURE ON TEAM TO MAKE BIG LEAP: The optimism surrounding the Miami Marlins’ start of spring training is quite sharply spoken. "A lot more talent [than last year] — upper level talent," as president of baseball operations Michael Hill put it Monday. But quantifying that optimism is a tougher ask. Trying to get a handle on Marlins expectations is where the expertly crafted vagueness comes in. "We’re not putting limitations on what we can do," said Hill, as if a jinx might be in play. Marlins CEO and part owner Derek Jeter famously says, "I don’t put a time frame on it," meaning any idea at all when the club’s ground-floor rebuild might bear tangible fruit. But majority owner Bruce Sherman (pictured) on Monday at least had the nerve to say, "The time now is to be much better this year." And manager Don Mattingly refreshingly placed some pressure on his team — and on himself. "I kept coming back to, ‘It’s time,’" said Mattingly. "Time to kind of get this thing up the hill. We’re going to be disappointed if we don’t make significant strides. We’ve got to raise or expectations." I was up in Jupiter for this week's opening of full spring training and launch of Year 3 of the Sherman/Jeter era. To read that column, please visit Pressure On Marlins for Big Improvement Now -- and It's About Time.

GREG COTE, PLANKING: This was o Tuesday's Le Batard Show on ESPN Radio and ESPNews. I planked for 2 minutes 30 seconds. I did at it again for even longer. Everybody seems impressed. I don't know why.

Our other most recent columns: It's Time For Anonymous Lone Voter Who Denied Jeter To Step Forward / Heat And Gloriously Impatient Riley Win In Trade For Iguodala / Return Of Ed Reed, Even If Mostly Symbolic, Leads Surge By Canes Football / Poor Dolphins Finally Getting Rid Of Brady Only to Have Mahomes Take His Place / And our two-part series: How One Man Long Forgotten Changed Everything For the Miami Dolphins and How Shula Made Dolphins Perfect and Made Miami Matter, And the Coach Today at 90.