« Chiefs reign in Miami! With my column from Miami Super Bowl game; plus Latest Hot Button Top 10, nailed our SB pick, how Shula made the Dolphins perfect and the coach today at 90, the NFL's big bounce-back & more | Main | The Hot Button Top 10: See who's No. 1 and what else lands where this week; plus Heat/Marlins/Canes/Fins among our boatload of recent columns & more »

TO 'THE LONE VOTER' WHO DENIED JETER: STEP FORWARD OR  BE OUTED!: A brief chronology of the world’s 10 greatest mysteries: Is there intelligent alien life? (Infinity). What happened to the Ark of the Covenant? (587 B.C.). Where is Cleopatra’s tomb? (30 B.C.). Who was Jack the Ripper? (1888). Why is "abbreviation" such a long word? (Unknown). Did Lee Harvey Oswald act alone? (1963). Whatever happened to D.B. Cooper? (1971). Where is Jimmy Hoffa? (1975). Why ‘New Coke’? WHY?!?! (1985). And who didn’t vote for Derek Jeter? (2020). There you have it. Nine eternal mysteries that may never be fully solved — and one that still might be. "The Lone Voter" is still out there. But where? Someone knows who he (or she?) is. The unnamed anarchist is someone’s neighbor or friend, hiding in plain sight, ripe for outing. To read our full latest column, please visit It's Time For Anonymous Lone Voter  Who Denied Jeter To Step Forward.

IGUODALA TRADE A WIN FOR HEAT AND SIGN OF PAT RILEY"S GLORIOUS IMPATIENCE: When they called Patriots coach Bill Belichick’s name in honoring the NFL‘s all-time greatest 100 players and coaches before the Super Bowl at Hard Rock Stadium on Sunday, he held up two hands full of championship rings in a brazen showiness utterly earned. Miami Heat president Pat Riley has

done the equivalent this week, though somewhat more subtly, with his maestro’s work ahead of Thursday’s NBA trade deadline. The greats have a way of reminding us how they got that way, lest we forget. It can be the bling on the fingers. Or it can be a midseason trade you didn’t have to make — but one that looks like a master class in how to get more than you give. In a deal completed Thursday Miami got elite wing defender Andre Iguodala from Memphis along with starter-caliber small forward Jae Crowder and reserve Solomon Hill, with the Heat sending to the Grizzlies injury-prone Justise Winslow and two seldom-used spare parts in James Johnson and pouty, oft-suspended Dion Waiters. (Riley and Iguodala are pictured). Miami has a team option on the second year of Iguodala’s two-year, $30 million deal, meaning the Heat can part with him after this season and still have the salary-cap wherewithal to take aim at a major max-salary star in the bounteous free agency sweepstakes coming in the summer of 2021. That’s when the Greek Freak, Giannis Antetokonmpo, will grand-marshal the parade of available talent. Riley turns 75 next month. He ain’t playin’. He doesn’t have all day to whip Miami back into championship contention and add another NBA ring to the eight he has won as a player, head coach or executive, including the Heat’s crowns in 2006, 2012 and 2013. To read our full column, please visit Heat And Gloriously Impatient Riley Win In Trade For Iguodala.

WHY RETURN OF ED REED, EVEN IF MOSTLY SYMBOLIC, IS HUGE BOOST FOR CANES FOOTBALL: You see a little gray in Ed Reed’s full-but-neatly-trimmed beard now. His age has doubled since he was last an active part of Miami Hurricanes football as a player from 1998 to 2001. His new title now? "Chief of Staff"? It sounds grandly inflated, like he will be in a suit overseeing

board meetings. "I’m not hiring, I’m not firing. I’m coming here to help. I’m a piece of the puzzle," Reed, now 41, described his own role Wednesday in being officially introduced on campus. He will not be a coach on the field. He will not recruit except when prospects visit on campus. He will be more of an advisor/sounding board and right-hand man to coach Manny Diaz. "I’m [his] Doc Holliday," he said, of the Old West sidekick to Wyatt Earp. "I’ll be his huckleberry," Reed added, citing southern slang for "I’m your man." More than as a counsel to Diaz, though, Reed is on board to be this: An Example. Reed was hired to be a mentor to players, to show them the right way. "Stand up. Be accountable," he said. He was a consensus All-American safety at UM. He was a vital part of the school’s last of five national championships, in 2001. He is the imprimatur of all The U has developed in terms of family and culture. To read this full column, please visit Return Of Ed Reed, Even If Mostly Symbolic, Leads Surge By Canes Football.

BAD LUCK DOLPHINS: FINALLY GETTING RID OF NEMESIS BRADY, NOW MAHOMES TAKES HIS PLACE. NEW COLUMN: Miami hosts another Super Bowl, and Dolphins fans automatically tease themselves (or is it torture?) wondering when their team might be back in one. Dreaming is free, and folks keep insisting anything is possible, so have it. But understand this: the Dolphins seem 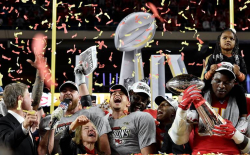 no closer today to their first Super Bowl appearance since the 1984 season and first victory since the 1972-73 quiniela. They seem further away, in fact. The Dolphins have simply swapped one gigantic AFC roadblock for another. Tom Brady and the Patriots dynasty fades. Patrick Mahomes and a Chiefs dynasty arises. The wattage of brightness for Kansas City’s long-term future under Mahomes, the generational quarterback, can hardly be overstated. Anything said about this young guy that seems like hyperbole probably isn’t. And this is who will now be blocking Miami’s path to playing in a Super Bowl for all of this decade and beyond. The pressure on the Dolphins regime to land a quarterback as good or to assemble a team to beat Mahomes has never been greater than it seems now as we witness the full coronation of Mahomes. This isn’t discounting the long, bright future of another Dolphins AFC roadblock, dual-threat Lamar Jackson in Baltimore. But Mahomes is the league’s new No. 1 QB and face of the NFL until somebody takes those things from him. To read our full column please visit Poor Dolphins Finally Getting Rid Of Brady Only to Have Mahomes Take His Place.

My column from the game: Chiefs, Mahomes And A Former Dolphin Win Super Bowl 54 -- And So Does Miami.

MY 2-PART SERIES ON HOW DOLPHINS CAME SO QUICKLY TO HAVE GREATEST TEAM OF ALL TIME: This was a Super Bowl Week thing but I'm proud of the series and it's timeless so I wanted to give you another chance to read it. The 1972 Perfect Season Dolphins were named the greatest team of all time as part of the NFL's 100th season celebration. How did it happen? In Part 1 told how a long-lost Dolphins executive pre-dating Don Shula, a man named Joe Thomas, was assembling a treasure trove of talent amid the wild dysfunction of the George Wilson-led expansion years. For that tale, visit How One Man Long Forgotten Changed Everything For the Miami Dolphins. Part 2 tells the story of how and why Shula's arrival changed everything, from the players themselves, and it takes a poignant look at Shula's life today at age 90. For that full column, visit How Shula Made Dolphins Perfect and Made Miami Matter, And the Coach Today at 90. This is a deep dive into how the Perfect Dolphins happened, with never-before-told stuff. I hope you enjoy.

THE NEW 'BACK IN MY DAY': READY, SET, HYPE!: We poke good-natured fun at the excess of sports in general, led by the Super Bowl. Debuted on yesterday's Le Batard Show on ESPN Radio and ESPNews:

Other select recent columns: Kobe's Death Sends Sports World Reeling, But Immortality Is His. Also: How The NFL, Even Amid Safety Concerns, Bounced Back And Is Healthier Than Ever / How Miami Went From Forgotten to Back On Top As 'Super Bowl City' / Jimmy Johnson's Biggest Triumph? Knowing When To Quit -- And Why / Announcing Miami Dolphins' 2010-19 All-Decade Team / On Miami's Home Field, Gators Remind Canes How to Win Major Bowl Game and We Are The Champions: How South Florida Came to Own the State in High School Football.

Visit Greg Cote Column Headquarters, and revisit this blog often because it is updated regularly. The Associated Press Sports Editors 2018 writing awards ranked the blog's author a Top 10 national sports columnist in the major-outlet category. Author of 'Fins At 50,' available on Amazon. Follow on Twitter @gregcote.