1) It's FRIDAY, JANUARY 24. Check out our Miami Dolphins book, 'Fins At 50,' on Amazon. It's the perfect anytime gift for all the Dolfans in your life. 2) In The Previous Blogpost (ITPB): Hot Button Top 10, nailed our AFC and NFC Championship Game picks, Hall of Famer Jimmy Johnson's biggest victory, new John Anderson video & more. 3) Join us on Twitter.com/gregcote. Also on Facebook and Instagram.

On Derek Jeter election: It wasn't me!: Miami Marlins president (and oh, yeah, former Yankee) Derek Jeter got into Cooperstown last night with 396 votes of 397 cast. A few weeks ago we'd been joking on the Le Batard Show on ESPN Radio that I (a BBWAA voter) should be the person to deny Jeter unanimous entry. They were goading me to do it. And so since last night fans of the show (even knowing better) have been suggesting I was the lone dissenting vote. Well, I was not that out-on-an-island person -- just to refute any dastardly rumors. In late November I even preemptively wrote this column: If Jeter Doesn't get In With Unanimous Vote -- Don't Blame Me. And pictured right is the official ballot I sent in. (Click to see enlarged version). 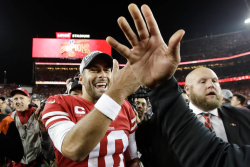 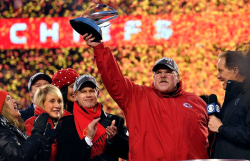 SUPER BOWL PRIMER: TOP 10 STORYLINES YOU'LL GROW SICK OF AS CHIEFS, 49ERS HEAD TO MIAMI: Parochially you know Miami wanted Ryan Tannehill for the Super Bowl it is hosting. The idea of the longtime Dolphins quarterback playing for an NFL championship in his former stadium, under the nose of the team that discarded him, would have been rather surreal and delicious. But get over it, already. Moving on. The matchup we got for Super Bowl 54, minted Sunday night, will have no problem filling two weeks of mountainous buildup. So: Ready, set ... hype! Here’s your primer. Our Top 10 storylines you’ll be sick of way before the Feb. 2 game at Hard Rock Stadium: The two teams' record title drought. Mahomes vs. Garoppolo. Reid vs. Shanahan. The Bosa Connection. Damien Williams and the Ex's. Finally Zach's time? Miami sets host record. Katie Sowers. The Special K's. And Canes are shut-out. Pictured left to right: Niners' Garoppolo and KC's Reid celebrating their Sunday wins. For our full latest column, please visit Super Bowl Primer: Chiefs, 49ers Storylines You'll Soon Be Sick Of.

Featured other most recent column: HOW MIAMI WENT FROM FORGOTTEN BY NFL TO BACK ON TOP AS 'SUPER BOWL CITY': We speak with Miami Super Bowl Host Committee head Rodney Barreto and Dolphins/stadium owner Stephen Ross.

Also: Jimmy Johnson's Biggest Triumph? Knowing When To Quit -- And Why / America and Super Bowl Host Miami Have a Rooting Interest Now. Tannehill, Please! / Here's Winner Of the Dan Enos Cup For Biggest Disappointment in Miami Sports / Dream Ticket: Brady, Tagovailoa Both Dolphins in 2020? / Announcing Miami Dolphins' 2010-19 All-Decade Team / On Miami's Home Field, Gators Remind Canes How to Win Major Bowl Game and We Are The Champions: How South Florida Came to Own the State in High School Football.

Visit Greg Cote Columns Headquarters. And revisit this blog often because it is updated regularly. The Associated Press Sports Editors 2018 writing awards ranked the blog's author as a Top 10 national sports columnist in the major-outlet category. Follow on Twitter @gregcote.