Lots of Miami-centric Super Bowl possibilities in NFL's final four. But only one gives America (and South Florida) a rooting interest. Our new column; plus Clemson anointed for 2020 despite loss, hear the new Ozzy/Elton song here & more

1) It's WEDNESDAY, JANUARY 15. Check out our Miami Dolphins book, 'Fins At 50,' on Amazon. It's the perfect anytime gift for all the Dolfans in your life. 2) In The Previous Blogpost (ITPB): Dan Enos Cup for  Miami's biggest disappointment, Dream Ticket Tua and Tom for Dolphins?, our Wild Card Weekend ignominy, new Back In My Day video & more. 3) Join us on Twitter.com/gregcote. Also on Facebook and Instagram.

NFL FINAL FOUR: LOTS OF MIAMI-CENTRIC SUPER OWL STORIES -- BUT ONLY ONE REALLY MATTERS: It’s nothing personal, Kansas City, so please don’t take it that way, Chiefs fans. But would you please lose? I know y’all haven’t been in a Super Bowl since the 1969 season, so being one win away is a little bit of a feel-good story and all that. No matter. K.C. winning the AFC championship would deny host city Miami the most intriguing Super Bowl possibility left in the NFL’s final four playoff teams. The Dolphins haven’t been in a Super Bowl since 1984, so Miami 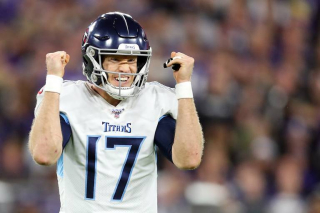 hosting the game without tasting it can be bittersweet, a cruel tease. So here we are, again, sifting through the Chiefs-Titans and 49ers-Packers semifinal matchups to find what is — or should be — of most interest in this final four to South Florida fans: No. 1--Ryan Tannhill, Ryan Tannehill, Ryan Tannehill: The story is so far-fetched you dare not make it up, but then it actually happens -- this is why we love sports in all its unscripted glory. And the fall and rise of Tannehill is the best thing going right now. Yes, I know. Tennessee rides on the back of running beast Derrick Henry and stout defense more than on Tannehill’s arm. Nevertheless, the Titans season pivoted sharply when Tannehill replaced Marcus Mariota as starting quarterback in Week 7. It is why the team is this far. Tannehill led the NFL in passer rating, and if he doesn’t get some MVP votes, call the cops. Now Tannehill is one win from playing in a Miami Super Bowl in the same stadium where for seven seasons he tried and failed to make the Dolphins winners. It was unfathomable as he began the season traded and demoted, sitting as Mariota’s backup. Tannehill of course didn’t fail here nearly as much as the Dolphins failed him by never doing what the Titans did in surrounding him with enough talent. Tannehill returning to Miami and maybe raising the Lombardi Trophy in the Dolphins’ backyard would simply be one of the great redemption tales in sports history — and one every Dolfan with a heart should be rooting for. So get out the way, Chiefs! No. 2--The Hall haul: The 2020 Pro Football Hall of Fame class to be revealed just before the Super Bowl on Feb. 2 has a distinct local flavor. Sunday night we saw the emotional reaction live on Fox TV as it was announced Jimmy Johnson, former Hurricanes and Dolphins coach, had so deservedly made it to Canton, Ohio. I have not covered a man who took a loss harder, or who ultimately figured out how, when and why to quit coaching, before it ate him all up. Well done, J.J. Finalists who still could make it include longtime Dolphins stalwart linebacker Zach Thomas, former Hurricanes star running back Edgerrin James and receiver Reggie Wayne, and Fort Lauderdale-born/Dillard High receiver Isaac Bruce. Best of luck to all, but let it be Zach’s time. He has shouldered the weight of the wait. No. 3--The Bosa/Kumerow connection: Defensive end John Bosa was the Dolphins’ No. 1 draft choice in 1987 and DE Eric Kumerow was the top pick the next year. They were brothers-in-law. They were not great NFL players. Oh but the bloodlines were good! Now both of their sons are playing in the final four. For more local ties and the full column, please visit America and Super Bowl Host Miami Have a Rooting Interest Now. Tannehill, Please!

DESPITE LOSS TO LSU, CLEMSON ANOINTED FAVORITE FOR 2020: Ed Orgeron is still rasping his way through victory speeches for his LSU TIgers after last night's convincing win for the CFP national title, but it is vanquished Clemson seen as the favorite for the 2020 season. Caesars Sportsbook has Clemson 2-1 to win it all, Alabama 4-1, Ohio State 7-1, LSU 9-2 , Georgia 10-1 and Florida 15-1. Sportsbetting.ag's Heisman odds have Clesmon QB Trevor Lawernce (pictured) the trophy fave at 7-2, just ahead of Ohio State's Justin Fields at 4-1.

NFL DIVISIONAL ROUND PLAYOFFS: OUR PICKS, RESULTS: Update: We were 3-1 overall on our Divisional Round picks (missed Titans beating Ravens, like the rest of America), but only 1-3 against the spread (Chiefs' rout of Texans our only get). Here's how cruel the ATS gods can be: Packers were favored by four. I said they'd win by three. They won by five. A miss. The good news from the weekend: Tennessee and Ryan Tannehill are one win from reaching the Miami Super Bowl in his old stadium. Delicioso. Yes, please! ..... Original post: Road teams won three of four games last week on Wild Card Weekend as the road to the Miami Super Bowl began. Do not expect a repeat of that in the Divisional Round on Saturday and Sunday as eight teams winnow down to the final four. The home teams -- the four top seeds, all off byes -- are favored by a combined 31 points. Will the odds hold up? No upsets in store? Hint: I think the two NFC games will be a lot more competitive and upset-likely than the two AFC games. For all four of our Divisional Round picks, please visit the motherlode of prognostication I like to call NFL Divisional Round Gems.

Other most recent columns: Here's Winner Of the Dan Enos Cup For Biggest Disappointment in Miami Sports and Dream Ticket: Brady, Tagovailoa Both Dolphins in 2020? Also: Announcing Miami Dolphins' 2010-19 All-Decade Team / On Miami's Home Field, Gators Remind Canes How to Win Major Bowl Game and We Are The Champions: How South Florida Came to Own the State in High School Football.

OZZY AND ELTON: WHAT MORE NEED BE SAID?: Old friends and rock warriors Ozzy Osbourne and Elton John collaborate on the title track from Ozzy's forthcoming new album, Ordinary Man, out February 21. I'm prejudiced as a fan of both, but the song, a mid-tempo, is lush and quite epic. From the backing harmonies to the closing chords, there is a Beatle-esque feeling. Listen. You're welcome.

Select recent other columns: Why Minor Bowl, Small Opponent Should Be Of Major Importance to Miami Hurricanes / Fitzpatrick Gives Dolphins Luxury Of Options In 2020 Draft / Beating Canes Was Huge For FIU, But Even Bigger For Butch Davis / FIU's Historic, Magical Night A New Low For Canes / Le Batard Explains the Papi Mystery / If Jeter Doesn't Get In With Unanimous Vote -- Don't Blame Me! / Off Bad End to Down Season, Miami Hurricanes Should Decline Bowl Invite / Busch Stars In Emotional, Memorable End to Homestead's Championship Run / After Not Winning Enough, Are The Dolphins Now Failing At Failing? / Canes Lose Hoops Opener, But It's Fans Who Disappoint / Disgraced Ref Donaghy Opens Up About Game-Fix Scandal / Why Is NBA Doing Business With Human Rights-Violating China In First Place? / Riley Introduces Butler -- 'Cause the Heat Don't Tank / Why Dolphins, Even Epic-Bad, May be Closer to Major Turnaround Than Canes / Quit Whining! Yes Dolphins Are Tanking, And Yes They Should / Dolphins' Ross Cannot Be Surprised By Major Fallout Over Trump Fundraiser / Le Batard on Miami Radio Turmoil: 'We Were Evicted' / Buoniconti: Hall of Famer, But Even Greater Off the Field / It Is Megan Rapinoe's World Cup -- On And Off The Field / An Era Ends As Panthers' Luongo Retires / O.J. Can Tweet What He Wants, But How He's Seen Is Not Up To Him / Inter Miami Aiming High With Barca's Suarez / End The Illogical Shame and Honor Schnellenberger / Why Tiger's Masters Triumph Is About More Than Golf / Transgender-Athlete Firestorm A Necessary Debate / Across the Rio Grande to the PGA Tour / From Dark and Empty to Top Of the World: Dan Le Batard at 50.

Revisit this blog often because it is updated regularly. The Associated Press Sports Editors 2018 writing awards ranked the blog's author as a Top 10 national sports columnist in the major-outlet category. Follow on Twitter @gregcote.