1) It's MONDAY, JANUARY 6. A heartfelt happy 90th birthday to the great Dolphins icon Don Shula (pictured in earlier days), who hit the milestone Saturday. Here's to many more! 2) Check out our Miami Dolphins book, 'Fins At 50,' on Amazon. It's the perfect (late) holiday gift for all the Dolfans in your life. 3) In The Previous Blogpost (ITPB): NFL Wild Card Weekend picks, Wade retires (Miami) and Woods' Masters (national) voted biggest sports stories of 2019 in year-end polls, Gators win Orange Bowl & more. 4) Join us on Twitter.com/gregcote. Also on Facebook and Instagram.

Our return to Le Batard Show: For those who've asked I'll be back on ESPN Radio tomorrow/Tuesday.

WILD CARD WEEKEND! ROAD TEAMS TAKE THREE OF FOUR: Update: Ouch. We were 0-4 straight-up and 0-4 against the spread on our WCW picks. That's a first. May it be a last, please? Original post: Off our record-setting 2018 season we've had a solid 29th year of NFL picks in the Miami Herald. Finished the regular season with a .663 winning percentage overall and .518 against the spread. Now all that matters are the 11 postseason games ahead culminating with the backyard Miami Super Bowl on February 2. For all four of our Wild Card Weekend picks -- including a pair of upsets! -- visit the motherlode of prognostication I like to call NFL Wild Card Weekend Gems.

HOT BUTTON TOP 10 (JANUARY 5-6): WHAT SOUTH FLORIDA SPORTS FANS ARE TALKING ABOUT: Our blog-exclusive Sunday-into-Monday feature is part week-in-review, part look-ahead. Hot Button means what's on our minds, locally and nationally, from a Miami perspective, as the sports week just past pivots to the week ahead. This week's HB10: 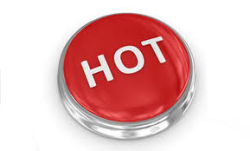 2. HURRICANES: Miami hiresg SMU hotshot as new offensive coordinator: UM has hired SMU offensive coordinator/QBs coach Rhett Lashlee, 36, for the same job here. Lashlee ran an exciting spread offense that was top 10 in the nation in points and yards this season. Canes fans are excited. Warning: (They were excited about Dan Enos, too, once).

3. HEAT: Miami tops Portland in Whiteside's return: Miami sits pretty in third place in the East at 26-10, with Justise Winslow, who has missed 26 games, finally close to returning from his back injury. Team beat Portland -- and Hassan Whiteside -- Sunday evening, with Whiteside mostly booed throughout the night.

4. UM HOOPS: No. 2 Duke schools Canes men: UM men fell to 9-4 with Saturday's 95-62 home loss to Duke and next plays at No. 7 Louisville Tuesday. Meanwhile No. 23 Canes women gell to 9-5 after Sunday's home loss to Florida State, and now face another top-10 foe in Louisville.

5. PANTHERS: Cats win at Pittsburgh: Florida is 22-20 after Sunday's 4-1 win at Pittsburgh that lifted the Cats to a tie for the final playoff spot at midseason. Team has won seven of past 10 and now plays four straight at home.

6. DOLPHINS: Tagovailoa decision expected Monday: Alabama quarterback Tua Tagovailoa, recovering from a hip injury, has said he will announce Monday whether he'll entre the NFL Draft or return to the Crimson Tide. Many NFL teams -- the Dolphins perhaps highest among them -- will see their draft plans shaped by that decision.

9. COLLEGE FOOTBALL: Seven days 'til LSU-Clemson title game: Two 14-0 teams ready for the College Football playoff championship in New Orleans, with LSU a 5 1/2-point favorite and the over/under inching up toward 70. Will either remember to pack a defense for the trip?

Missing the HB10 cut: We appear to be inching closer to war with Iran. Have a nice Sunday, everybody! ..... Great to see Dolphins great Zach Thomas make the list of 15 finalists for the Pro Football Hall of Fame. Now get him to Canyon, voters! ..... Florida beats Virginia in the Orange Bowl. Miamians still can't believe they had to watch Florida beat Virginia in the Orange Bowl ..... Update: Countdown now 2,359 days (give or take) until Miami hosts its first match in soccer's 2026 World Cup. 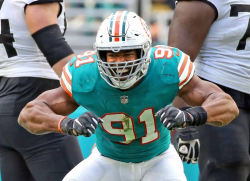 SIFTING THROUGH THE LOSING, WE ANNOUNCE THE MIAMI DOLPHINS' 2010-19 ALL-DECADE TEAM!: In another few days you will have broken a social faux pas but for now you can still wish people a Happy New Year without them looking at you funny. There are rules for these things. For example, when introducing your new head coach in early January, you probably don’t want to begin the news conference by wishing everyone a happy Thanksgiving, as Washington Redskins owner Daniel Snyder did this week. That got me thinking the window is closing to name the Miami Dolphins’ All-Decade Team for 2010 to 2019, so let’s get to it. First I will pause a second for all of your snide comments and thoughts, like, a team that went 69-91 in the decade, made one playoff and won zero playoff games — did they have any good players? Well, a few, yes. So let’s bid auld lang syne to the past decade by remembering the Dolphins who were the least bad, relatively speaking. Pictured is the most obvious choice for the team: Cameron Wake. Here is our Dolphins’ All-Decade Team, after which we will name the players of the decade from the Dolphins, Heat, Panthers and Marlins. To see our team and get our full latest column, please visit Announcing Miami Dolphins' 2010-19 All-Decade Team.

Other most recent columns: On Miami's Home Field, Gators Remind Canes How to Win Major Bowl Game and We Are The Champions: How South Florida Came to Own the State in High School Football.

THE LIST: SUPER BOWL RECORDS OF 2019 PLAYOFF TEAMS: Ranked by most victories:

Select recent other columns: Why Minor Bowl, Small Opponent Should Be Of Major Importance to Miami Hurricanes / Fitzpatrick Gives Dolphins Luxury Of Options In 2020 Draft / Beating Canes Was Huge For FIU, But Even Bigger For Butch Davis / FIU's Historic, Magical Night A New Low For Canes / Le Batard Explains the Papi Mystery / If Jeter Doesn't Get In With Unanimous Vote -- Don't Blame Me! / Off Bad End to Down Season, Miami Hurricanes Should Decline Bowl Invite / Busch Stars In Emotional, Memorable End to Homestead's Championship Run / After Not Winning Enough, Are The Dolphins Now Failing At Failing? / Canes Lose Hoops Opener, But It's Fans Who Disappoint / Disgraced Ref Donaghy Opens Up About Game-Fix Scandal / Why Is NBA Doing Business With Human Rights-Violating China In First Place? / Riley Introduces Butler -- 'Cause the Heat Don't Tank / Why Dolphins, Even Epic-Bad, May be Closer to Major Turnaround Than Canes / Quit Whining! Yes Dolphins Are Tanking, And Yes They Should / Dolphins' Ross Cannot Be Surprised By Major Fallout Over Trump Fundraiser / Le Batard on Miami Radio Turmoil: 'We Were Evicted' / Buoniconti: Hall of Famer, But Even Greater Off the Field / It Is Megan Rapinoe's World Cup -- On And Off The Field / An Era Ends As Panthers' Luongo Retires / O.J. Can Tweet What He Wants, But How He's Seen Is Not Up To Him / Inter Miami Aiming High With Barca's Suarez / End The Illogical Shame and Honor Schnellenberger / Why Tiger's Masters Triumph Is About More Than Golf / Transgender-Athlete Firestorm A Necessary Debate / Across the Rio Grande to the PGA Tour / From Dark and Empty to Top Of the World: Dan Le Batard at 50.

APSE-HONORED WORK: The Associated Press Sports Editors 2018 writing awards ranked us a Top 10 national sports columnist in the major-outlet category. Thanks, APSE. Here are the five nominated columns that earned the honor: At Doral, an annual tradition since 1962 is replaced by silence, and by what's missing / Marlins' Jose Fernandez statue is divisive yet has a chance to serve a greater purpose /NFL has moral obligation to help Buonicontis and Kiicks while it limits future suffering / What led to El Clasico Miami began with Joe Robbie's unlikely, accidental love of soccer / With 59 home runs, Stanton still had a magic season. Just hope this wasn't goodbye. [Note: This link to our APSE-honored work will appear here through the weekend and be gone starting Monday].