1) It's SATURDAY, DECEMBER 28. Hope y'all had a wonderful and  Merry Christmas and are having a great holiday season! Scroll to previous blogpost for results of latest Dolfan Satisfaction Meter postgame poll. 2) Personal note: I'm burning a bunch of leftover vacation time this month, in case you wondered why I haven't been in the Herald much lately. Bonus points to you if you noticed! 3) Check out our Miami Dolphins book, 'Fins At 50,' on Amazon. It's the perfect holiday gift for all the Dolfans in your life. 4) In The Previous Blogpost (ITPB): Dolphins beat Cincinnati with DSM postgame poll, Hot Button Top 10 & more. 5) Join us on Twitter.com/gregcote. Also on Facebook and Instagram.

DOLPHINS-PATRIOTS, PLAYOFF-DECIDING TOP GAMES, UPSETS: OUR NFL WEEK 17 PICKS: Off our record-setting 2018 season we've had a mostly solid 29th year of NFL picks thus far in the Miami Herald. We’re running solid at .665 overall and at .521 against the spread after rocking an 11-6 straight-up and 9-6-1 ATS last week. For all of our Week 17 picks to close the regular season, including Dolphins at Patriots, playoff-clinching top games and big upsets, please visit the motherlode of prognostication that I like to call NFL Week 17 Gems.

G13: LOUISIANA TECH 14, HURRICANES 0 IN INDEPENDENCE BOWL: MIAMI FAILS MISERABLY TO END A DOWN SEASON ON UPSWING: Original post: They're playing a Conference USA opponent in a third-tier bowl game. There are UM fans who consider this an indignity -- beneath the program. But this is what you get when you finish 6-6. You get what you are given. You take what you can. But there are stakes 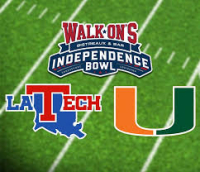 for the Canes in today's 4 p.m. Independence Bowl vs. Louisiana Tech (on ESPN) from Shreveport, La. It's the difference between finishing with a winning record or a losing record. It's also about Manny Diaz and his team doing what it has repeatedly failed to do this disappointing season: Perform well again an underdog opponent when given extra time to prepare. Think Central Michigan. Think FIU. Miami has underperformed against (supposedly) lesser foes. Will it yet again? UM is not good enough to take anybody lightly, and La-Tech is 9-3 and has won five bowl games in a row. By contrast, UM's bowl record is a sad 1-8 since 2008. Yet Miami is a 6-point favorite despite losing four players who'll skip the game for the NFL Draft, including senior linebacker Michael Pinckney. I expected Jarren Williams and N'Kosi Perry both to see action at QB for Miami. I also expect UM's defense to rise up. But this is a big game for Louisiana Tech. Can Diaz convince his team it is for the Canes, too? We'll see. Cote's pick: Hurricanes. 30-21. Watch for season-finale Canesfan Satisfaction Meter postgame poll online and directly below right after today's game ends.

CANESFAN SATISFACTION METER: 2019 FINAL: 5.8%: Results are certified in the latest -- and season's last -- of the Miami Herald’s Canesfan Satisfaction Meter

postgame polls, and they show 5.8 percent final approval in the wake of Thursday's 14-0 loss to underdog Louisiana Tech in the Independence Bowl in Shreveport, La., leaving the Hurricanes' final 2019 season record at 6-7. That is the third-lowest total in the 11-year history of the CSM, and the worst since 2014. The CSM is your invitation after every Hurricanes game to vote on your overall satisfaction with the team and season in a continuing weekly gauge of how UM football fans are feeling. Criteria for voting is your own, but I suggest you consider the most recent game’s performance and caliber of opponent, the season as a whole, the program’s direction and your overall degree of optimism -- all in the context of reasonable expectations. Because this was the final poll, I suggested added emphasis on the season as a whole. Online voting determines the weekly verdict, which is final the morning after one full day of voting. In this case that was around 10 a.m. today/Saturday.

NFL WEEK 16 PIX 'N FANTASY RESULTS: NFL picks -- Yes! Went a nifty 11-5 overall and a solid 9-6-1 against the spread in our Week 16 Herald picks. Houston winning by 3 pushed for the tie. Nailed our Upset of the Week with Packers winning at Vikings ("Aawwk!"), and also called Miami's mini-upset of Cincy and had underdog Rams and Cardinals with points. Strong week! ..... LeBatard Show fantasy (18-team PPR) -- Izzy Gutierrez beat Mike Ryan for the championship. Greg's Lobos after an 8-5 regular season finished 9-7 after qualifying for the championship-round playoffs. ..... Friends n' family fantasy (10-team PPR) -- Greg's Lobos, after a 7-6 season that qualified for the championship-round playoffs, fizzled and finished 7-9. Chris Cote lost to his wife Christie for the league title.

Our most recent other work: We Are The Champions: How South Florida Came to Own the State in High School Football / Why Minor Bowl, Small Opponent Should Be Of Major Importance to Miami Hurricanes and Fitzpatrick Gives Dolphins Luxury Of Options In 2020 Draft. Also: Beating Canes Was Huge For FIU, But Even Bigger For Butch Davis / FIU's Historic, Magical Night A New Low For Canes / Le Batard Explains the Papi Mystery / If Jeter Doesn't Get In With Unanimous Vote -- Don't Blame Me!

Additional select recent columns: Draft Uncertainty Means Dolphins Need to Hedge Bets. His Name Is Kaepernick / Off Bad End to Down Season, Miami Hurricanes Should Decline Bowl Invite / Busch Stars In Emotional, Memorable End to Homestead's Championship Run / The Best Will Race For Title At Homestead. But Here Is What NASCAR Is Missing And Needs / After Not Winning Enough, Are The Dolphins Now Failing At Failing? / The Player Who Started the Glory Days in  for Canes Football / Canes Lose Hoops Opener, But It's Fans Who Disappoint / Disgraced Ref Donaghy Opens Up About Game-Fix Scandal / Why Is NBA Doing Business With Human Rights-Violating China In First Place? / Riley Introduces Butler -- 'Cause the Heat Don't Tank / Why Dolphins, Even Epic-Bad, May be Closer to Major Turnaround Than Canes / Quit Whining! Yes Dolphins Are Tanking, And Yes They Should / Dolphins' Ross Cannot Be Surprised By Major Fallout Over Trump Fundraiser / Le Batard on Miami Radio Turmoil: 'We Were Evicted' / Buoniconti: Hall of Famer, But Even Greater Off the Field / It Is Megan Rapinoe's World Cup -- On And Off The Field / An Era Ends As Panthers' Luongo Retires / O.J. Can Tweet What He Wants, But How He's Seen Is Not Up To Him / Inter Miami Aiming High With Barca's Suarez / End The Illogical Shame and Honor Schnellenberger / Why Tiger's Masters Triumph Is About More Than Golf / Transgender-Athlete Firestorm A Necessary Debate / Across the Rio Grande to the PGA Tour / From Dark and Empty to Top Of the World: Dan Le Batard at 50.