1) It's THURSDAY, DECEMBER 19. Personal note: I'm burning a bunch of left over vacation time this month, in case you wondered why I haven't been in the Herald as much lately. Bonus points to you if you noticed. 2) Check out our Miami Dolphins book, 'Fins At 50,' on Amazon. It's the perfect holiday gift for all the Dolfans in your life. 3) In The Previous Blogpost (ITPB): Dolphins fall at Giants with DSM poll, Hot Button Top 10 & more. 4) Join us on Twitter.com/gregcote. Also on Facebook and Instagram.

AFTER 7-FOR-7 SWEEP OF STATE TITLES, SOUTH FLORIDA IS KING OF HIGH-SCHOOL FOOTBALL: The football teams were at the same hotel in Daytona Beach this past weekend for the state championships when a bunch of parents and fans of Miami Northwestern High mingled in the lobby as the Miami Columbus team returned from seeing a movie. "Better win or you can’t come 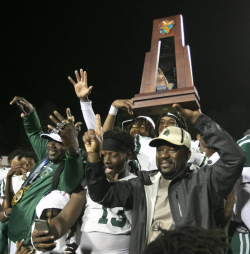 back to the 3-0-5!" Columbus coach Dave Dunn heard a Northwestern fan call out. The message, though said in jest, was probably only half-kidding. Prep football is a serious proposition held to the highest standard in Miami-Dade. In Broward, too — as the neighboring counties just proved in historic fashion. It was an unprecedented show of force from South Florida. There are eight FHSAA divisions based on school size, and Dade/Broward brought home a record seven state championships. Call it a clean sweep, because South Florida has no football team in the smallest division geared to rural schools. (If only some of our local high school mojo might rub off on the Miami Hurricanes, who at 6-6 are preparing to face Louisiana Tech in the Independence Bowl, or the Dolphins, slogging along at 3-11). Stating South Florida’s case as America’s capital of high school football: Columbus wins Class 8A (the largest division) for the school’s first state title in the sport. Fort Lauderdale’s St. Thomas Aquinas wins Class 7A for the school’s state-record 11th championship, breaking a tie for most with Jacksonville Bolles. Miami Central -- pictured celebrating with coach Roland Smith holding trophy -- wins Class 6A for the school’s sixth state crown. Northwestern wins Class 5A for the school’s third state title in a row and seventh overall, the most by a Miami-Dade team. Miami’s Booker T. Washington wins Class 4A for the school’s sixth crown. Hollywood’s Chaminade-Madonna wins Class 3A for its third title and third in a row. And Hialeah Champagnat wins Class 2A for that school’s third state championship. From the continuation of the Aquinas juggernaut to the maiden title for Columbus, it has been a December like no other for local high school football. I explore why in my newest column, after speaking with four of the championships coaches Monday to get their thoughts on So-Fla prep teams are so damned good. To read the full column, visit We Are The Champions: How South Florida Came to Own the State in High School Football.

Our most recent other columns: Why Minor Bowl, Small Opponent Should Be Of Major Importance to Miami Hurricanes and Fitzpatrick Gives Dolphins Luxury Of Options In 2020 Draft. Also: Beating Canes Was Huge For FIU, But Even Bigger For Butch Davis / FIU's Historic, Magical Night A New Low For Canes / Le Batard Explains the Papi Mystery / If Jeter Doesn't Get In With Unanimous Vote -- Don't Blame Me! / and Draft Uncertainty Means Dolphins Need to Hedge Bets. His Name Is Kaepernick.

NFL PIX 'N FANTASY RESULTS: WEEK 15: ANOTHER TOUGH WEEK: NFL picks -- Ouch. Managed 9-7 overall but only 6-9-1 against the spread this past week (with Seattle winning by 6 the push for the tie). Had Atlanta with the points at San Fran but not a lot else went right. Need to rally and finish strong. ..... LeBatard Show fantasy (18-team PPR) -- Bad finish. Greg's Lobos after an 8-5 regular season dropped a second straight in the playoffs, 92.2 to 69.4 to Lorenzo despite 26.7 from Patrick Mahomes. It's Mike vs. Stugotz for the league title. ..... Friends n' family fantasy (10-team PPR) -- Another bad finish. Lobos after a 7-6 season lost a second straight in the playoffs, 185-114 despite 31 from Saquon Barkley. Can't feel too bad losing to a crazy 185. It'll be my son Chris vs. his wife Christie for the league crown.

Additional select recent columns: Off Bad End to Down Season, Miami Hurricanes Should Decline Bowl Invite / Busch Stars In Emotional, Memorable End to Homestead's Championship Run / The Best Will Race For Title At Homestead. But Here Is What NASCAR Is Missing And Needs / After Not Winning Enough, Are The Dolphins Now Failing At Failing? / The Player Who Started the Glory Days in  for Canes Football / Canes Lose Hoops Opener, But It's Fans Who Disappoint / Disgraced Ref Donaghy Opens Up About Game-Fix Scandal / Why Is NBA Doing Business With Human Rights-Violating China In First Place? / Riley Introduces Butler -- 'Cause the Heat Don't Tank / Why Dolphins, Even Epic-Bad, May be Closer to Major Turnaround Than Canes / Quit Whining! Yes Dolphins Are Tanking, And Yes They Should / Dolphins' Ross Cannot Be Surprised By Major Fallout Over Trump Fundraiser / Le Batard on Miami Radio Turmoil: 'We Were Evicted' / Buoniconti: Hall of Famer, But Even Greater Off the Field / It Is Megan Rapinoe's World Cup -- On And Off The Field / An Era Ends As Panthers' Luongo Retires / O.J. Can Tweet What He Wants, But How He's Seen Is Not Up To Him / Inter Miami Aiming High With Barca's Suarez / End The Illogical Shame and Honor Schnellenberger / Why Tiger's Masters Triumph Is About More Than Golf / Transgender-Athlete Firestorm A Necessary Debate / Across the Rio Grande to the PGA Tour / From Dark and Empty to Top Of the World: Dan Le Batard at 50.