The case for Dolphins' Flores as Coach of Year, Fitzpatrick as starting QB in '20. New column; plus Hurricanes won't but should decline bowl invite, tonight's Cowboys-Bears pick, latest Back In My Day, NFL Week 13 Pix 'n Fantasy results & more

1) It's THURSDAY, DECEMBER 5. Check out our Miami Dolphins book, 'Fins At 50,' on Amazon. It's the perfect holiday gift for the Dolfans in your life. 2) In The Previous Blogpost (ITPB): Dolphins upset Philadelphia with DSM poll, NFL Week 13 picks & more. 3) Join us on Twitter.com/gregcote. Also on Facebook and Instagram.

DOLPHINS' FLORES COACH OF YEAR? FITZPATRICK STARTING QB IN '20? LET ME EXPLAIN!: In this strangest of Miami Dolphins seasons, two things to consider have arisen that both would have seemed sheer lunacy only five weeks ago. Before stating these two things and then explaining I should first emphasize that I do not have a concussion and have not been drinking. 1. Brian 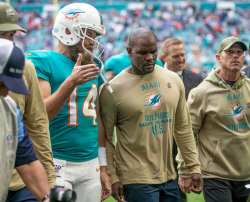 Flores should be considered for NFL Coach of the Year. 2. There is a circumstance and a case to be made why Ryan Fitzpatrick might still be the Fins’ starting quarterback beyond this season. (The QB and coach are pictured). Let me explain quickly, before anyone has time to draw up papers to have me committed under the Baker Act. First, Flores. He won’t win Coach of the Year, of course. Might not even get a vote, because voters are lemmings beholden to formulaic thinking. And for this award you start with what coach improved by the most wins. That’s why the 49ers’ Kyle Shanahan (4-12 to a current 10-2) or somebody like that will win. But Flores should be considered, by outside-the-box thinkers, because nobody else inherited his situation, or has made more of less. It isn’t even close. At 0-7 he was the captain of the S.S. Tanktanic. His team was a laughingstock. Epic bad. His own front office undercut him by trading away top players for future draft picks. Those not mocking the Dolphins were excoriating them. ESPN’s Domonique Foxworth (needing a ladder to scale that high horse) called the overt tanking "morally reprehensible." All Flores did was take a winless, laughed-at team bound for 0-16 and keep it believing in itself. Now Miami is 3-9, with a few more winnable games ahead starting Sunday at the Jets and old coach Adam Gase. OK. On to Fitzpatrick and the quarterback spot. This 37-year-old man with the lumberjack beard has proved, again, why he has survived 15 NFL seasons across eight teams. He is an affable, always smiling leader whose love of playing is infectious. He has earned the right to be kept by Miami in 2020 as a backup. But the idea he might start next season is worth consideration. On merit, first, he is capable to lead a team. He has led this one. Today Fitzpatrick’s QBR rating of 64.1, measuring overall efficiency at the position, ranks No. 8 in the league. And that is despite the worst offensive line and the worst running game in the NFL! A strategy worth considering for Miami is to go with Fitzpatrick one more season and instead devote draft capital in 2020 to the team’s many other urgent needs such as O-line, an edge rusher and a running back. What we are seeing from Fitzpatrick gives the Fins the luxury to seriously weigh such an option. Miami could then turn its eye to the quarterback-of-the-future in the 2021 draft, when the available first-round bounty will include Clemson’s Trevor Lawrence, Ohio State’s Justin Fields — and maybe Alabama’s Tua Tagovailao, who has been pondering bypassing the ‘20 draft ever since his season-ending hip injury on Nov. 16. To read my full latest column, please visit Fitzpatrick Gives Dolphins Luxury Of Options In 2020 Draft.

HURRICANES AT 6-6 HAVE ZERO TO CELEBRATE, SHOULD DECLINE BOWL INVITE: Here is what should happen this week in a news conference on the University of Miami campus. It won’t. I 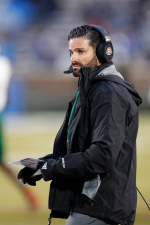 am dreaming. But it should. Director of athletics Blake James and head football coach Manny Diaz (pictured) are standing side by a side, a united front. Neither man is smiling. James clears his throat to speak first. "After much consideration the past few days," James would begin, "Manny and I are in agreement the football season just past did not meet the high expectations of the University of Miami, and therefore — although eligible to play in a postseason bowl — the Hurricanes will decline any and all invitations to do so." Diaz adds: "A bowl game should be a reward, and this season has not been one to earn such a thing. Neither myself, my staff nor our players have proved worthy of the prize that is a bowl trip." Canes fans are digesting and trying to fathom a season that had ended 6-6 with consecutive losses — first the comeuppance of ignominy against cross-county rival FIU, then Saturday’s closing defeat at Duke. UM of course will soon perfunctorily accept an invitation to some Grade D bowl game, almost as if it doesn’t have a choice and must. It might be the Independence, the Music City, the Sun or some other lame pity prize the Canes should be embarrassed to attend. Plainly, there is too much incentive (read: money) involved to turn down a bowl invite. The Atlantic Coast Conference, for example, gets $4 million for every one of its teams that goes bowling. But, again, I am not talking about what will happen, but what should in an ideal world. This UM football program should be licking its wounds and closing the sad ledger on this season now, not putting on display one last time one of the most disappointing teams in all of college football. To read our full recent column, please visit Off Bad End to Down Season, Miami Hurricanes Should Decline Bowl Invite.

Our most recent other work: Beating Canes Was Huge For FIU, But Even Bigger For Butch Davis. Also FIU's Historic, Magical Night A New Low For Canes / Le Batard Explains the Papi Mystery / If Jeter Doesn't Get In With Unanimous Vote -- Don't Blame Me! / and Draft Uncertainty Means Dolphins Need to Hedge Bets. His Name Is Kaepernick.

NFL PIX 'N FANTASY RESULTS: WEEK 13: OK, PLAYOFFS!, PLAYOFFS!: NFL picks -- OK. We were a so-so 9-7 overall and a pretty good 9-7 against the spread last week. Nailed our Upset of the Week with winless Bengals beating Jets. Also had a mini-upset with Steelers over Browns, a 'dog-with-points in Bills covering vs. Cowboys, and a rare Exacto (perfect score) in Packers' 31-13 win over Giants. ..... LeBatard Show fantasy (18-team PPR) -- Playoffs! Greg's Lobos improved to 8-5 with a 103.1 to 95.7 win over Sarah Spain led by Patrick Mahomes' 21.5 points. We're in the playoffs as the No. 5 seed and face Stugotz in the first round. Mahomes is frontrunner for MVL honors (Most Valuable Lobo), but Mike Evans has not been ruled out. Go 'Bos! ..... Friends n' family fantasy (10-team PPR) -- Playoffs! Lobos lost their regular-season finale 134-129 to finish 7-6 but still made the six-team playoffs as the No. 5 seed. Dalvin Cook and Deshaun Watson are neck  and neck for MVL (Most Valuable Lobo) honors, and we'll need them both, and Cook healthy, as the playoffs begin. Go 'Bos!

NEW 'BACK IN MY DAY': FITNESS NUTS!: After several weeks' hiatus, a new Back In My Day returned to ESPN and the Le Batard Show today. Hope you enjoy...