1) It's FRIDAY, NOVEMBER 22. Check out our Miami Dolphins book, 'Fins At 50,' on Amazon. 2) In The Previous Blogpost (ITPB): Dolphins fall at home to Buffalo with DSM poll, Kyle Busch wins NASCAR crown at Homestead, Hot Button Top 10 & more. 3) Join us on Twitter.com/gregcote. Also on Facebook and Instagram.

Tonight's Colts-Texans pick: Can Houston bounce back at home, on a short week, after its thorough spanking by Baltimore? Find out here: Week 12 Thursday Gem.

New No. 1 in update Herald NFL QB rankings: A new guy sits atop our Top 20 chart, but it will be temporary, because he has a bye coming up this week and also because the men who sit second and third have both played one fewer game. To see it all, visit Herald Week 11 NFL QB Rankings.

DOLPHINS-BROWNS, TOP GAMES BIG UPSETS -- OUR NFL WEEK 12 PICKS: Off our record-setting 2018 season we've had a solid first half-plus of our 29th year of NFL picks in the Miami Herald. Last week was peachy at 11-3 overall and OK at 7-7 against the spread. We hit on a mini-upset with Jets winning at Washington and had a pair of 'dogs-with-points in covers by Falcons and Cardinals. Now here are our Week 12 picks, including Dolphins at Browns, our Game of the Week and our Upset of the Week (which could be one and the same), and all the rest. Please visit the motherlode of prognostication that I like to call NFL Week 12 Gems. Tonight's separate Colts-Texans Thursday night pick is linked above; also find it here.

LE BATARD'S BIG REVEAL ON PAPI'S ABSENCE, FUTURE ON 'HIGHLY QUESTIONABLE': "Where’s Papi?" The mystery is finally solved. Fans of the Miami-based ESPN TV show Highly Questionable have wondered for the past two weeks why regular Gonzalo "Papi" Le Batard, father of main host Dan Le Batard, has not been on. The reason had been unexplained, and in the void of information concerns arose that it might be a health issue. Dan heard the question and fans’ concerns more than anyone, so he finally addressed them. "My father is in good health, he’s just been punching a clock for 50 years and doesn’t want to necessarily be working every day," Le Batard told listeners midway through Thursday’s radio show. "He had a pretty hard time telling me he didn’t want to be working every day. There was a palpable sadness when I sat down in the chair and [for the first time] he wasn’t next to me." Papi has for now at least retired from HQ as a regular fixture but may still appear occasionally "when he wants to," Dan said. For the full story, visit Le Batard Explains the Papi Mystery.

A BASEBALL HALL OF FAMER VOTER (ME) SOUNDS OFF: So I am proudly a Baseball Hall of Fame voter, and the 2020 ballot came out this week, and this happened Tuesday inside the ESPN studios on South Beach, where I was co-hosting the “Dan Le Batard Show With Stugotz.” During a commercial break, I volunteered how funny it would be if I was the only elector nationwide to not vote for Derek Jeter as a first-ballot inductee. It was discussed how the ensuing controversy would be such perfect fodder for the radio show — underlined by the idea it would be a Miami Herald writer (one raised as a Red Sox fan!) besmirching the otherwise pristine ballot of the Yankees icon who now happens to be part-owner and CEO of the Miami Marlins. For the full column, please visit If Jeter Doesn't Get In With Unanimous Vote -- Don't Blame Me!

GROWING DRAFT UNCERTAINTY MEANS DOLPHINS SHOULD HEDGE BET. WHY NOT KAEPERNICK? NEW COLUMN: The phrase "hedging one’s bets" is gambling parlance that has broadened to more general use. It means doing something to offset a potential future loss. The Miami Dolphins have cause to do that right now. And the opportunity is in front of them, as 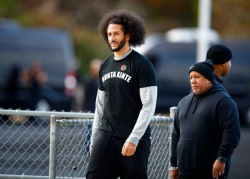 obvious as a neon sign blinking in a dimly lit barroom. You may have heard the name: Colin Kaepernick. Bear with me for a second. I know the very utterance of those five syllables is an anathema to many of you. Those many evidently include 32 NFL teams, considering Kaepernick has effectively been blackballed from making a living into a third year now over the anthem-kneeling protest he started in 2016. (You know by now that the protest is over social injustice. Right? That it has zero to do with any disrespect of the flag or the military or any of that other stuff his haters put forth. You know it, and the NFL knows it, and yet illogically -- stunningly -- his ban continues). The whole idea of the weekend's group audition (Kaepernick is pictured arriving) was silly anyway, considering Kaepernick has been a free agent available to anyone for the past 2 1/2 seasons. Any team could have flown him in for a tryout, a physical, an interview — whatever. Nobody did. Will anybody now sign him after Saturday's dog-and-pony show? Who knows. But I know of at least one team that should. Nobody needs a quality quarterback more than the Dolphins. And two factors — Cincinnati being 0-10 to Miami’s 2-8, and Tua Tagovailao’s hip surgery Monday throwing his once-vaunted draft status into some doubt — means the Fins might not be in a position to get their first-choice QB in next April’s draft. They might still, yes, but signing Kaepernick would be hedging that bet in a big way. It would be a safety net for Miami. I have been on the Kaep-to-Miami bandwagon before, but Tagovailoa’s latest serious injury coupled with the Bengals’ ongoing master class in How Properly to Tank torque up the urgency and need. "I’ve been ready. I’m staying ready. And I’ll continue to be ready," Kaepernick said Saturday. "The ball’s in their court." To read my full latest column, visit Draft Uncertainty Means Dolphins Need to Hedge Bets. His Name Is Kaepernick.

Our most recent other columns: Busch Stars In Emotional, Memorable End to Homestead's Championship Run. Also: The Best Will Race For Title At Homestead. But Here Is What NASCAR Is Missing And Needs / After Not Winning Enough, Are The Dolphins Now Failing At Failing? / The Player Who Started the Glory Days in  for Canes Football / Canes Lose Hoops Opener, But It's Fans Who Disappoint / Le Batard On Return To Air, Latest Event / and Disgraced Ref Donaghy Opens Up About Game-Fix Scandal.

NFL PIX 'N FANTASY RESULTS: WEEK 11: SOLID, STILL ALIVE, SITTIN' PRETTY: NFL picks -- Solid. We were 11-3 overall and a scrambling 7-7 against the spread last week. Love the first and will abide the second. Missed our Upset of the Week but hit on a mini-upset (Jets over Skins) and a pair of 'dogs with points ..... LeBatard Show fantasy (18-team PPR) -- Still alive. Greg's Lobos improved to 6-5 with a 95.8 to 71.7 win over ESPN news producer Jonathan Whyley. Got 21.5 from Randall Cobb to help survive off games by Patrick Mahomes and Mike Evans. With two weeks left we sit one spot out of the 8-team playoffs (on a tiebreaker). Must sweep the last two, or win one and pray ..... Friends n' family fantasy (10-team PPR) -- Sittin' pretty. Lobos improved to 7-4 with a fortunate 105-104 win -- fortunate became my opponent had Melvin Gordon on Monday night, and Mel (thankfully) fell one point short. Got a nice 24 from Michael Gallup, a last-minute start. Won despite only 3 from Deshaun Watson. Have not hyte clinched but are looking really good for the 6-team playoffs. Go 'Bos!

Select other recent columns: Why Is NBA Doing Business With Human Rights-Violating China In First Place? / Riley Introduces Butler -- 'Cause the Heat Don't Tank / Why Dolphins, Even Epic-Bad, May be Closer to Major Turnaround Than Canes / Quit Whining! Yes Dolphins Are Tanking, And Yes They Should / Dolphins' Ross Cannot Be Surprised By Major Fallout Over Trump Fundraiser / Le Batard on Miami Radio Turmoil: 'We Were Evicted' / Buoniconti: Hall of Famer, But Even Greater Off the Field / It Is Megan Rapinoe's World Cup -- On And Off The Field / An Era Ends As Panthers' Luongo Retires / O.J. Can Tweet What He Wants, But How He's Seen Is Not Up To Him / Inter Miami Aiming High With Barca's Suarez / End The Illogical Shame and Honor Schnellenberger / Why Tiger's Masters Triumph Is About More Than Golf / Transgender-Athlete Firestorm A Necessary Debate / Across the Rio Grande to the PGA Tour / From Dark and Empty to Top Of the World: Dan Le Batard at 50.